2) Humira is currently growing approx. 30% YOY in the US and 10% ex US (constant currency). In the US, management is seeing strong double digit prescription growth and ongoing Humira price increase opportunities. CFO Chase emphasized Humira’s compelling value proposition to payers based upon Humira’s efficacy and safety record.

4) CFO Chase stated that mgmt is not expecting US biosimilar competition until 2020 or beyond due to longer-dated patents; Mgmt expressed confidence in branded Humira’s position with payers relative to biosimilars, based on access to 90%+ of managed care lives (harder to switch a large base) vs modest discount offered by biosimilars.

6) Increasing focus on strategy and BD with a newly created Chief Strategy Officer post; large deal may be unlikely before 2017. Mgmt attributed the recent hire of a veteran M&A banker, Henry Gosebruch (see our 9/16 note) as Chief Strategy Officer to Abbvie’s heightened focus on strategy and business development – areas in which the company felt it could enhance. Mgmt has continued to look at potential deals after the Pharmacyclics acquisition, while noting that smaller deals are more likely in the near term than larger ones given the company’s step-up in debt levels.

7) CFO Chase wouldn’t predict the dividend increase percentage for 2016, but we are now thinking it could be at least 15% since 2016 EPS growth should be 20%. 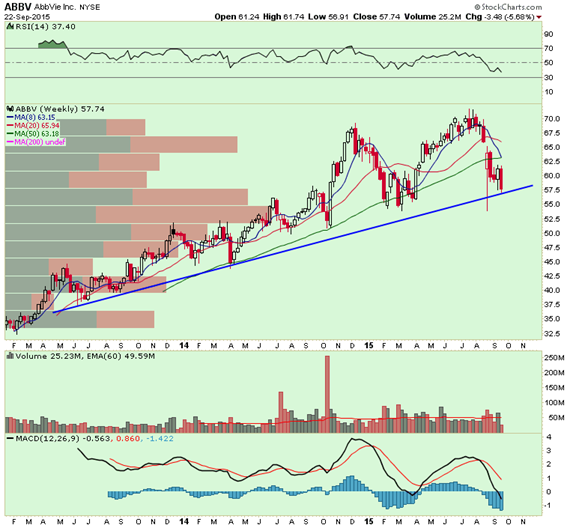