Activision (ATVI) Sets up for Breakout

On May 24, 2016, Blizzard’s team-based shooter, Overwatch, will be coming to PlayStation 4, Xbox One, and PC. Early access to the open beta on all platforms already has millions of people playing. Releasing “World Of Warcraft” movie on June 10th. Expected to launch its highly anticipated World of Warcraft expansion Legion end of August. Call of Duty game and its new maps are still selling very well on all platforms and is also now generating in-game purchases. Also on June 10th there is the launch of Major League Gaming (MLG) Anaheim Open,  a two-day Call of Duty tournament. ATVI partnered with Facebook to stream this event.

ATVI acquired MLG earlier this year, expecting to build what it calls “a new ESPN of eSports…”.  According to SuperData Research The eSports market is valued globally at around $750 million with projections of $1.9 billion by 2018. In February, ATVI completed their acquisition of King Digital for $5.9 billion, best known for Candy Crush game. According to company data, this increased their monthly average users by 463 million accounts for  23% of total revenue (for 3 months ended 03/31/2016). Other popular games in this segment are Farm Heroes and Pet Rescue.

ATVI is slightly behind Netflix in terms of engagement with content with over 10B hours spent playing games and 42B hours total including spectating.

This is second in series of our bullish views presented on Activision. Here is previous view after King Digital acquisition in November 2015. See HERE. The part we like the most about this growth story is recent announcement as reported by WSJ on May 12 about tie up with Facebook to begin publishing daily live programming. That’s brings incremental revenue growth that we don’t believe is fully accounted for in consensus view. 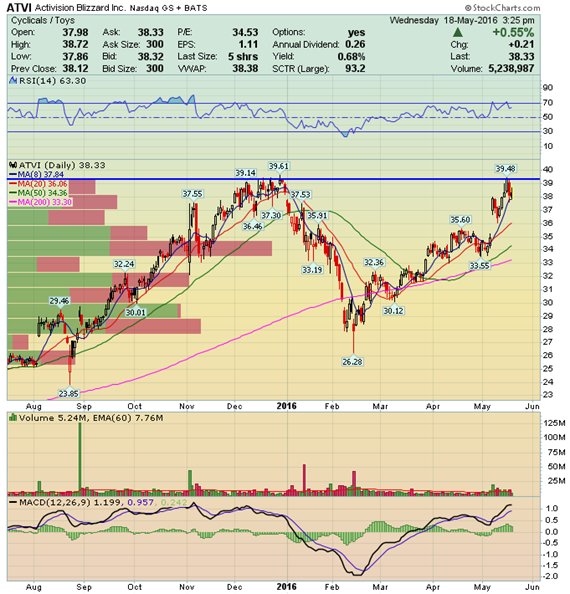