In case you missed it after the close today, Abbott Laboratories (ABT) was covered HERE following their appearance at the American Diabetes Association Conference. In addition to ABT, I thought I would briefly cover some of the other diabetes names.

JPMorgan saying that Dexcom had a relatively quiet conference, though they did see results from a few smaller studies evaluating the usage of G6. First, a study evaluating usage of CLARITY, Dexcom’s diabetes management application, found that usage of CLARITY reports resulted in improvement in TIR and less time in hyperglycemia, with clinically and statistically significant improvements when CLARITY notifications were used as well. Similarly, a trial evaluating the use of G6 predictive alerts found statistically significant improvements in the number, severity, and duration of rebound hyperglycemia events when using the G6 with “urgent low soon” alerts compared to G5, which does not offer the feature.

JPMorgan highlighted that Medtronic’s MiniMed 780G US pivotal trial demonstrated good efficacy and safety data, though time-in-range (TIR) came in below prior guidance for >80%, as expected following the Q4 earnings call. Overall time in range for the 157 Type 1 diabetes patients evaluated with 780G came in at an impressive 75.4%, an improvement from 68.8% at baseline (p=0.001). While this represents an improvement from 71% TIR on 670G, these results are a step below the >80% TIR bar that management set at ADA last year, but largely in line with what we were expecting following recent management commentary.

Robert W. Baird said there were several important updates from the company at ADA this weekend, one being that the company has entered into an agreement to receive up to $337M in funding over the next several years from Blackstone Life Sciences to fund four identified R&D programs in the company’s Diabetes segment. Because they don’t cover MDT, they’ll let others opine on the pros and cons of this Blackstone news, although from a high level they believe the deal makes sense for MDT as they can only imagine how hard it has likely been for the company’s diabetes group to credibly argue for incremental investment dollars from the broader company as diabetes segment growth has lagged relative to other parts of the larger MDT business and as cash flow and R&D funding uncertainties have likely grown for MDT due to COVID-19.

Credit Suisse commenting that in addition to the clinical trial updates on 780G, MDT also provided an update on other near-term pipeline opportunities:

770G: New hardware set with a smartphone display app allowing for new age indication expansion down to 2-year olds. MDT has submitted the U.S. PMA filing. MDT’s plan will be to allow for a free software upgrade to the 780G algorithm once approved in the U.S. (780G has obtained CE Mark)

Zeus: Goal for the Zeus sensor is to reduce finger sticks significantly and only requires day one calibration. MDT intends to submit regulatory data on Zeus by the end of the summer.

Synergy: MDT’s new disposable form factor with disposable design, eliminating the need for a separate transmitter, reducing volume of the product by 50% and eliminating the need for over-tape, which MDT’s believes has been a significant source of discomfort for PWDs. Synergy will utilize the same algorithm as Zeus, targeting calibrations on day 1 only. MDT has filed for approval for a U.S. IDE study.

Robert W. Baird would say that looking at the real-world data for Control-IQ, the three things that stood out to them was that TIR consistently improved across all three age ranges shown, there was a strong improvement across the consolidated group to 78% TIR (including 80%+ for patients 65 yo and older and even near 70% for the more difficult-to-manage 14-17 yo cohort), and time-in-loop across all patient groups was 96%.

Finally, they also got their first look at pediatric (2-6 yo) data for Control-IQ, and while this was just a small safety trial (n=12) and they suspect Control-IQ approval in this age range remains a ways off, “we thought initial data looked good from a TIR standpoint and we’re encouraged that the trial met both of its primary endpoints.” 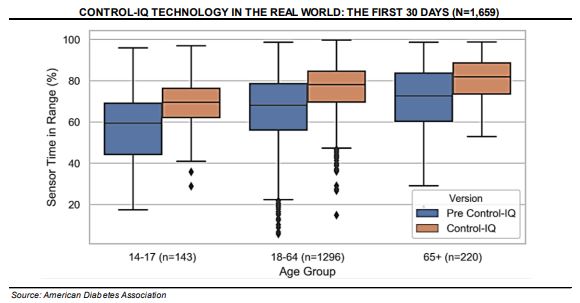