The American Academy of Allergy, Asthma & Immunology (AAAAI) held its annual meeting and joint congress with the World Allergy Organization (WAO) this past weekend in Orlando, Florida (March 2nd to the 4th). Among the many academic and medical discussions, two biopharmaceutical companies, Aimmune Therapeutics (AIMT) and DBV Technologies (DBVT) presented research data in their ongoing studies of peanut allergy therapies.

Presently, a cure or treatment for peanut-related allergies does not exist, prevention is the standard. Accidental reactions are often counteracted by epinephrine injection (EpiPen or generic alternative).

Both Aimmune and DBV Technologies therapies are desensitizing approaches in which patients are exposed to minute amounts of the allergen, in this case peanut protein, with the dosage gradually increased over a period of months. This is technically not a drug, however both companies are following FDA-set guidelines for Biologic License Application to eventually market their products and facilitate health coverage reimbursements.

A 2011 Childhood Food Allergy analysis conducted on approximately 40,000 children in the U.S.A. showed 8% prevalence rate. Of the top allergy-causing foods, peanuts topped the list at 25%, followed by milk at 21.1% and shellfish at 17.2%. Tree nuts at 13.1% and eggs at 9.8% rounded out the top-5. Peanut allergies are typically a life-long condition whereas milk and eggs, for example, tend to be outgrown as a person reaches adulthood.

Peanut allergy prevalence in the U.S.A. and the “big five” EU countries is expected to keep increasing from an estimated 7 million to over 8 million by 2030.

AR-101 is Aimmune’s lead candidate with studies now having advanced into Phase III. This is an oral therapy in the form of a pill, a departure from typical injection-delivered antigens, and its intent is to help patients build-up a strong level of protection against peanut protein.

Interestingly, the Double-Blind Placebo Control Food Challenge (DBPCFC) showed continued benefit after the end of dosing – compared to the placebo group, there were none that required epinephrine to counteract allergic reactions. 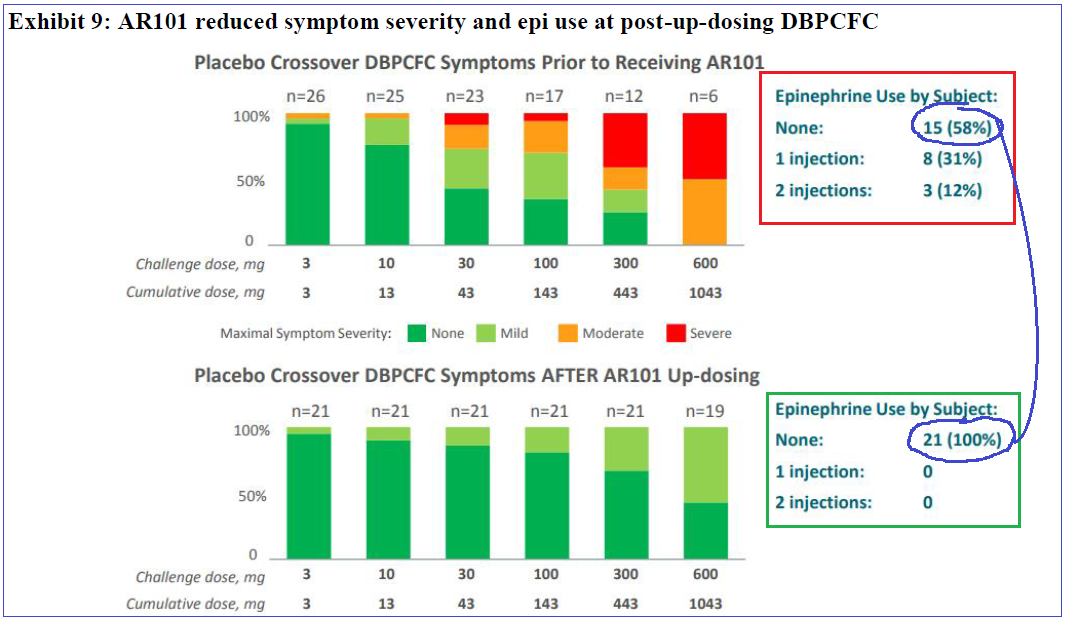 PALISADE efficacy and tolerance is across all age groups in the study, an important note as DBV Therapeutics (DBVT) Viaskin appears to have far less benefit for patients past 11 years of age. Tolerance levels of highest dosage (1,043mg) can also be viewed as a positive for EU approval as their approval bar is more stringent; it sets the 1,000mg level as the threshold.

After market close on same date of the data release, management announced a 5.5M secondary offering priced at $32.00, nearly 9% below closing price and subsequently shares declined to near-$30.00 level.

On March 4th, a full PALISADE Phase III presentation was given at AAAAI’s joint congress which further reinforced AR-101’s efficiency and tolerance with 50% of patients tolerating the 1,000mg dosage. As well,  during a company-hosted panel, physicians provided unanimously positive feedback, commenting that the resulting data was “practice-changing”, and patient interest was significant. Response rates were nearly identical in three age groups, an important result which could benefit labeling with regulators as it wouldn’t be directed or restricted to a certain demographic.

Symptom severity data remained very supportive of the treatment’s tolerability with approximately 90% of patients exhibiting only ‘none’ or ‘mild’ symptoms. 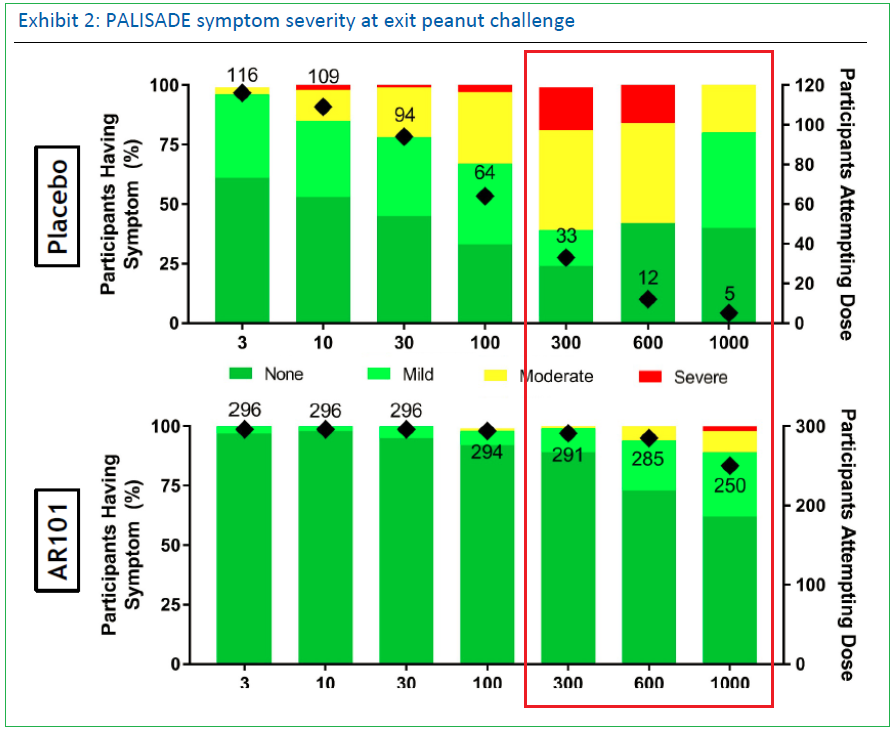 As with Aimmune’s therapy, Viaskin is a tolerance-building product that is introduced into the patient’s system via a patch placed on the skin (via skin… Viaskin). 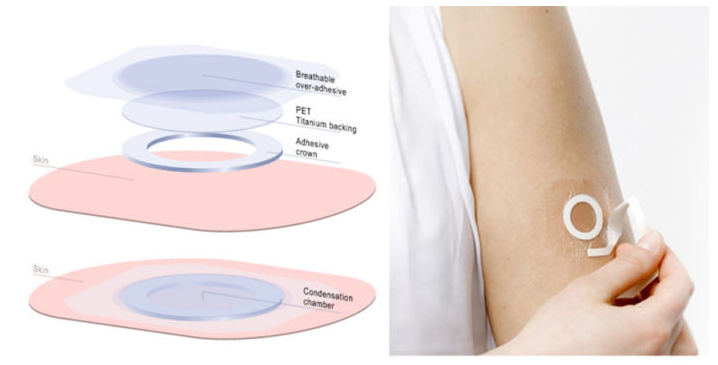 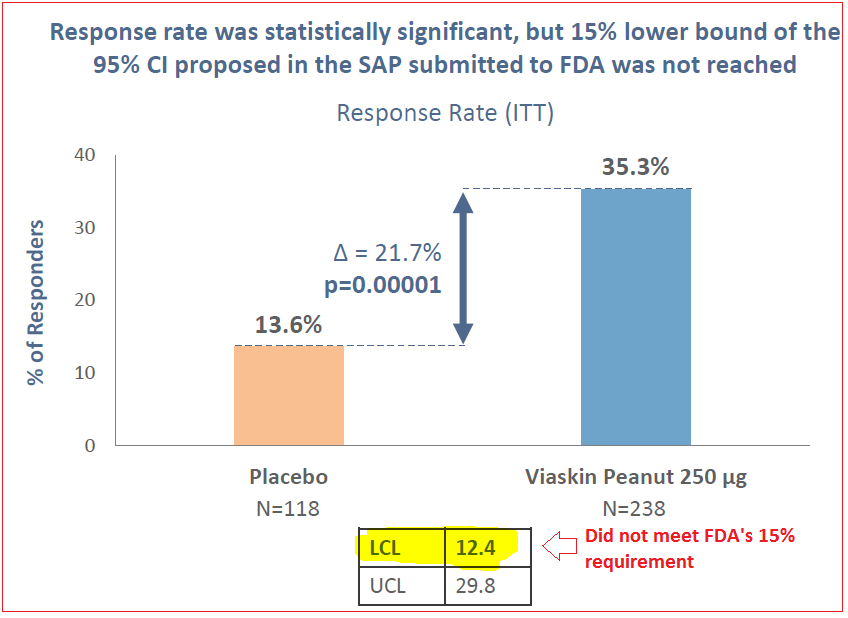 Viaskin’s peanut allergy treatment also has shown other quirks, it appears to work much better on children aged 2-11 than outside those ages, also when doses are increased, the response does not, in fact it goes lower. At this time, management has not been able to explain the reason for these outcomes.

Along with peanut allergy, the same method is being used to develop a therapy for milk allergy. On February 26th, Phase II/B trial preliminary results were released evaluating safety and efficacy in 198 patients for cow’s milk allergy. A statistically significant desensitization was observed in children aged 2-11, but again, the product did not show a meaningful effect on adolescents, leading analysts to question if it may be a challenge or issue with the epicutaneous (on-skin) delivery method. 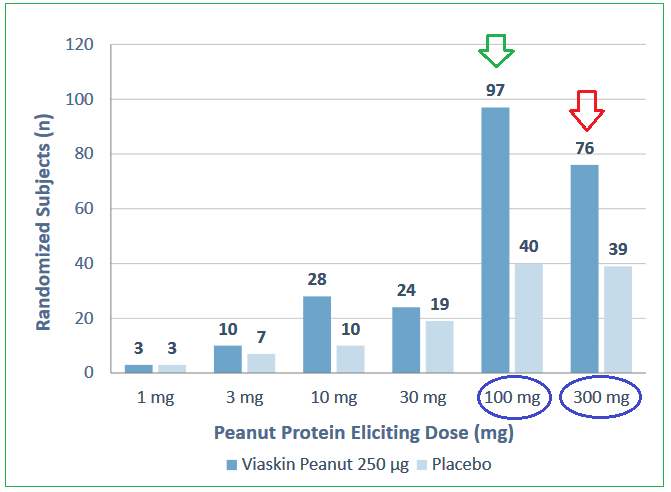 The peanut desensitization market opportunity is estimated to be approximately $1.9B in peak global risk-unadjusted sales for Aimmune’s AR-101, as estimated by RBC Capital. The analyst points out that nearly three-quarters of allergists are awaiting FDA-approved therapy for their patients, and under 15% use some sort of “home-brew” treatment, a very small, sub $50M market.

It is possible for both these peanut-allergy therapies to coexist, however DBVT’s has seen its share of issues while Aimmune’s has been more …. immune. Both companies are also working, or intending to start on other food allergy treatments. Presently, analysts favor Aimmune’s PALISADE, with most attributing 85%-90% probability of success. 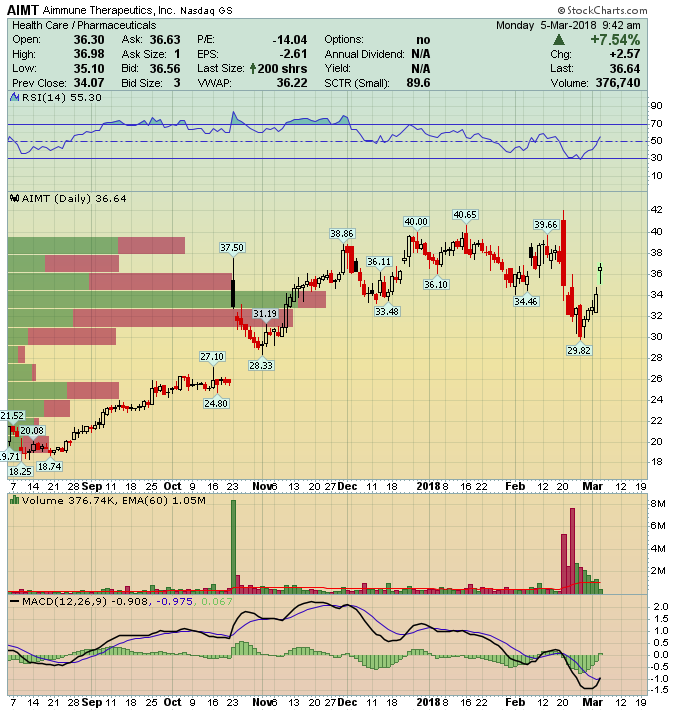