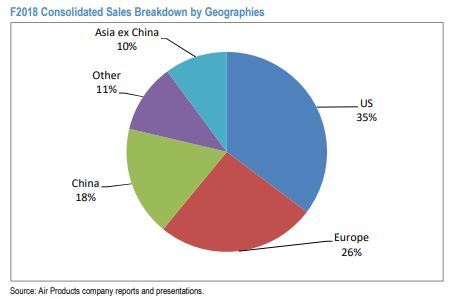 CEO Seifi Ghasemi would provide updates on a handful of different Asian-based projects, as well as announce two new contracts.

“As expected, the Lu’An project continues to run very well and contribute to our results. The Jazan air separation unit got built on budget and on time with excellent safety performance. We continue to work toward financial closing of the Jazan gasifier and power project by the end of this calendar year. We are continuing our discussion with the YK Group for the very large coal to syngas project. And the Juitai project is going with expected on-stream in 2022. Building on this momentum, we just announced the completion of an asset buyback arrangement with Jinmei, a leading coal chemical company in China. We purchased two ASUs previously owned by Jinmei and entered into a long-term contract to supply oxygen and nitrogen for the customers’ coal-to-clean fuel project in Shanxi province. This project is another great example of the customers’ increased confidence in outsourcing their industrial gases.”

In addition, the CEO commented on the two new contract awards in received in Korea: One from MEMC to provide industrial gases for its new 300-millimeter wafer fab and the other from POSCO Chemical to supply oxygen and nitrogen for its new cathode material manufacturing complex.

BAML analyst Steve Byrne highlighted that while many chemical companies saw significant Y/Y revenue declines in Q2 from globally depressed demand, Air Products bucked this trend with slightly positive volumes in the Americas and EMEA, and 10% volume growth in Asia from new projects. Even more impressive was the 4-5% price gains in each of the 3 regional segments.

JPMorgan analyst Jeffrey Zekauskas would reiterate his Overweight rating on the stock saying a handful of new projects can result in the commitment of $10b. “It is for this reason that Air Products now trades at premium to its peers. Air Products’ gasification project with Lu’An Clean Energy came on stream in F4Q:18. We think Lu’An is now responsible for more than 50% of Air Products’ incremental Asian volume. The return on assets for the Asian segment of Air Products increased from 12.6% in 3Q:F18 to 14.6% in 3Q:F19 due in large part to the Lu’An joint venture. Industrial gas prices in Asia have risen, which is also lifting asset returns. The incremental return on assets in Asia y/y is 38.4%. The improvement in ROA is providing investors with confidence in projects yet to come on stream.”

Finally, since June 1st, JaguarScan is showing a 100% bullish bias with the following notable trades still in open interest: 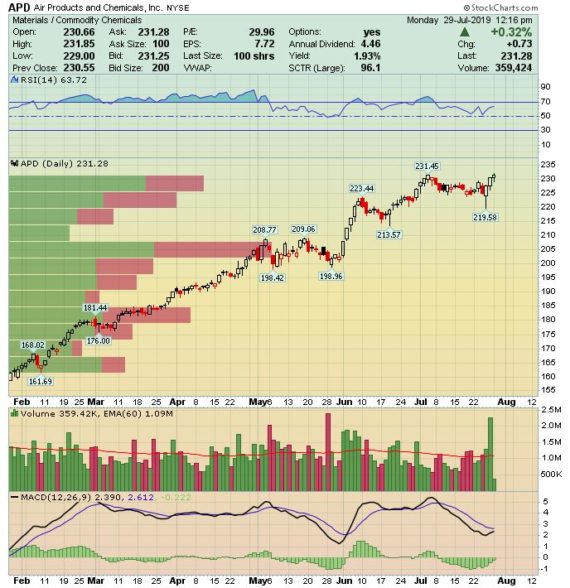