On April 27th, Akamai posted better than expected Q1 results with $568MM in revenue versus $564MM Street estimates. Performance & Security segments reported revenue above Street estimates, while Media revenue was below. Q2 guidance was in line with expectations.

RBC Capital’s take on management’s 2H commentary was “incrementally cautious”.  They point out that Media Delivery growth remains under pressure due to Akamai’s two largest media customers drawing down usage, potentially going below their combined 6% past usage. At the same time, they did mention their third and fourth ranked customers had increased their usage CDN share, and that Cloud Security (14% of revenues) should continue to see very strong, 40%+ growth, in 2016E.

Credit Suisse’s post-earnings Q1 research note outlines their Neutral stance, pointing out that M&E contract cycles that Akamai benefited from in the past have peaked, and that the company will experience “incremental pricing pressure (with peaks and troughs driven renewal waves), and declining margins in the M&E segment for at least the near- to medium-term”. As with RBC, the loss in revenue from the top two accounts as well as margins have reduced their confidence in Akamai’s ability to profitably grow at a rate to justify upside from the current valuation level.

The revenue stream shows a shift from CDN (Media Deliver) to their other segments:

Essentially, tech giants such as Google (GOOGL), Apple (AAPL), Facebook (FB), Netflix (NFLX) and Microsoft (MSFT) have built, or are building their own Customer Delivery Networks (CDN). Amazon (AMZN) has also entered the CDN market as a provider, becoming a direct competitor to Akamai.

The OTT services such as YouTube and Netflix content keep seeing the most growth, unfortunately for Akamai, they don’t have their content being delivered via third-party CDNs.

Interestingly, short interest has been increasing since January, nearly doubling to levels not seen since 2014. 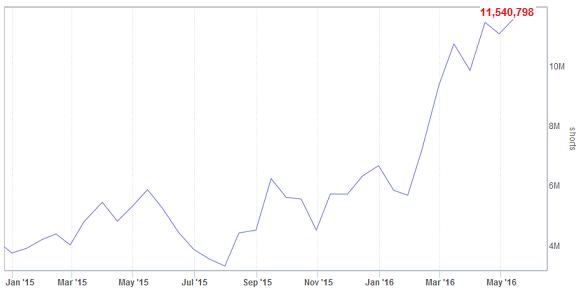 Of course Akamai isn’t going out of business anytime soon, they still generate nearly $600MM in revenues and net income well above $100MM per quarter. Shares  are well off 2016 lows and technically the chart shows a pause at accumulation levels, albeit on very low volume. Whether long-term stock value continues its recovery to 2015’s $70+ levels  is very likely dependent on Q2 results (July 26th). However, if this interim May/June traffic data persists or worsens, then there is a likelihood of earnings coming below consensus estimates. 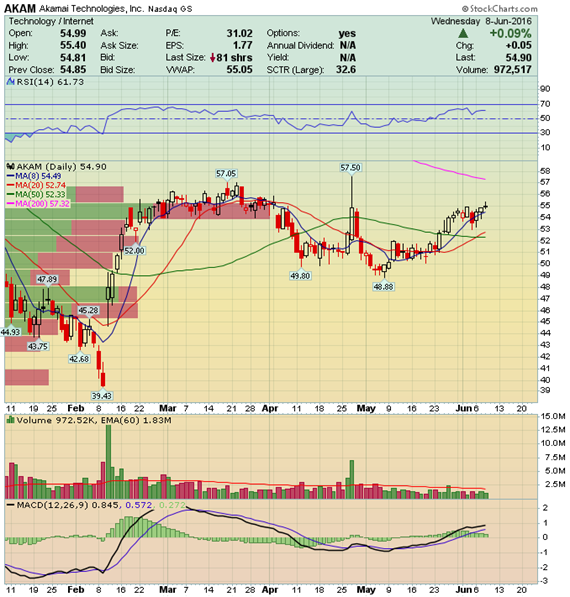