Alphatec Holdings is a medtech company that works closely with clinical experts to design and develop systems to effectively and efficiently drive the future of spine surgery. Their innovative platforms focus on simplifying procedures for the surgeon with the ultimate objective of improving clinical outcomes. The company has been around for nearly 30 years and has gone through a number of maturations over that time frame, which included working with physician-owned distributors several years ago to the sale of its international business to Globus Medical (GMED) in 2016 (the company is largely prevented from competing internationally until 2023), to the takeover of the newer management team about two years ago. The company has always been a pure play spine provider, but under the new management team, led by CEO Pat Miles**, ATEC has re-positioned itself in the marketplace as a highly differentiated product provider.

**CEO Pat Miles has been in his role since joining the company in October 2017. Prior to Alphatec, Mr. Miles was with NuVasive (NUVA) from January 2001 through September 2017. 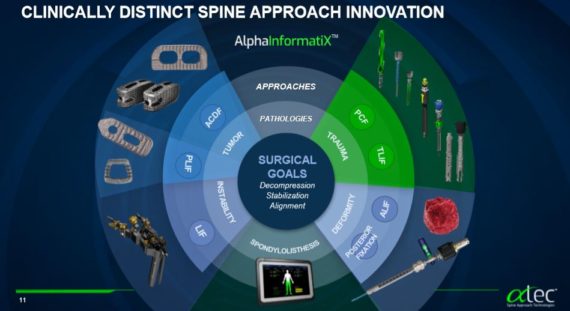 Per Piper Jaffray’s initiation note from August 5th, analyst Matt O’Brien notes that given that ATEC is essentially prevented from competing internationally through 2023 due to its divestiture of its outside U.S. business to GMED in 2016, the focus should needs to be on the domestic market opportunity for the company. Fortunately for ATEC, as seen below, the domestic market for spine products is by far the largest (including biologics and robotics where the majority of the sales shown below are in the U.S.), making it a significant opportunity for the company going forward.

“Within the U.S. hardware market, ATEC’s products can be used primarily in thoracolumbar and cervical fusion, and deformity procedures, which amount to around $4.6B in aggregate. Although the growth rates in these categories is fairly modest, we would point out that some sub-categories, such as minimally invasive surgery (MIS), are growing quickly, which should provide a bit more of a tailwind for ATEC than other companies in the space.”

CFO Jeff Black added that the third quarter was their fifth consecutive quarter of Y/Y revenue growth. It saw 8% sequential growth in Q3, which is typically a flat to down quarter in spine. And in Q3, it delivered their largest U.S. revenue quarter since the second quarter of 2016.

CEO Pat Miles would comment on their success from their new products. “And if we got 35% of our revenue from the new products, that would be good. So, new product revenue contribution for Q3 was 42%. That’s versus 3% in Q3 of 2018. Then we said, gosh, 12 products would fulfill the obligation. We are 11 in year-to-date, and we feel really, really good about our 12.”

Following earnings, Lake Street analyst Brooks O’Neil raised his price target to $10 from $7 saying investors should recognize the “clear evidence” of the start of the company’s “positive transformation” in its Q3 results.

Piper Jaffray had previously said that while Alphatec offers a broad complement of spinal products, they believe its SafeOp technology, which it acquired in early 2018, represents the real differentiator that the company needs to capture physician mindshare and corresponding share in the large spine market.

“SafeOp provides nerve monitoring capabilities for a surgeon looking to perform lateral spine surgery. Specifically, the technology allows the clinician to locate nerves in the psoas muscle during dilation (getting down to the spine) with EMG (electromyography). More importantly, SafeOp provides the clinician with SSEP (somatosensory evoked potentials), which monitors the health of nerves during the procedure. This is an extra function that no one else on the market has integrated into their neuromonitoring systems and it also provides the feedback in real time (typically SSEP is delayed and subject to interpretation by a human sitting in the corner of an OR), which streamlines the procedure and reduces the likelihood of a severe neurological complication.” 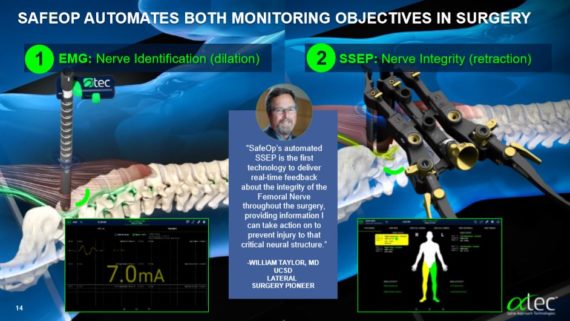 On the earnings call, CEO Pat Miles commented that the one priority that creates significant enthusiasm is, what they’re calling Alpha Informatics, but is the SafeOp part, with a full launch this month:

“And so if you start to think about us as a company, you say, gosh, if our mantra is we’re revolutionizing the approach to spine surgery, we better create distinction really within the lateral approach.”

“And so our opportunity to integrate SafeOp in a way that not only identifies and keeps a surgeon safe as to where the nerves are, but we can also tell how long has the nerve been retracted. And what makes that – we’re able to do that is really kind of a unique signal acquisition element, which is why we acquire the technology in the first place.”

Litigation – NuVasive (NUVA) filed a lawsuit against ATEC back in February 2018 alleging patent infringement. Since that point, there have been a variety of motions and petitions filed (including a couple of requests for a preliminary injunction, both of which were denied). The potential outcome and timing of this litigation is unknown. Additionally, NUVA filed a lawsuit against ATEC’s current CEO Pat Miles in October 2017, alleging he violated contractual obligations at NuVasive and diverted corporate opportunities away from them and to Alphatec. Similar to the patent litigation, the timing and ultimate outcome of this lawsuit are unknown.

Short interest – Per NASDAQ, you will clearly see that short interest over the last several months has been trending higher. 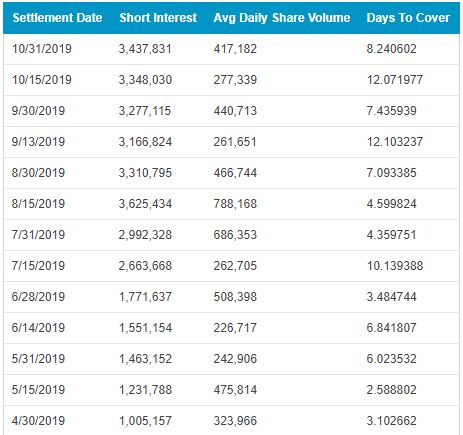 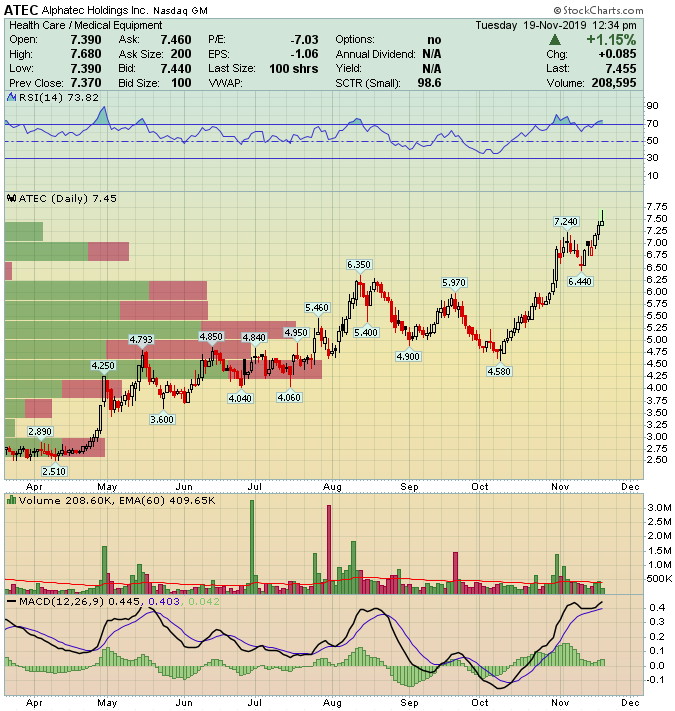