Apple (AAPL) – Not a One-Trick iPony

iPhone: that’s what everyone associates Apple (AAPL) with. Why not? It is their major cash flow generator with over $155 Billion in sales in FY2015, 65% of total company revenues,  all from just one product. However, recently there has been some attention towards another part of Apple’s revenue stream: Services. 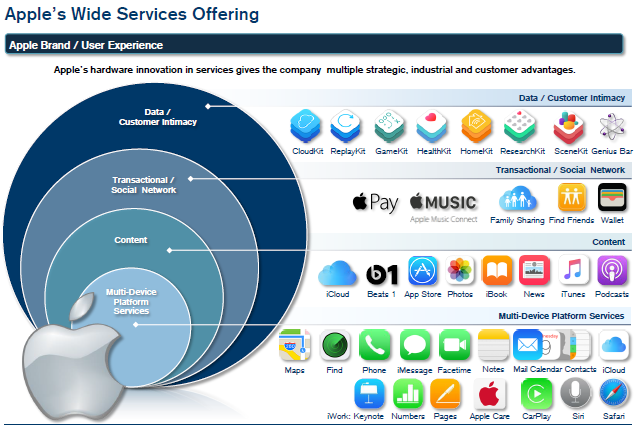 As a group, Services have many products within the segment; iCloud, Apple Pay, Apple Music, iTunes App Store, Wallet, Apple Care and 30 others (at mid-June’s count). Apple Streaming TV will be added to this when it is eventually launched.

App Store – Generating $6 billion a year in revenue, Apple nets 30% of every dollar brought in. With growth at 35% in last quarter, Apps & 3rd Party Content has a gross margin of 87% at net level. Nintendo’s (NTDOY) Worldwide Pokemon Go launch is already contributing to the coffers since its debut on July 6th, seemingly everyone on the planet has their head down staring into a mobile device. Macquarie Capital Securities analyst notes “As users build their Pokemon inventory, spending money becomes needed to store, train, hatch, and battle“. In other words, while the game app is free from Apple, if a player wants to advance and store more characters, purchases are necessary.

Apple Pay – While still in relative infancy in a highly competitive market, Pay is available in over 10 million locations globally and adding a reported 1 million users per week.  Apple’s recent $1 billion investment in Didi Chuxing could bolster revenues with integration into their hailing software. Didi is China’s huge ride-sharing company with over 87% of market share and nearly  11 million rides daily. In early August, Visa (V) announced Apple Pay support in Hong Kong and France with surveys showing that Mobile device usage is incrementally  increasing over PC.

Repeat Customers   – Apple has a huge Installed Base clientele. 600 million unique users on over 1 billion active devices as of last report, projected to reach 700 million and 1.4 billion respectively within the next 3-4 years. From these existing, loyal and repeat customers, Apple has seen a steady, increasing revenue stream. FY2015  result were $19.9 billion in net sales, a 10% y/y increase. 2Q16 revenue alone was at $5.99 billion, a 20% increase q/q.

ARPU growth – Average spend per user stands at $68 yearly, a number that could grow to $120 by 2020 according to Credit Suisse. This is just for Services segment. The analyst adds that long-term growth in services installment plans could make 55% of gross profits annuity-based, providing a steady amount of income for the company each year.

Eleven days later, AAPL confirmed that it had acquired health data startup Gliimpse earlier in 2016. Gliimpse compiles users’ personal health data information from labs, hospitals, and pharmacies into a single shareable report. The idea is that the data can be used to provide doctors with a complete medical record, but there is a possibility that some sort of monetizing method can be conjured.

AAPL has been quietly expanding its healthcare data collection and management program portfolio, it is yet unclear as to how it will benefit from their application.

Options are plentiful and very liquid trading large volumes daily. At times it is hard to discern bias in a particular strike due to high churn of opening and closing in the same session.

Post-earnings climb had been steady for two weeks before peaking at 15% gain. Mild pull-back so far with MACD and RSI both cooling down. Overhead volume congestion at $112.15 and support volume congestion just under $96. Chart has broken above declining trendline from April 2015. So far has not given many solid re-entry opportunities and might not do so anytime soon. 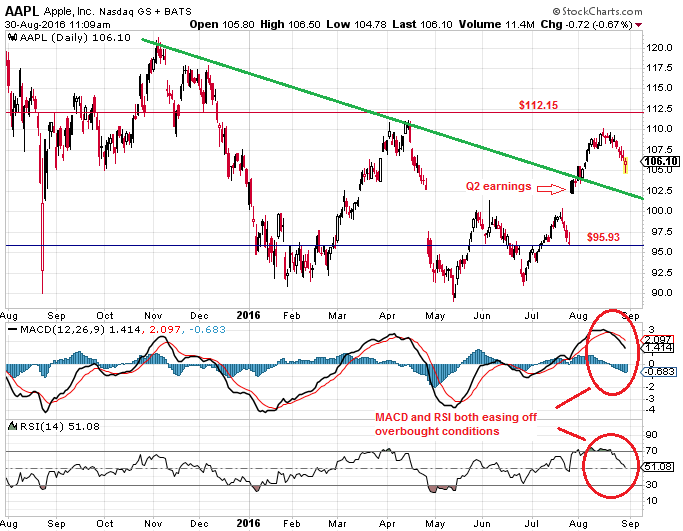 There is a tendency to focus too much attention to what everyone else is looking at. While 80-90% of Apple coverage is about iPhone production and sales, Services is quietly sneaking higher as a constant income generating beast. When the rest of the bystanders realize and start commenting about it, a multitude of future growth estimates could get revised as well as price targets.

To put it into perspective, Piper Jaffray believes that if Services was a separate entity from Apple and trading at a conservative 10x multiple, it would have a $139 billion market cap.