Credit Suisse’s Animal Tracks reports have shown increased numbers of pet adoptions since April and in the past six weeks Zoetis (ZTS), Idexx Labs (IDXX), VCA Antech (WOOF), Trupanion (TRUP), PetMed Express (PETS), among others in the industry, all have seen a resurgence in share prices since and have reported good-to-great earnings. 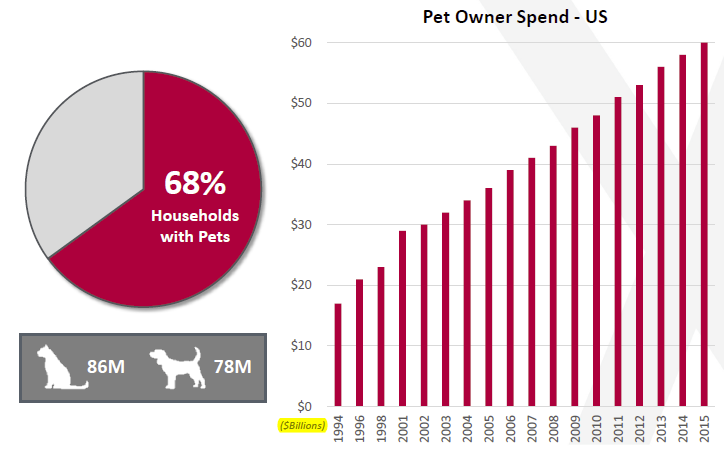 Galliprant – Approved by FDA March 2016 with commercial availability projected in Fall of 2016. Helps control pain and inflammation on dogs afflicted with osteoarthritis.

Aratana has entered into an agreement with Elanco, animal health segment of Eli Lilly (LLY), granting them licensing rights to help develop, manufacture and market Galliprant globally. The terms are for a $45 million upfront payment to PETX, with additional payments of up to $83 million based on sales & EU approval, as well as royalties ranging from mid-single to low double-digit percentages. Elanco will also pay 75% of all third-party development fees and expenses for pre-clinical and clinical trials that would be necessary for any further registration or regulatory approvals through the end of 2018. Jefferies note from April 26th estimates peak US sales at $76 million, European sales at $59 million for dogs and another $16 million for cats.

15 million dogs a year are diagnosed with osteoarthritis with two-thirds treated. PETX research suggests that 20% of all 80 million dogs in USA are afflicted. Galliprant showed to be efficient and well-tolerated by furry patients.

Entyce – Approved by FDA May 2016, Entyce is an oral liquid medicine that helps stimulate appetite in dogs. Commercial launch is planned for February 2017 at the North American Veterinary Conference in Orlando, Florida.

Entyce is a first-of-its-kind treatment approved by the FDA for innapettance. Over 10 million dogs have appetite-related issues annually, from a multitude of causes and up to now, veterinarians have only had recourse to non-approved therapies with unreliable efficacy or safety standards. PETX survey shows that 81% of vets feel there is a need for a specific treatment for this condition.

Nocita – ADUFA was filed in late June upon receipt of  its last of three major technical section completion letters for chemistry, manufacturing and controls. All indications that FDA approval will (should?) be on August 28.

According to trials, the post-operative analgesic can last as long as 72 hours, potentially offering relief to dogs and cats that undergo painful procedures and reducing the need for prescribed opiates and their associated side-effects. 19 million dogs and 14 million cats undergo surgical procedures each year. Survey results are very positive with 79% of vets indicating they would use this product within the first year.

Brent A. Standridge joined PETX at the end of June bringing with him three decades of of experience in U.S. and Canadian animal health markets. His previous position was a consultant for the generic veterinary medicine maker Putney, which was acquired by Dechra Pharmaceuticals in March 2016. Mr. Standridge also spent 28 years at Wyeth‘s animal health division, with 11of those years as Senior Vice President of Sales and Marketing of North America where he was responsible for all sales and marketing activities. Wyeth was acquired by Pfeizer (PFE) in 2009.

PETX is still largely in development phase and as not had any profits since inception. While the outlook does appear to be positive, there could be many hurdles, including dissolution of partnership along the way. Earnings are set to be released Thursday August 4th followed by a conference call next day, Friday August 5th at 08:30 EST.

Stock dropped by 30% in September 2015 after PETX announced that trials in AT004 & AT005 cancer B-cell Lymphoma treatments weren’t providing expected results in combination with chemotherapy. Shares have not recovered their pre-decline $20 price range.

There is a huge base at the $6.20 level from April of this year. Given the opportunity, there is a huge vacuum up to $14 and further on to $19. Price has been riding a rising trendline since its February lows at around $2.75. 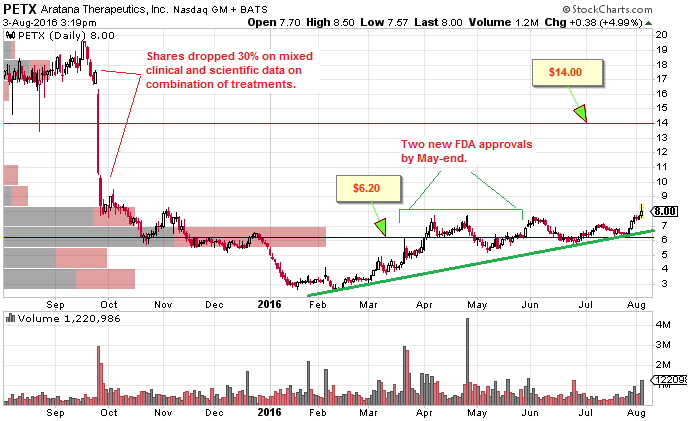 People’s mentality towards animal companionship and care is increasingly more compassionate; it isn’t uncommon these days for pet-parents to opt for treatments and surgery for an ailing pet costing hundreds and sometimes thousands of dollars whereas perhaps even twenty years ago attitudes were quite different. It’s also quite likely that aging populations want a friendly presence in their empty nests. For the younger generation, increasingly improved jobs and economic data suggest that  there is more income to take care of family members and that seems to be reflected in revenues of healthcare provider as well as therapeutic product manufacturers.

I’m heavily biased: I love animals, dogs in particular. I would spend any amount necessary to treat an adopted member of our family, and it is clear that I am not alone in this sentiment.