Arista Networks (ANET) reported 2Q earnings that achieved milestones in just about every financial metric during a record quarter, beat top and bottom line soundly and guided higher than analysts’ expectations. Arista retains the #1 spot in 100G segment with over 40% market share as the latest generation switcher/router technology acceptance has been strong. Their new products’ contributions increased from the 25% level to well over 30% in 2Q.

By the numbers, the company reported: 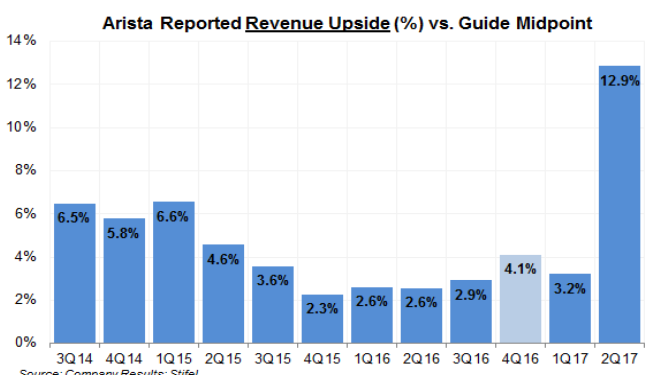 For the first time ever, crossed above $400 million revenue threshold during a quarter with $405.2 million total, saw 50.8% YoY sequential growth with demand surpassing expectations, showing broad-based demand for Arista’s products.

R&D spending declined QoQ to $70.9 million following the launch of R2 line of products which in turn required less outlay for prototype expenditures, however head count grew as did sales and marketing costs, up $1 million from last quarter to $34.6 million 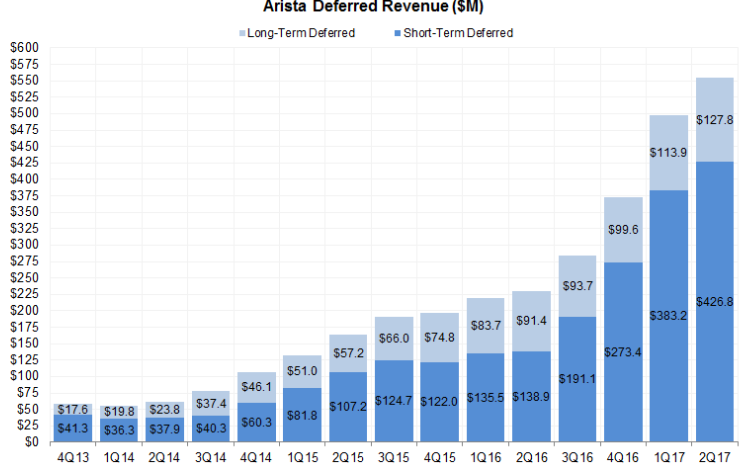 QoQ Revenue growth is expected to moderate as investment expenses to support the business are anticipated to outpace revenues. Nevertheless, revenues are forecast to remain above the $400 million mark, in the range of $405 million to $420 million. Gross margin was guided slightly lower at 61% to 64% and operating margin is also projected to be lower at 30% with the effective tax rate remaining unchanged.

During the post-earnings conference call, management said that they don’t see a repeat of the 36% operating margin which was a “pleasant surprise”, however a return to “normal behavior” at 30% which they expect was referred to as “a good healthy guide”.

Regarding Microsoft (MSFT), there aren’t any changes in the relationship and it will remain a very important partner growing to a 10%+ customer, and this despite their announcement that Azure would be using Cisco’s (CSCO) Nexus 9K line of switching products.

In reference to the present 100G cycle that started in 2016, the five-year duration should keep going through 2021 with almost every major cloud provider using the technology. The next step will be upgrading to the 400G cycle for which there should be some early adopters probably starting in 2019. As newer networks are being designed, compatibility and capability to the next-generation is being implemented to maintain the same spine chassis as the 100G to facilitate the switch-over when the time comes.

International business growth was mentioned as being very strong in 2Q, accounting for roughly 50% of new customer additions.

RBC Capital raised their price target from $135 to $160, maintaining their Sector Perform rating. Along with many of the points discussed above, the analyst points out that the data center switching market TAM is estimated at $12 billion for CY2017, and Arista has only about 15% of the primary market share. As the addressable market grows at a high-teens rate, Arista is anticipated to see their growth rate of 20%+ exceed that pace.

Stifel analyst keeps a Hold rating but raises target price from $145 to $165, saying that they were too early in stepping aside on the stock.

BofA raised their price from $165 to $185 while maintaining their Neutral rating. The analyst is “somewhat cautious” on heightened expectations and valuation with a positive bias citing trends being in favor of Arista.

BMO Capital kept their Outperform rating and raised the price target from $167 too $190.

JPMorgan upgraded shares form Neutral to Overweight and raised the price from $144 to $186. 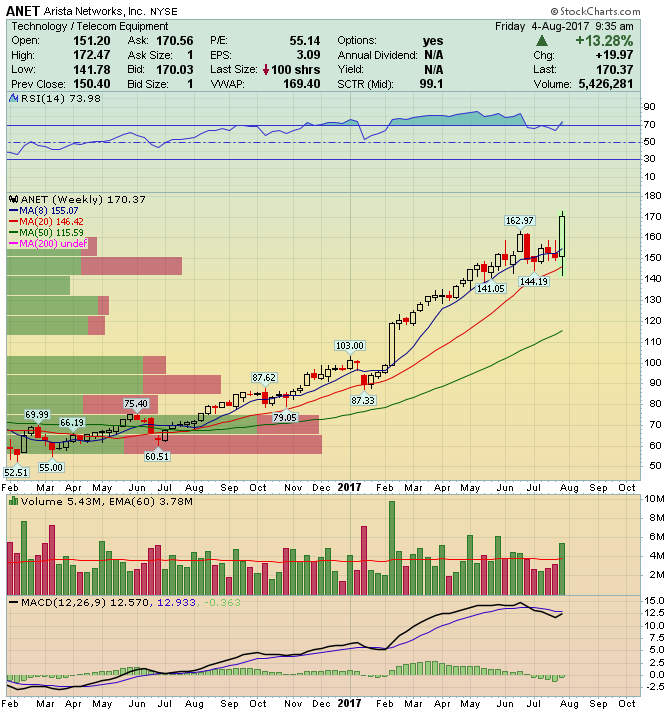