Around The Globe – Harvia Oyj (HARVIA.HE)

Headquartered in Muurame, Finland and trading on the OMX Helsinki, Harvia Oyj manufactures and distributes traditional, steam, and infrared saunas. After a comment was made in Monday’s JaguarLive session, I decided to take a closer look at this company. 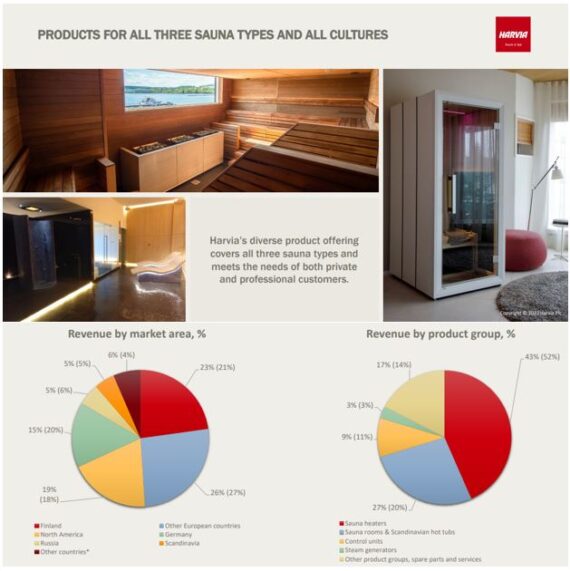 According to Harvia’s most recent financial review report, there are approximately 18 million saunas in the world. This large sauna base provides significant business arising from the replacement of saunas and sauna heaters. Historically, the sauna market has grown annually by an average of 5%. During the past few years, Harvia has seen considerable growth in the market due to growing awareness and appreciation of the health benefits related to sauna and the general trend of investing in and relaxing at home, which was also accelerated by the pandemic and home improvement boom. The so-called advance demand was driven by the increased demand for new saunas and equipment, and to lesser extent by the advance replacement demand.

This now brings me to the most recent results from the company in which in the same press release noted that consumer confidence has declined, and the most intense customer demand has turned from home improvement to other subjects with the lifting of the pandemic restrictions.

For the company’s April – June timeframe, revenue decreased by 1.7% to EUR 46M. Meanwhile, when looking at January – June, revenue increased by 12% to EUR 96.8M. CEO Tapio PajuHarju would say, “The unfavorable sales development was mainly driven by the market slowdown in Germany and adjacent markets. The main driver has been a slowdown at our major e-commerce clients who are very focused on the entry-level offering. At the same time, the premium market is solid and professional customers are coming back strong.” High inflation has left very few costs unaffected, and some basic raw material and especially logistics-related costs continued to beat previous record levels. The company has taken actions in addressing pricing, yet the entire impact will be visible during the 2H. 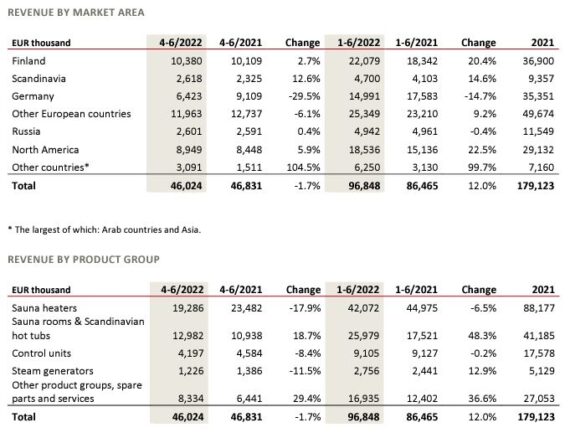 On the conference call, during the Q&A portion, electricity prices were discussed (for obvious reasons). “Electricity prices, quite high in many European countries. And future indicates, it will stay on a higher level. How that will affect demand in coming 6 to 12 months? Will sales in Germany stop?”

Management would respond, “I think if the energy prices will remain where they are, it will not stop the sales and still the cost of using the sauna usage is rather low. And on a family sauna, even if the price will be double of today’s market, when we talk about EUR 4, maximum EUR 5 per sauna session, when you divide that with the people who are enjoying the sauna, it’s less than a bottle of coke or glass or beer or whatever. So in that respect, it’s not in a way decisive. On the other hand, it may have an impact on some of the people who are having no savings and have been facing the increased fuel prices, increased cost of heating up the home and also increased grocery prices, though they may consider the sauna frequency.”

“And for the professional use, I think alternative heating methods will be considered. And I think more, I would say, smart energy use is coming into play. And for us, that usually means more expensive equipment, incremental features for the equipment, and that’s improving the business. On the Kusatek, we have a small division in Germany, where we sell gas-driven heaters. Those may suffer a bit with the existing gas prices.”

“But the ones who have access to biogas, they will continue operating normally. And the ones who don’t have access, they may need to convert into electricity and converting into electricity is also a good business for us. And we estimate none of this to be closed unless there is some kind of a governmental decision not to have the energy available for this. But then if that would happen, then many other things would also be restricted.”