Around The Globe – Spin Master (TOY.TO)

The company’s Toy segment, which makes up the bulk of revenue, came in at $351M, an increase of 37% Y/Y. Key product standouts included Gabby’s Dollhouse, DC Comics (Batman), and Wizarding World (Harry Potter). BMO Capital noted that despite Easter falling two weeks later than last year, the company commented that retail takeaway (POS) was up +3% in the U.S. in the quarter, better than the industry, which declined 5%. Global POS, meanwhile, increased +2% and also outpaced the industry, which declined 6%. Q2 POS is off to a strong start given the Easter shift, with management noting that it is running +40% higher Y/Y so far in the quarter. Similarly, the company’s Digital Games segment is showing no signs of slowing, growing revenues nearly 50% Y/Y.

Toys – CEO Max Rangel, in his prepared remarks, would share additional category highlights. Last year, they discussed the remarkable global performance of PAW Patrol, driven by the success of the award-winning PAW Patrol feature film. PAW Patrol is a massive franchise that continues to resonate with the preschool audience, maintaining its status as the #1 preschool property globally per NPD. Global POS for PAW Patrol was down 5% in the quarter, but in-line with the category trend and was affected by the timing of Easter. “The brand remains very strong. Demand for PAW Patrol remains robust, brand awareness, penetration and purchase intent are healthy, and we have exciting new themes planned for 2022. We are ramping up plans for our tenth anniversary of the franchise in 2023.”

Back in March, the company mentioned the very positive response it had been seeing to many of the new introductions in 2021 within Dolls & Interactive. “Viewership for Gabby’s Dollhouse continue to drive awareness and sales of the property as it enters its second year. It’s the sixth on the top show list in the U.S. for girls 2 to 5 years old and brand awareness continues to grow. The toys were a runaway hit in Q1, making it the #1 new toy property globally. The design team has done a fantastic job of bringing the magic of the show into homes with the Gabby’s Dollhouse Purrfect Playset, helping the item claim the #1 position in the play set figures and accessories class in the U.S.”

Lastly, within Wheels & Action, management said they achieved several key successes in the quarter, both with their internal innovation as well as with key licenses. “Most notably, our DC Universe line and specifically Batman toys launched in conjunction with The Batman movie, and that performed very strongly. Batman is now the #5 Spin Master brand in terms of POS. We’re excited for the future of the DC franchise with a blockbuster 18 months ahead, 4 new theatrical releases are planned. We are very excited to announce the renewal of the DC Comics license agreement with Warner Bros.”

Digital – CEO Max Rangel highlighted how this segment was led by Toca Life: World. Monthly active users for Toca Life: World grew to 61M at the end of Q1, nearly double the 33M last year at this time. The entire Toca Boca ecosystem now has over 78M monthly active users, up 50% compared to the 52 million in 2021 at this time. Active Sago subscribers were 309,000 this year compared to 286,000 in 2021. “The Sago Mini Friends initiative with Apple will also be beneficial to the Digital Games Creative Center. The launch of the show on Apple TV increases brand awareness for Sago Mini World and drives engagement, familiarity and attachment to the characters. Sago’s association with a powerful brand such as Apple increases credibility for all of Sago Mini’s digital games.”

BMO Capital analyst Gerrick Johnson stated that we are a year into Max Rangel’s CEO tenure and have been impressed with stewardship, performance, and execution. Spin Master has performed well in the face of difficult circumstances. The company has clearly fixed its supply chain issues, which had been a drag on performance well before the current global supply chain problems were even on investors’ radar screens. “TOY’s digital entertainment business continues to perform very well, and we anticipate positive investor reaction to new, more detailed segment disclosures. Over the longer term, we think TOY has some of the best long-term opportunities in our toy coverage to grow its business into new categories and geographies.”

Separately, Canaccord Genuity analyst Luke Hannan was out with a note on May 5th saying he came away from Spin Master’s Investor Day, held that afternoon, remaining optimistic on the company’s prospects for growth. Its next PAW Patrol movie, slated to be released in Fall 2023, will likely come with higher volumes of toy sales relative to its 2021 release, given the company was relatively cautious at the time considering the severity of the pandemic. Digital Games operating margins may fall at the lower end of the 35-40% range as the company invests in growth, but Spin Master has clear visibility on achieving a consistent 40% operating margin once its properties reach maturity. Lastly, Entertainment features a rich pipeline of content set to be released over the medium-term, which should serve as a catalyst to drive both Toy and Digital Games sales moving forward. 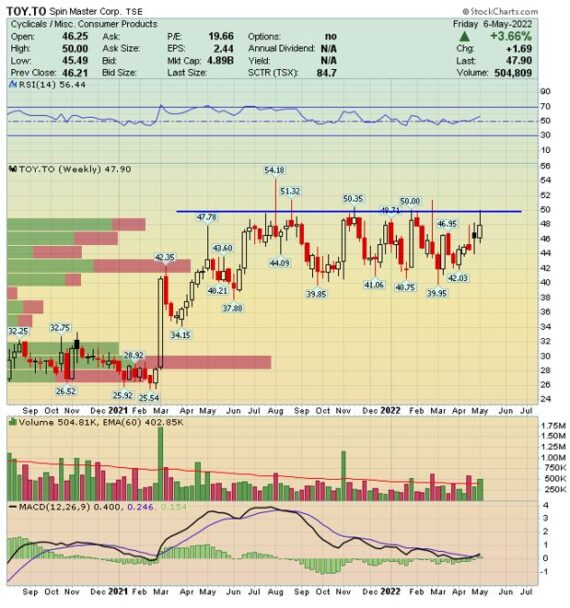