AudioCodes is a leading vendor of advanced voice networking and media processing solutions for the digital workplace. AudioCodes enables enterprises and service providers to build and operate all-IP voice networks for unified communications, contact centers, and hosted business services. AudioCodes offers a broad range of innovative products, solutions and services that are used by large multi-national enterprises and leading tier-1 operators around the world.

We last covered this name way back in October 2018 in a Behind The Numbers write-up.

Taking a look at JaguarScan, we will see that there were two small buyers of March-dated calls that remain in open interest:

Then, in yesterday’s trading session, we saw the following Bull Risk Reversal placed:

Moving along to the company’s Q3 earnings results from late-October, which represented its best quarter ever, it highlighted that it maintained and continued to create new partnerships with market vendors and market entrants such as with Microsoft (MSFT), Cisco (CSCO), BroadSoft, RingCentral (RNG), Zoom (ZM), Amazon (AMZN) and Dolby (DLB). Let’s take a closer look at two of them.

In the Q3 Q&A session, Needham’s Rich Valera wanted to dig into Microsoft a little bit. He would ask management if they could give everyone a sense of where they stand in terms Skype for Business, the Teams transition and how they see that business playing out over the next couple of quarters as maybe Teams catches up from a feature functionality standpoint to Skype for Business?

CEO Shabtai Adlersberg would respond, “So Microsoft is transitioning their unified communication and collaboration solution from Skype for Business, which is an on-prem solution and was the key deployments and implementation in previous years. As they’re moving to a UC as a Service solution, named Teams, and basically, that transition is now taking place about mid-2019 and is growing and growing pace going forward. One thing that we’ve seen lately is that because of the success of the web conferencing application in the market, where there were new players growing, such as Zoom Video Communication and others, major focus in partner activity went from overall Teams to Meeting First or Video First, and as such, some of the development for Teams’ voice were pushed a bit.”

“So what we are experiencing in 2019 is basically a delay in completion of features, which are needed to provide a full comprehensive Teams’ voice capability. On the other hand, I can tell you, and as I’ve already reported earlier in the call that we’ve started to see phones, IP phones. With Teams starting to grow, we see more interest and deployment by more customers, and that trend is evident also early this quarter. So we believe that and based on what we hear from our partners is that we should see Teams’ voice coming into full gear, somewhere in the first half of 2020.”

Following the Needham Growth Conference, Mr. Adlersberg would again highlight the expectation of increased revenue growth from Microsoft in 2020 as Skype for Business (SfB) transitions to Teams and Teams continues to gain momentum.

On the Q3 call, management would tell investors that only a few weeks ago, it announced investments and entry into a new space for them, namely the meeting room and technologies markets. In early October, it announced entry into this market in collaboration with Dolby.

“Our Room Experience Solution suite are designed to address a wide range of customer room environments from other rooms to large rooms and board rooms. The solution includes a comprehensive portfolio of devices built around Dolby hardware and audio technology in order to deliver an exceptional audio experience in these rooms, rooms of all sizes. The initiative includes also Meeting Insights enterprise software solution, designed to easily capture, organize, share and distribute enterprise meeting contents using AudioCodes state of the art voice.ai technology.”

At the Needham Growth Conference, management would highlight this opportunity again with a spotlight on its Room Experience (RX) products, which relies on hardware from the partnership with Dolby. Needham analyst Rich Valera would say this vertical presents an additional growth vector for the company.

Finally, one last item to point out is that back on November 25th, the company announced a royalty buyout agreement with the Israel National Authority for Technology and Innovation, settling its $49M debt in full for approximately $32.2M. This agreement eliminates the company’s future royalty obligations related to anticipated revenue as well as interest payments related to debt, resulting in an improved outlook for Gross Margins and NG EPS beginning in 2020. Needham, in a note, would highlight that following a one-time GAAP charge to be taken in 4Q19, “AUDC is expected to see a roughly 150bps improvement in ongoing GM, which we have reflected in our updated/ increased 2020 NG EPS forecast. As such, we maintain our Buy rating while increasing our PT to $26.” 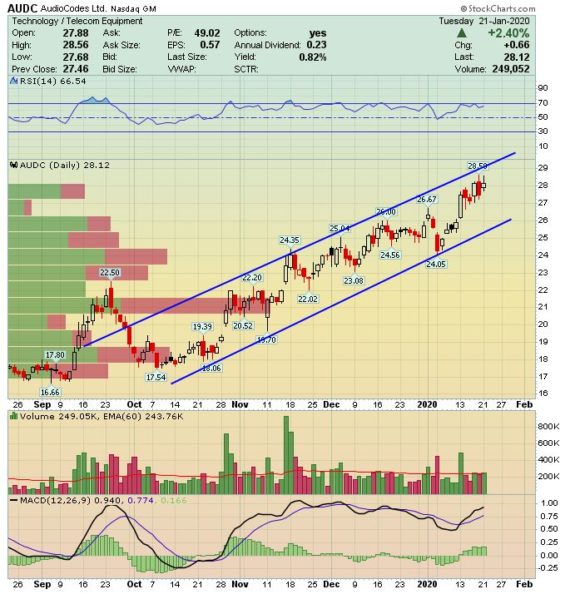