Last covered on the Home Page on August 18th (See HERE), Aehr Test Systems (AEHR) reported their Q1 earnings after the close yesterday with the stock being rewarded handsomely today, currently up 20%.

Net sales for the company’s Q1 came in at $10.7M, which was down 47% sequentially from their record sales of $20.3M in the fourth quarter and up 89% Y/Y. This sequential deceleration shouldn’t come as a surprise because management has acknowledged the fact that the first quarter over the last couple of years tends to be the weakest. If you want specifics, management said the sequential deceleration was due to a decrease in WaferPak, DiePak revenues of $8.7M. “Customers often buy systems and then WaferPaks later, after they’ve completed their WaferPak designs. While our lead customers ordered several systems recently, we have yet to receive all the WaferPak orders to match up with these systems. We expect to receive these WaferPak orders later this year.” Looking ahead, management is forecasting significant growth in the upcoming quarters.

In fact, the company would reiterate their previously provided guidance for total revenue of at least $60M to $70M, representing growth of at least 18% to 38% Y/Y, with strong profit margin similar to last year. They continue to expect bookings to grow faster than revenues in fiscal 2023, as the ramp in demand for silicon carbide and electric vehicles increases.

Regarding inventories, they came in at $17.2M in Q1, which was an increase of $2.2M from the preceding quarter and $7.1M from last year. “As we’ve noted before, we have been ordering long lead components for systems and WaferPaks to ensure adequate supply to meet customer lead times and to support our expected growth in fiscal 2023.”

CEO Gayn Erickson would spend the majority of his time on the conference call discussing the progress being made with its customers. Here are a number of bullet points that best summarize the discussion:

–The company is currently engaged or in discussions with almost all of the existing and future silicon carbide suppliers now regarding its unique low cost multi-wafer level test and burn-in solution that enables contact to and test of 100% of devices.

–The company’s lead customer for silicon carbide wafer level burn-in continues to ramp up use of their FOX-XP multi-wafer systems and WaferPaks, placing yet another significant order during the quarter. Similar to past orders, they purchased the systems without the necessary WaferPaks for wafer contactors and as such, AEHR expects significant orders from them for WaferPaks to match these systems.

–Beyond this lead customer, they said there are two additional major silicon carbide semiconductor suppliers continuing to move forward. Following the end of the quarter, they announced an initial purchase order from one of these suppliers for their FOX-NP multi-wafer test and burn-in system, multiple WaferPak contactors, and a FOX WaferPak Aligner.

Finally, it’s worth pointing out that yesterday, Needham analyst Raj Gill would issue an industry note titled, “Diving Into the Silicon Carbide (“Sic”) Revolution.” His major points would include that amidst a global economy struggling between rate hikes and inflation, they are certain that semiconductor content in automotive applications continues to grow. Within that story, silicon carbide and wideband gap technologies claim important chapters.

“These materials have the potential to revolutionize multiple markets. In our view, any conversation surrounding electrification should include a basic knowledge of silicon carbide.”

“The Silicon Carbide device market currently accounts for approximately $2B in sales today, growing at a 35% CAGR through 2026. Two megatrends are driving that rampant growth: Electric Vehicles (EVs) and Charging Infrastructure. Silicon carbide as a next-gen material offers benefits to traditional silicon that outweigh its (current) cost premium. Simply, SiC devices are smaller, faster, and can get much hotter; all necessary upgrades when discussing multi-industry renovations.” 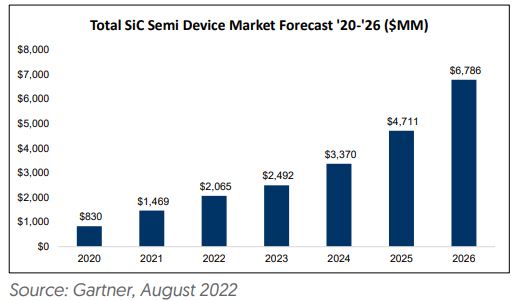 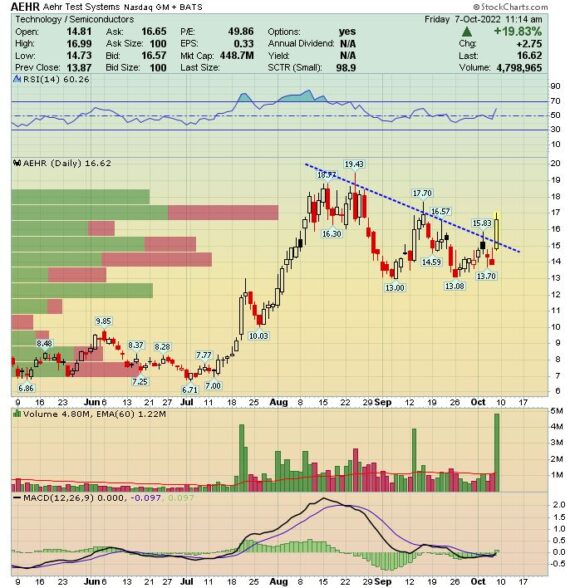