Behind The Numbers – Century Casinos (CNTY)

**This Behind The Numbers write-up is one of a handful in tomorrow’s Weekend Research report, sent to Jaguar clients every Sunday.

Century Casinos (CNTY) develops and operators gaming establishments, as well as related lodging, restaurant, horse racing, and entertainment facilities. Fahad brought this stock up on October 16th after Roth Capital said this could be the “Next Big Gaming Stock.” On Friday morning, the company reported its Q3 earnings:

Co-CEO Peter Hoetzinger commented that the strong trends they saw in June and July continued throughout the third quarter, increased spend per visit, more time spent on device, plus increased return of the core customer. “With somewhat reduced capacity on our casino floors and limited amenities for our guest overall visitation to our properties was down compared to last year. But we quickly rebalanced our operating and marketing approach without comprising a great customer experience. Being selective with our amenities, keeping strong controls on the promotional environment and staying focused on the high margin areas of our business brings expense reductions and new efficiencies resulting in significantly higher operating margins, while we currently see the positive currents continuing.”

Management also mentioned that Q3 was the first full quarter including the results of the three properties they acquired from Eldorado in December of last year. When they closed that transaction, the company said it was a truly transformational deal and can now demonstrate that with hard facts. Net revenue almost doubled, EBITDA more than tripled, and it’s become a clear U.S. focused operation with 79% of total EBITDA coming from the U.S., 17% from Canada and 4% from Europe. Now, turning to specific segments:

Colorado – Regarding their properties in Cripple Creek and Central City, net operating revenue was up 13% and adjusted EBITDA more than doubled. EBITDA margin jumped from 25% to 46%. During the quarter, they also announced their third sports betting partnership deal with Tipico.

Missouri – Moving onto Missouri, which, according to management is “Our most important market in terms of EBITDA and cash flow generation.” At their two properties in Cape Girardeau and Caruthersville, about 95% of all slot machines and approximately 53% of all table games positions are available for play and the results for the quarter were fantastic. Compared to Q3 of last year, when the casinos were under different ownership, they’ve managed to grow net operating revenue by 4% and adjusted EBITDA by 33%, with increased EBITDA margin from 32% to 41%.

“Our Missouri properties have done a great job in focusing on serving the best customers in an environment of reduced operating expenses in highly target marketing. As a consequence, the primary driver for this great results was increase in average bet per player of approximately 16%. Additionally, handle pulls per hour had increased. Guest appeared to be playing slightly faster and betting more, which is driving the increase in revenue per player. Furthermore, the slight decline in admissions has primarily come from lower end players. High end players remained strong since the properties reopened.”

West Virginia – Here, the company re-opened their Mountaineer Casino, Racetrack and Resort in early June. Currently, the gaming floor offers 86% of the slot machines and about 39% of the table games positions for play. Some of the food and beverage outlets have reopened with limited hours of operation. However, the convention space remains closed and the hotel is operating with limited rooms available. EBITDA, as a result, was down 11%.

Canada – The company has operations both Edmonton, Calgary and gaming floors are currently operating approximately 60% of the total gaming machines, while hours of operation are limited. There are restrictions on spectators at the racetracks and the hotel and showroom in Edmonton remain closed. Table games, according to management, are traditionally quite an important part of the business due to the Asian population. “We were only allowed to reopen on September 7, so no strong contribution in the quarter at all.” EBITDA was down 10% at its Edmonton properties and down 5% at the Calgary operations.

This past week, Amendment 77 in Colorado was approved:

In the Q&A session, Macquarie analyst Chad Beynon asked management how we should think about this new opportunity?

Co-CEO Erwin Haitzmann responded, “Yes, the timing I think some time in end of Q1, early Q2 and with regard to the quantitative effect. It will be difficult to project but what I can say is that, in both our properties in Cripple Creek and in Central City. We have a number very nice hotel rooms, they are certainly competitive. So we have the tools to entertain. Well we think it’s good to offer adequate hotel rooms to players that want to play higher volumes.”

Finally, regarding M&A, management highlighted that they have sold their casino operations in Calgary a couple of months ago but they still own the real estate. “But as you can imagine that’s not really our intent to hold it for a very long time, so we will intend to sell that real estate in Calgary.” And then the European operations, which make up 4% of total EBITDA, management said you can assume that we are thinking of trying to get a good deal for these assets in Poland.

And then on the acquisition front, yes absolutely, management sees quite a lot of very interesting opportunities in the U.S. “The regional players have become very, very big and naturally they are somewhat less interested in some of the properties that would be very important for us. We’ve now shown that we can successfully negotiate contract, close and then integrate a large transaction. And so I think that makes us a good buyer for some more of these mid-size assets and so yes, we are out looking already, so I think next year will be a very, very busy M&A situation in the U.S.”

This topic was recently covered by Roth Capital in their note on October 16th: 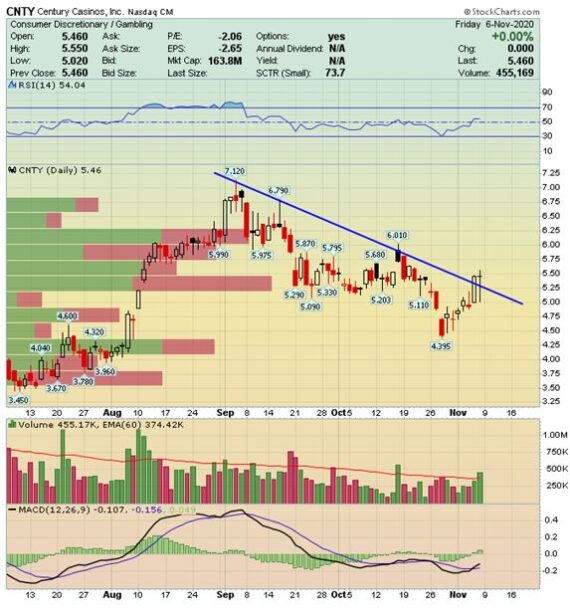