Behind The Numbers – Cintas (CTAS)

Cintas is a provider of uniforms, supplies, and services to businesses across the United States. Its product lines include uniform rentals and sales, dust mats, washroom products and chemical dispensers, shop towels, aprons, safety supplies and services, and document shredding. 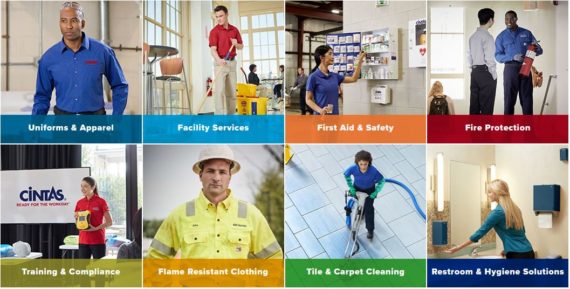 Shares are currently higher today by 7% after reporting Q4 earnings after the close yesterday:

On the Q4 conference call BAML analyst Gary Bisbee would ask, “And then on SAP, a two-parter, you’ve said you’re 65% of the way through the network rollout at this point, you’ve talked about two benefits, the one you’re most excited about is just the information allowing you to cross sell and run the business better. How is that playing out, once you’ve got one of your facilities that is up and running, is that pretty quick or is there a meaningful learning curve? And I guess what I’m really trying to get at is, are you beginning to benefit yet from the rollout to date, or should we think of it more as a future benefit, later this year, maybe even more so into next year.”

CFO Mike Hansen would respond by saying, “Sure. There is a learning curve. No question about it. This is a system that is heavily data dependent and we have to change our business processes locally to be able to use that system most efficiently. So, there is a drag in terms of, we talked about an eight-month planning process prior to implementation, there’s also a period of time afterwards where we’re getting efficient at using the system. So it certainly is a process and a lot of change going on.”

“From a local perspective, I think we are seeing some incremental benefits like new portable route computers for our SSRs and so there are some incremental benefits that are probably more on the minor side. I think from the ability to manage the information, we would typically do that at greater than a one location at a time type of a look. And so the more we get on, the more we can begin to look at different regional groupings and take advantage of the power of that information. So I think most of that is going to come as we move into ‘21 and ‘22.”

Barclays, in the Q&A session, would attempt to get an update on the G&K Services synergies in terms of where they were exiting 2019, what they expect in 2020, and how they are feeling about potential sources of upside going forward.

CFO Mike Hansen would say that they finished fiscal ‘19 a little bit over $100M for the year, a little bit better than they expected at the beginning of the year. And I would expect that in fiscal ’20, we’ll get to the neighborhood of $135M, which is right in the middle of the range that they guided to years ago when the initial deal was announced. “If we can get to that 135 in fiscal ’20, that’s a year ahead of schedule, we had talked about a four year plan, and so we feel really good about achieving that. The lifting, the heavy lifting that’s left continues to be the route optimization that will continue in fiscal ‘20. That’s, as we’ve talked about over the last few years, that’s not a source of significant synergies. We will get some energy benefits as we eliminate mileage on our routes, but we certainly are growing and need to continue to add capacity on route.”

JPMorgan – Analyst Andrew Steinerman raised his price target last night to $275 from $235 noting that the environment for the uniform rental industry remains conducive for both secular penetration and pricing lifts, and CTAS is benefiting from G&K cost and revenue synergies even as the SAP implementation continues to progress seamlessly.

The analyst would add that Cintas’ core route-based business remains healthy and could likely weather a recessionary drag better than many investors perceive. “We believe the company’s product and service line diversification as well as balance sheet flexibility would enable the company to continue growing organically during a typical recession. Over the next couple of years, revenues will be bolstered by still-nascent cross sale into legacy uniform-centric G&K customers as well as by the enhanced sales visibility provided by SAP implementation. Some investors are enthusiastic about the margin opportunity from the company’s new system, yet we sense even more excitement from the company around leveraging customer data to drive new business.”

RBC Capital – Analyst Seth Weber raised his price target to $267 from $258 this morning highlighting that Cintas indicated the business environment remains good, with mid-90% retention. For FY20, it sees healthy core organic uniform revenue growth complemented by HSD/LDD gains in Fire and First Aid & Safety categories. EPS should outpace revenues, including more progress with G&K integration, with anticipated FY20 synergy of approximately $135M (1 year ahead of schedule) up ~$30M Y/Y (which exceeded $90M – 95M guide) with additional upside potential from sourcing and cross-selling. Further out, ongoing ERP implementation should be another tailwind. 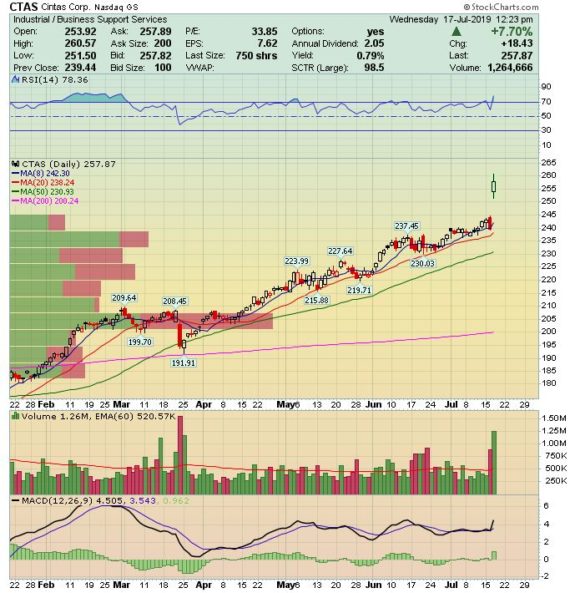