Behind The Numbers – FirstCash (FCFS)

FirstCash (FCFS) is the leading international operator of pawn stores with more than 2,700 retail pawn locations and approximately 19,000 employees in 24 U.S. states, the District of Columbia and four countries in Latin America including Mexico, Guatemala, El Salvador and Colombia.

Last week, on July 22nd, the company reported its Q2 earnings which saw shares rise by nearly 4%. However, the move was short-lived as the stock recently broke below a key support level. Here were some of the key takeaways:

In their press release, management said that with the onset of COVID-19 related lock-downs of the economy and the rapid federal stimulus response, pawn loan originations in the U.S. fell significantly in April, declining almost 60% for the month. Beginning in May, pawn loan originations began to slowly improve but were still down 30% to 35% in early July. Resulting pawn balances at June 30 were down 40% in total and on a same-store basis compared to the prior year.

Meanwhile, U.S. retail sales and margins in the second quarter were especially strong and fully offset the impact from the decline in domestic pawn fee revenue. Total retail sales increased 24%, while same-store retail sales increased a record 24%. “The company’s ability to keep its stores open during the quarter as an essential business and offer popular stay-at-home products such as laptops, tablets, monitors, gaming systems and sporting goods drove the strong retail sales demand.”

Turning to Mexico, excluding short-term closings due to regulatory decree or safety protocols, stores in the country were generally open most of the quarter. However, retail sales in all stores were completely prohibited by regulators during the last three weeks of May. Total revenues declined 27% in the second quarter, reflecting the temporary store closings, retail restrictions and other impacts of COVID-19, including weaker foreign currencies.

Wedbush analyst Henry Coffey would downgrade the stock on July 24th to Neutral from Outperform. The analyst said the headwinds tied to economic stagnation in Southeastern states of major significance to the company due to the effects of rising cases of COVID-19 are persisting, and the analyst is reasonably confident that Congress will extend the current CARES Act supplemental payments.

JMP Securities analyst David Scharf was out with a note following their discussion with management noting the following:

-The depressed inventory levels at the end of June, despite the company increasing its “buy rates,” should lead to sequential and Y/Y declines in retail sales in Q3 and a Y/Y decline in Q4.

-While the company will continue to evaluate expense rationalization amid the pandemic and recession, we do not see the ability to deliver EBITDA margins in 2H20 that are consistent with 2Q levels given the anticipated fall-off in revenue.

While JMP Securities believes that pawn lending is among the most resilient and least volatile consumer finance model to invest in, with effectively no credit risk (there is collateral risk), they remain neutral on FCFS shares based on three factors:

1. The build-up in household liquidity in the U.S. and Mexico from several sources (e.g., federal stimulus, reduced spending, U.S. to Mexico remittance volumes) is negatively impacting the near-term growth outlook for pawn lenders more than most other consumer finance models.

2. We believe that the “law of large numbers” for units in Mexico is such that delivering normalized and sustained double-digit, same-store growth is going to be very challenging once we emerge from this recession.

3. We believe a mature U.S. business, combined with what looks to be a maturing Mexican business, may not warrant the “growth multiple” that the stock has historically enjoyed. 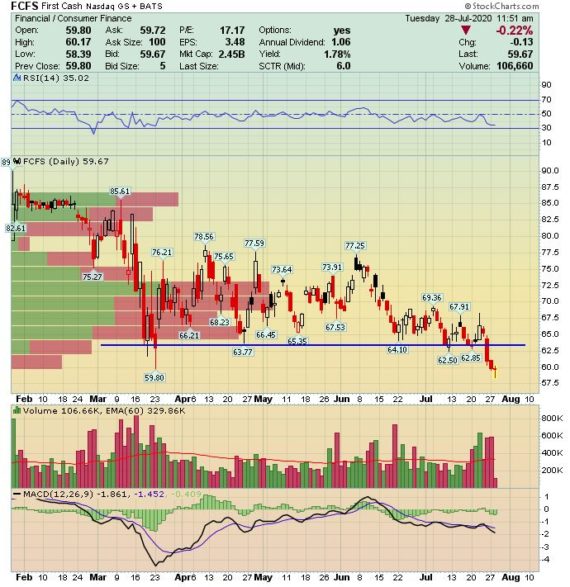