Behind The Numbers – Freshpet (FRPT)

This manufacturer of fresh, refrigerated food and treats for dogs and cats is lower today by 10% after reporting Q2 results after the bell yesterday:

Regarding today’s weakness, management would highlight on the conference call, “We also experienced some quality issues on inbound raw materials that resulted in both short shipments on a few specific SKUs and higher scrapping costs related to product that did not meet our quality standards. Plus, we incurred incremental processing costs and other products that in total deferred our adjusted gross margin in the quarter by approximately 170 basis points and resulted in constrained supply late in the quarter.”

“That constrained supply resulted in higher out of stocks with our customers for a few weeks in late June and part of July. While some of the higher costs we experienced flowed into July and thus impact a portion of Q3, we believe we resolved the issues and do not expect them to impact our ability to achieve our target of a 50% adjusted gross margin for the year and a 51% adjusted gross margin at the end of Q4.”

Credit Suisse, in a post-earnings note, would say that even though this issue will spill over modestly into 3Q, the company raised guidance for the year by $1M. In their view, the guidance increase demonstrates management’s confidence that the out of stocks did not cause any loss of business and that the business has plenty of leverage for its fixed costs. They continue to be impressed by the ramp in household penetration and the good balance between distribution and velocity gains in the quarter.

Meanwhile, here were some other positive comments from CEO Bill Cyr:

-The company’s core dog business, which is the sum of dog rolls, roasted meals and Fresh From the Kitchen main meal items that accounts for more than 90% of our business, was up 28% in the quarter.

-Its small but rapidly growing e-commerce business, which includes Curbside programs with key customers, home delivery via services like Instacart and Shipt and fresh e-commerce like AmazonFresh and FreshDirect was up 101% for the quarter.

-The strong first quarter momentum with retailers continued into the second quarter, driving the largest increase in ACV distribution. It added 361 net new stores in Q2, bringing their year-to-date increase to 915 net new stores and total store count to 20,414.

-It upgraded another 160 stores from small or medium fridges to large fridges in the quarter, bringing their total upgrades year-to-date to 363, and it added a second fridge to another 376 stores, bringing the total number of stores with two or more fridges to 747 stores.

-Discussed its second advertising campaign, which began airing at the end of May and has driven very strong interest in Freshpet. They continue to expect to get a return for this investment in the second half of the year, as they have experienced historically.

In a Stifel note this morning, analyst Mark Astrachan would remind investors of the long-term sales runway via IRI scanner data:

“Freshpet’s growth in scanner data tracked channels, which represent approximately 80% of total sales, has accelerated, with approximately 31% growth, +90bps sequentially, in the 2-year CAGR in the most recent 4-week period, excluding the discontinued baked product. Sales growth has largely been driven by velocity gains, with growth for dollar per store selling in tracked channels increasing 16%, or a 140bps sequential acceleration on a two-year basis, as well as volume gains due to new store expansion +27%, or an 80bps sequential acceleration on a two-year basis. Freshpet expanded to 82 and 221 new stores in two most recent 4-week periods, ended June 30th and June 2nd, respectively suggesting strong demand for its products continues, particularly in new markets.”

Finally, as far as untracked channels, Stifel said that management noted Freshpet growth in Big Box Pet Specialty (~15% of the ~19% of sales in untracked channels), grew 13% in 2Q19. They expect this to continue due to Freshpet’s unique position in the higher-end natural dog food space. In addition, Stifel sees significant potential in untracked Club stores. 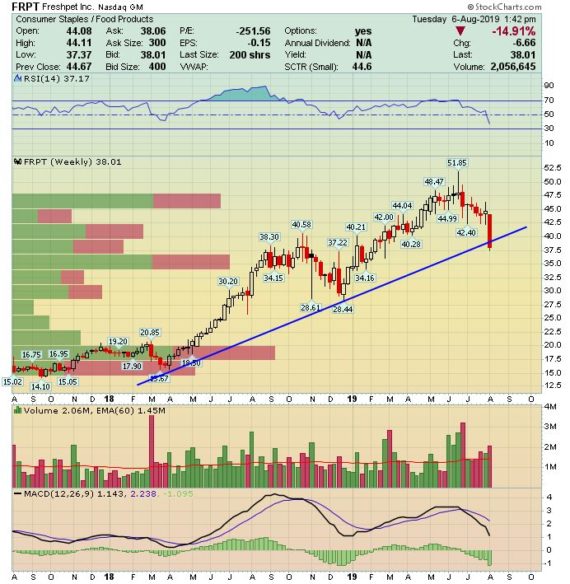