Behind The Numbers – Interactive Brokers (IBKR)

After the close yesterday, the company reported its Q3 numbers:

Management said they once again saw strong growth in accounts and client equity. The average VIX Volatility Index rose to 15.9 versus a low volatility quarter last year. This increase combined with having more clients on the platform helped lead them to a 13% increase in total DARTs.

However, management indicated it saw weaker commissions outside the Americas, as some markets fell including the Nikkei, Hang Seng and FTSE 100 indices.

Nancy Stuebe, Director of IR, would add, “We look forward to a resolution of trade issues in Asia, but we have not yet seen much change in the ability of Mainland China accounts to fund as they had in the past. However, we are more diversified in terms of the countries and companies we provide our I broker services to and are seeing growth worldwide in every region where we operate.”

In addition to IBKR Lite (more on this later), the company said it undertook a number of initiatives and expanded their range of offerings this quarter. “This quarter saw the introduction of new portals for introducing broker and employee to our clients, and significant new improvements to the RAA platform. All these features not only offer robust functionality, but have also benefited from major improvements in navigation, workflow and design. Our bond desk added a direct connection to market access an alternative trading system that can be accessed on our trader workstation.”

Meanwhile, back on June 30th, it announced their new bet, learn, win simulated sports betting exchange which operates as a P2P market where participants can buy, sell and trade bets on actual sporting events in real time. Players get $1,000 in virtual dollars, euros, pounds or Canadian dollars and use it to buy or sell simulated sports bets. Winnings can be converted to up to $1,000 in free commissions once a participant has opened an Interactive Brokers account. On the conference call, management stated, “While it is too soon to talk about impacts, we are seeing conversions from the simulated sports betting accounts to actual funded IBKR accounts, which was our objective with this promotion.”

As a quick reminder, back on September 26th, IBKR announced IBKR Lite, a new offering that will provide commission-free, unlimited trades on U.S. exchange-listed stocks and Exchange Traded Funds.

Outgoing CEO Thomas Peterffy would say that IBKR Lite came online a couple days ago so there isn’t much to go off of yet. As of right now, they have 35 new IBKR Lite accounts and the average assets in accounts are $52,000 and on the average day hold $24,000 of debt in cash.

However, he would add that they did not expect such a swift reaction to other companies, such as Charles Schwab (SCHW) and Fidelity lowering their commissions to $0.

Sandler O’Neill analyst Rich Repetto would ask in the Q&A session if they there contemplating any changes to IBKR Pro going forward given what the industry has done?

CEO Thomas Peterffy would respond, “No, we’re not contemplating any changes to Pro. I think that most of our Pro customers are sophisticated. Some who are not may go over to Lite and that is completely okay with us. Pro customers understand that they benefit from the favorable difference on interest on cash balances and lower interest on margin borrowings. And some of these very sophisticated customers also understand that their orders would not be welcome by the high frequency traders. So, they don’t have much of a choice anyway.”

Finally, Wells Fargo analyst Chris Harris would bring up the renewed chatter that has apparently been circulating about the potential for industry consolidation and if they were entertain any kind of an acquisition or merger?

Thomas Peterffy would respond, “Culturally, we are used to growing our own business. And I think we’re better at that than trying to digest another operation. And right now, it’s would be especially complicated because, it’s very hard to tell what these different operations would look like. So I don’t think that we would be actively looking at E*Trade that’s probably what you have in mind. So, no, we would not.” 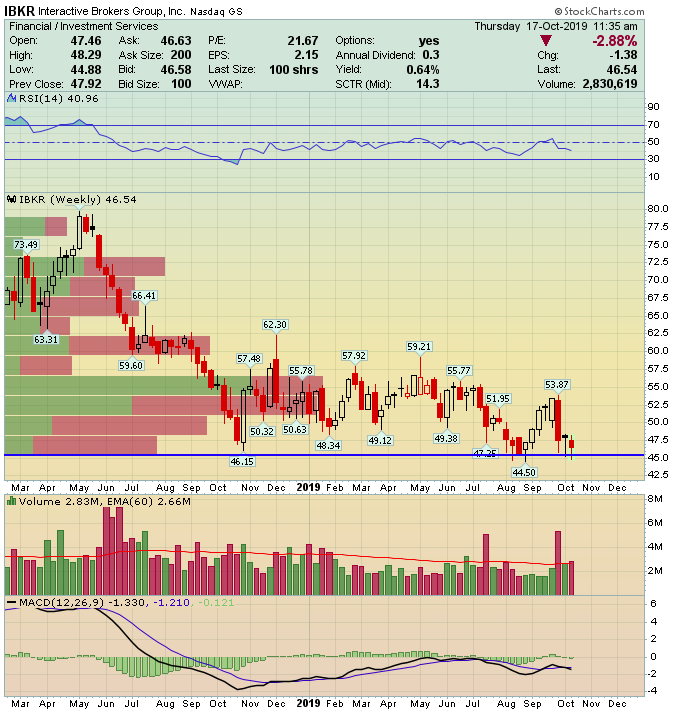