Behind The Numbers – Intuitive Surgical (ISRG)

After the close yesterday, Intuitive Surgical (ISRG) reported its Q2 earnings that beat on both the top and bottom line. For any newcomers, each morning in our First Read note, a quick earnings overview is displayed for each company that has reported. Below, you will find the snapshot related to ISRG:

Besides this snapshot, what else did we learn from the Q2 report:

-Outside U.S. procedure volume growth was up 51% from last year and 23% sequentially.

-From a geographic standpoint, management stated U.S. procedure volume recovery trends were largely stable throughout the quarter. In Asia, China continued to see robust procedure growth in part driven by a now larger installed robotic base. In Europe, management emphasized a strong recovery in the U.K.

-Showing their confidence, the company raised its Procedure Growth Guidance to 27% – 30% from 22% – 26%, with the high end of the range assuming strength in U.S. general surgery.

BofA analyst Bob Hopkins would note that ISRG’s procedure growth in Q2 was 34% above 2019 levels with a two year compound annual growth rate of close to 17%. “No other large cap medical device company is likely to put up Q2 growth rates remotely close to these levels in our view. The global recovery in procedure volumes is partly responsible for this recovery but in our view the main driver has been a clear acceleration in the conversion to robotic surgery since the pandemic began.”

Lastly, JPMorgan analyst Tycho Peterson did point out in their post-earnings note that during the last several weeks, there have been three separate class action lawsuits brought against the company from customers accusing ISRG of forcing them into signing restrictive contracts that prohibit using third party sources for service and repair, allowing ISRG to sell replacement parts and service at inflated prices. While the company did not formally address the litigation on the call (nor did it come up in Q&A), in their follow-up, management characterized many of the claims made by the plaintiffs as “falsehoods” (particularly one claim that ISRG remotely shut down one of its systems mid-procedure) and stated that the company looks forward to sharing its response in court, with the website recently updated to reflect the company views.

In his prepared remarks on the conference call, CEO Gary Guthart said, “Examining procedure trends more deeply, in the United States, procedure growth was strong in the quarter, driven by growth in bariatric surgery, hernia repair, and cholecystectomy.”

Stifel analyst Rick Wise, last week, was out with a note after having in-depth discussions with bariatric surgeons to better understand this opportunity for the company.

First off, bariatrics is labeled as a subset of general surgery and involves surgical weight loss procedures which include gastric bypass, sleeve gastrectomy, lap band, duodenal switch and revision procedures. Based on data from The American Society for Metabolic and Bariatric Surgery (ASMBS), annual U.S. bariatric surgery procedures have grown to over 250K+. 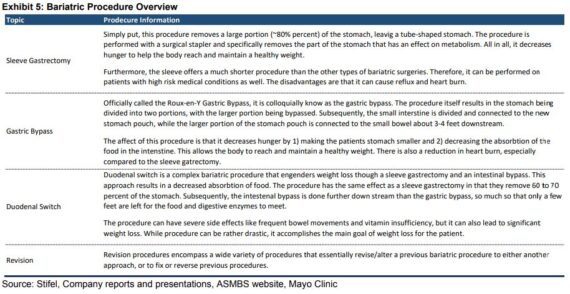 Of these 250K annual US bariatric procedures, Stifel believes only 10% are currently performed robotically with an Intuitive Surgical da Vinci robot. This would imply bariatrics represents roughly 2% of total ISRG annual procedures today. “Our physician due diligence group strongly argued that robotic bariatric utilization and penetration will likely increase in the years ahead.” COVID has actually been a near-term tailwind for the market as clinicians noted that they have particularly seen an increase in overall patient weight gain and overall number of bariatric cases. These physicians believe that the general population being more sedentary during COVID quarantine has resulted in increased weight gain and that patients are now seeking weight loss options as life returns to more normalcy. In this case, robotic bariatrics could benefit from both more overall bariatric cases and heavier average patient cases.

Also, across all of Stifel’s conversations, the physicians made clear that there has been an ongoing shift in bariatric procedural approach that is now headed to more complex, difficult procedures. Similar to larger, more difficult to treat patients, the surgeons agree that robotics offers more clear-cut benefit and is more advantageous, in more complex cases. And when asked about competitive robotic platforms for bariatrics, like Medtronic’s (MDT) Hugo and Johnson & Johnson’s (JNJ) Ottava, the surgeons sounded optimistic about the potential other robotic platforms could bring, though generally agreed other systems are still far away from treating bariatric patients. More broadly, “these physicians seemed to agree that Intuitive has established a large competitive moat with their large installed base and that it would be difficult for competitors to enter current ISRG accounts.” 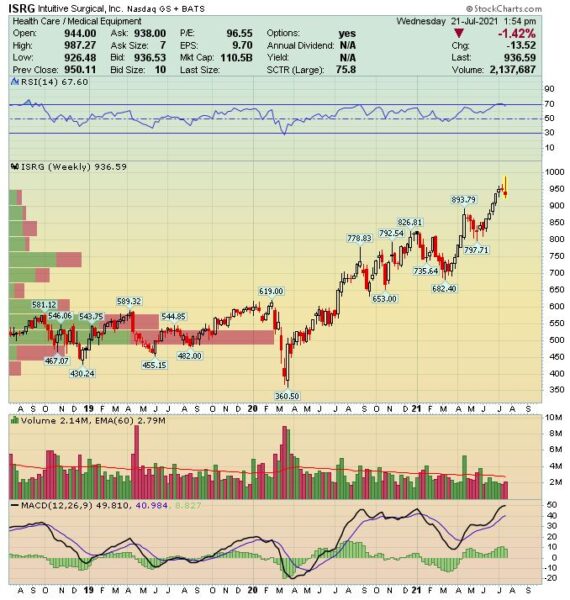