Behind The Numbers – JAKKS Pacific (JAKK)

Back on May 8th in our weekly Consumer Callouts note to clients, I profiled shares of toymaker JAKKS Pacific (JAKK) where the discussion surrounded potential catalysts/growth drivers. For example, the company holds the license for Disney Princess baby dolls, dress-up, and role play. BMO Capital believed that JAKK’s Disney Princess dolls could get a boost from Mattel (MAT) taking over the fashion doll and playset license from Hasbro (HAS) in 2023. They believe that Mattel will reinvigorate the entire Disney Princess toy franchise with new innovation and designs which in turn will drive traffic to the Disney Princess aisle or web pages where JAKK’s product could see a “halo benefit.”

Meanwhile, on the theatrical side of the business, JAKKS has some strong licensed entertainment-driven products including the master toy license for Walt Disney’s (DIS) Encanto. Despite the movie jumping to the Disney+ streaming platform after only 30 days, it has still generated over $250M in worldwide box office receipts. Being a late November movie with little pre-release buildup, the Encanto toy line started off slow last year with very small programs at retail. BMO Capital said they anticipated retail support growing through 2022, with contribution to JAKK being much larger this year than it was in 2021.

This now brings me to the company’s Q2 earnings release from Wednesday after the close. How was it received? Shares finished higher today by 31.5%. CEO Stephen Berman would even begin the conference call by saying, “It’s not often you get to report quarterly year-over-year sales growth of 96%, so you can hopefully forgive our enthusiasm around our latest results.” Let’s review the numbers.

Dolls/Role Play – Regarding this segment, the company stated that as a result of ongoing Y/Y growth they have been securing extended shelf’s presence and incremental distribution for the Disney Princess franchises, generating meaningful incremental volume. That placement has been well earned and is delivering for their customers with solid sell-throughs.

The Disney Style Collection line which continues to bring new items to market continues to perform well as early releases in the segment have. Later this fall, JAKKS is building on their popular 15-inch large doll range with a talking and singing feature doll segment. Their launch of assortment includes Ariel, Moana and Tiana, among others, from the Disney Princess franchise and from the Frozen franchise versions of Elsa from Frozen 1 and Frozen 2. Although nearly 3 years removed from the most recent film, Elsa remains one of the most popular Disney characters, per management. And while as anticipated, Frozen sales are down versus last year, they have been selling above planned expectations.

Management would then say that when it comes to Disney’s Encanto, they have been scrambling since January to keep up with demand and make sure that this will be a magical holiday season when it comes to Encanto toys. The Magical Madrigal House has been the hot hard-to-find toy and they’re on track to ship nearly 0.5 million units. “Our largest customers are planning meaningful out-of-aisle real estate in Q3 and Q4 as much anticipated Encanto inventory makes its way to retail shelves.”

Costumes – Regarding this segment, management would say that building on last Halloween success and sell-through, they saw most customers this year wanting to both go a bit deeper. A return of confidence in the box office created additional demand as their 2022 offering was anchored by theatrical releases like Jurassic World, Minions, Disney Pixar’s Lightyear in addition to Disney’s Encanto and Sonic 2. “I’m also happy to say that our first quarter of shipping the Disney business in Europe is going extremely well and we are having a lot of great discussions with new customers and distributors as we expand our network there.”

BMO Capital, in their post-earnings note, said that while JAKK doesn’t provide guidance, management commented that its FY22 expectations are now higher than they were after Q1, noting “exceptional consumer demand and sales momentum of its products.”

Other Points of Interest

Regarding Spending Intentions…management commented how they’ve been extremely focused over the years to try to ensure a large portion of their product SKU retail price points are lower than $30. “We are proud that over half of our revenue comes from items that traditionally retail for $25 or less. And when you move that threshold to under $50, you’re closing in on 90% of our sales. That reality of affordable price points in combination with the current popularity of our classic and topical brands leaves us mindful of the current market conditions, yet optimistic that we will finish the year with the right kind of momentum heading into 2023.”

Regarding Inventory…management said their quarter end inventory level is $124M, of which $36M is in transit to their warehouses. Although this is a high level for Q2, it is reflective of their planning to mitigate potential exposure to their higher second half spot container rates and extended transit times. “Given our strong sell-in and sell-throughs to date and reviewing the insights into retail demand for the second half of the year, we are quickly pivoting our attention to ensuring that we exit the year with tight inventories at retail and within our own warehouse infrastructure worldwide.” 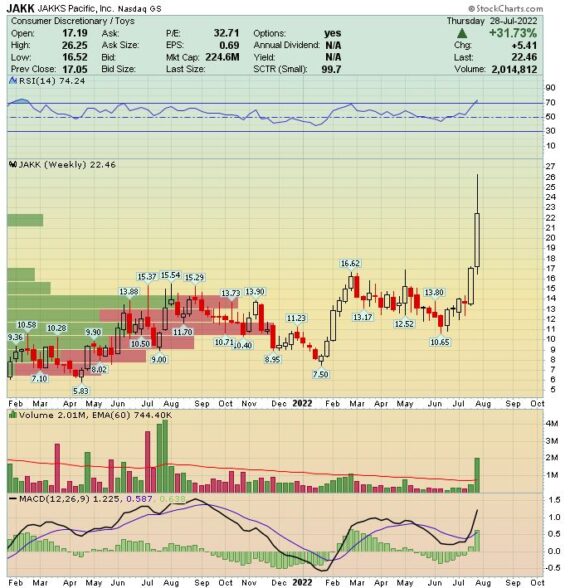