Behind The Numbers – Kura Sushi (KRUS)

Kura Sushi, the revolving sushi bar restaurant, reported Q2 numbers after the close yesterday and provided a business update related to COVID-19. Regarding earnings, it would report:

Management, not surprisingly, would highlight that exiting the second quarter, which ended on February 29, it felt very good about the momentum of the business and ongoing operating initiatives. However, as the news about COVID-19 began to spread, the company started to see a slowdown in sales across the system, particularly in their West Coast Restaurant. “Our initial forecast was to manage store labor hours, but as an increasing number of state and local government issued the new guidelines for public activities, it quickly became apparent that business as usual was a thing of the past.” As these guidelines featured mandatory shutdown of non-essential business, it made the difficult decision on March 18 to close all restaurants system wide. “While many food service restaurants have moved to takeout on delivery services, we believe our technology enabled concept with our level of sushi service model and the distinctive multi-sensory dining experience will be impossible to replicate, and so it has not been an avenue we have pursued.”

CEO Hajime Uba, on the conference call, would also discuss new store developments saying these are generally on hold. However, he would note that some local governments are allowing construction work to continue with certain restrictions. “So, we are currently reviewing our options. We are also looking at the possibility of pursuing some renovations during the downtime created by store closures, while adhering to local and federal regulations and the recommendations regarding safety and social distancing.”

BMO Capital analyst Andrew Strelzik, in a post earnings note, would of course admit that while the operating environment has changed dramatically since quarter-close, all of KRUS’s restaurants are now shuttered, and the earnings shortfall was predominantly driven by G&A cost creep, KRUS delivered its highest comparable sales result in 10 quarters and third consecutive quarter of two-year comp acceleration.

In addition, management appears to be taking prudent steps to navigate current headwinds with an eye to re-opening in a position of strength including:

1. Continuing to pay kitchen staff should simplify operational components of restaurant restart upon re-opening.
2. Continued work on tech/operational initiatives should help mitigate headwinds to KRUS’s longer-term growth trajectory.
3. The decision to renovate several restaurants during the period of system-wide closures should enhance renovation ROIs given no incremental sales losses.

Finally, they added that while KRUS’ burn-rate of $1M per week implies ~6 months of liquidity (lower than what our independent liquidity analysis implied), management indicated cash burn could move substantially lower if needed as capex of $300K per week could likely be halted, weekly rent of $100K could potentially be reduced or deferred, and $350K of store-level labor expenses would eventually move lower if the current operating environment persisted for a prolonged period of time. Moreover, the $20M credit facility with Kura Japan and potential incremental aid from the CARES act provides an additional backstop, if needed, putting KRUS in a position of relative strength from an overall liquidity perspective. 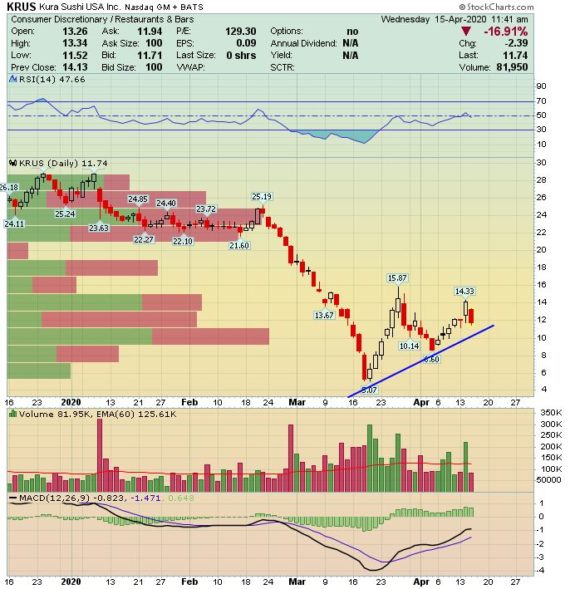