Behind The Numbers – Motorola Solutions (MSI)

CEO Greg Brown would add, “The acquisitions we’ve made in video security and command center software are having a meaningful impact on our business. With our recent purchase of WatchGuard, we’ve now made acquisitions in these two areas that total $2.4B. These acquisitions are expected to contribute revenue of about $1B this year growing high teens with an EBITDA profile of about 20% and growing.”

When asked by Jefferies about tariffs, CEO Greg Brown responded with, “As the tariff trade war continues with China including the tariffs increase that Trump announced a few hours ago that is contemplated in the guidance we’re giving for the full year. Actually it’s $8M or $9M for the full year and roughly half of that for the second half. But that increase that he talked about being implemented September 1 is already contemplated.”

“I remind you that we’ve made decisions going back several years ago where we no longer do manufacturing in China. I think Mainland China revenue was about 1.5% to 1.7% of our revenue. So, we don’t have a concentration there. We don’t do product management. We don’t do software development. So I think we’re pretty well insulated from some of the things that are going on there.”

Speaking about Hytera, management would remind investors that they won the patent infringement case in DC with the International Trade Commission against Hytera that implemented an import ban and a cease and desist order. They’ve had 2 wins in Germany in Mannheim and Düsseldorf. “There is a trial going on as we speak in Australia for patent infringement and source code copying and we’re optimistic about the outcome.” And then, the big one is Chicago in November in 2019. “And despite repeated attempts by Hytera to delay and deflect multiple efforts to push that trial into 2020, we have every reason to believe that it will happen in November in Chicago with a jury trial that will evaluate a trade secret theft and source code copying and we are looking forward to that trial and subsequently that outcome.”

Moving along, according to Urgent Communications, under the National Defense Authorization Act (NDAA), federal agencies are prohibited from procuring video-security from Hikvision and Dahua as of August 13th this year. Next August, rules are scheduled to become effective that would prevent any federal grant money—given to a state or local government entity, for instance—from being used to buy video-security solutions from one of named Chinese vendors. “Given this landscape, many industry analysts anticipate that entities will turn to Motorola Solutions’ video offerings as a non-China alternative.”

On the conference call, speaking about the video security space, management would highlight that Avigilon (recent acquisition) performed well in Q2, growing double digits. “It’s tracking where we expected to be. Video security we think will be about 15% for the full year, which is 3x the market growth which we articulated before. And interestingly enough those results actually don’t really include anything from the federal market. We haven’t gained traction yet, the sales cycle in Fed is even longer than state and local.” 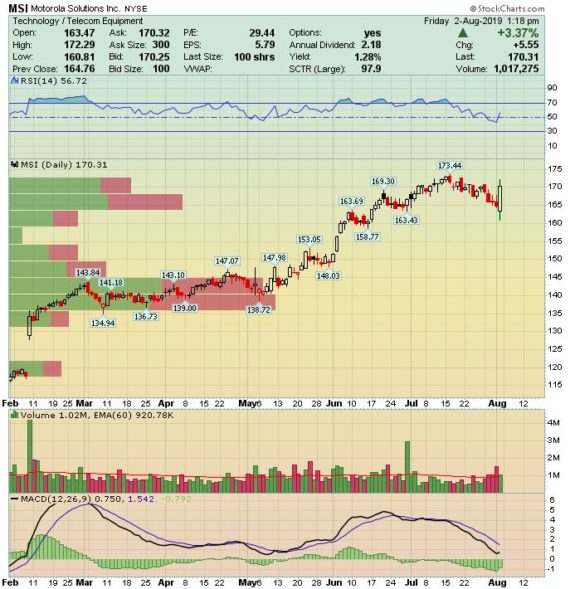