Behind The Numbers – NeoGames (NGMS)

A bullish write-up in NeoGames (NGMS), the global leader in iLottery solutions and services, was first written for Jaguar clients back in the December 20th W/E Research. Shares are up around 70% since and just last week, the company reported its Q1 earnings which touched on each of its current markets:

Management indicated results came in better than expected due to a combination of a few factors. First, they saw a higher and accelerated adoption rate compared to what they experienced in other jurisdictions. As we said in our Q4 call, “We revised expectations higher after we saw a faster pace of player conversion into instant games sooner than expected.” These trends continued through the first quarter and were even amplified with a double jackpot, which brought a significant increase in new players and enabled the lottery to introduce them to non-jackpot games. They also pointed out that online sport betting launched in Virginia during January and this launch did not slow down iLottery in any way.

Results in Michigan continue to perform well as this is another state where iLottery had to compete with iGaming as more than 10 iGaming and online sport betting sites launched and aggressively advertised during the quarter.

Stifel analyst Steven Wieczynski, in his post-earnings note, added that a source of concern from investors they have long heard around the NGMS story is NGMS’s reliance on one state, Michigan, to drive revenues and EBITDA. “We think 1Q21 results demonstrate this narrative is becoming less relevant as the company ramps its newer state contracts.”

Outside of the U.S., revenues in Alberta exceeded the company’s original expectations after only two full quarters of operations for the provinces only regulated iGaming and iLottery website Playalberta. Results are growing and they continue to introduce new gaming verticals. “This quarter, we introduced Live Dealer, and we are beginning to implement the much anticipated draw-games vertical with a wide range of games.”

A topic of discussion and a major catalyst that we have consistently talked about is the opportunity for NeoGames to see growth amid new states adopting this technology. On the call, CEO Moti Malul remarked, “When we look at how the U.S. market evolves, many states continue to have internal conversations and make inquiries into iLottery.”

Truist analyst Barry Jonas, in a post-earnings note, highlighted that NGMS remains in discussions with regulators across multiple jurisdictions as the landscape is constantly changing. Management expects to see an uptick in interest from the individual U.S. states following the COVID pandemic. As for specific states, a bill has been passed in Connecticut and bills have been introduced in Massachusetts, Missouri and Maryland. Ohio remains a bit of an unknown as the current committee process began early last year, but do expect that Ohio could present another positive expansion opportunity for NGMS.

Meanwhile, Stifel noted that we have yet to see meaningful traction from new states as a slow start to the year was not entirely unexpected. Management sees more states potentially bundling iLottery with OSB as they explore gaming expansion, as illustrated by the recent Connecticut legislation. “We note many state legislative sessions will wrap up over the next month or so, which could see expansion momentum accelerate, though these contracts likely wouldn’t impact NGMS’s P&L until 2022.” 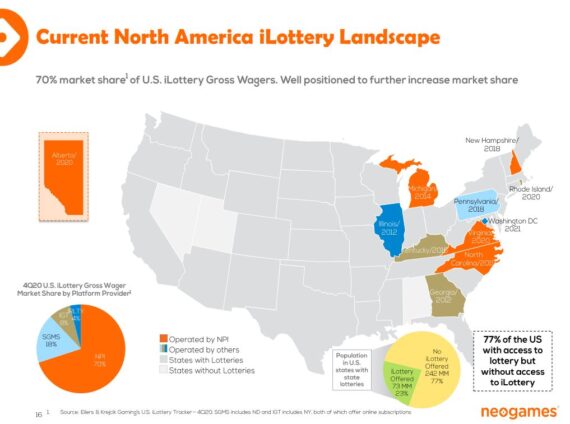 Finally, Stifel said they’ve fielded a number of questions from investors regarding potential M&A for the company. Management has been vocal since their IPO in considering potential acquisition opportunities, largely calling out businesses that are in-line with their current operational focus. However, on the call management noted they have engaged with their Board of Directors on a formal strategic process to help further clarify and define potential M&A opportunities in the broader space. “We would expect management’s preference to remain on opportunities within their current iLottery focus (new game content/ studios, geographies, etc.), though we think management is likely also receptive to expansion into more tangential offerings (iGaming, OSB) especially as their expanding services provided to WMH illustrates the value of their technology outside of solely iLottery.” 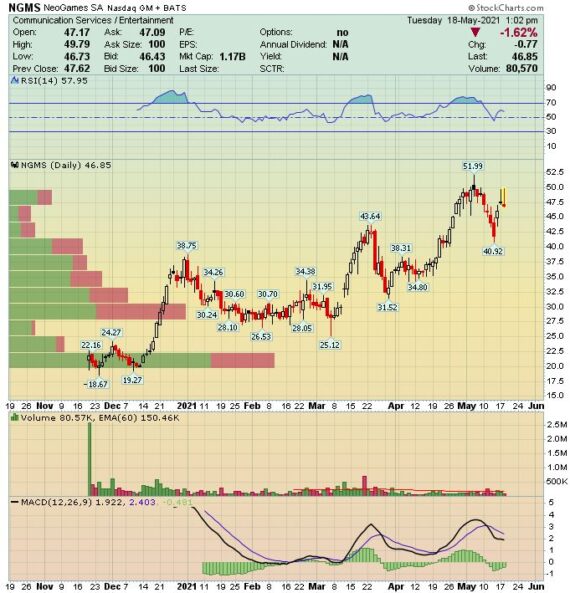