Behind The Numbers – Paragon 28 (FNA)

Paragon 28 (FNA) is a medical device company that is focused on foot and ankle procedures. It’s been a while since we’ve covered this name for Jaguar clients. The last write-ups were on March 6th in our Weekend Research report and then on March 9th in a MedTech monitor article. Admittedly, and as you will see on the chart, shares haven’t done much this year, only up ~9%. Last Friday, shares would pop by 11% after reporting its Q3 earnings the night before.

Total revenue for the third quarter came in at a record $46M, representing growth of 28% compared to the prior year. Breaking it down by geographic region, U.S. revenue was a record $40M, representing growth of 25% Y/Y while International revenue was a record $6M, representing reported growth of 52% Y/Y. As with a lot of medtech companies, the sales force is critical in helping drive sales. Management said they ended the quarter with approximately 200 producing sales reps. “And while we don’t report our total sales force headcount, our total sales force headcount grew nearly 15% year-over-year during the third quarter.” As a result of their sales force, they said did business with nearly 1,900 U.S. surgeon customers, including 587 U.S. producing surgeons, both records for the company and an increase compared to the prior year period of 12% and 23%, respectively.

The company said they have continued to innovate across their portfolio by launching 10 products year-to-date. Since inception, it is approaching 80 product families, including nearly 50 launches since the start of 2017.

“For example, in 2020, we launched our Phantom Hindfoot TTC Nail for ankle fusion as well as our APEX 3D Total ankle replacement. In 2021, we added complementary products such as MAVEN Patient Specific Instrumentation and the FasTrac laser alignment system, both for our total ankle replacement. Through 2022, we have also launched a line of external fixation products with monkey bars and monkey rings as well as soft tissue solutions such as Grappler Suture Anchor, TenoTac 2.0 and our R3ACT Stabilization System. We expect to continue this pace and focus within product development, and we’ll bring a balance of new and next-generation technologies to market over the next few years.”

“As the product portfolio has scaled so has the commercial team, which now stands at ~200 producing reps/distributors in the US. Management highlighted that 589 surgeons were trained in the Q3 specifically, with P28 having launched its mobile lab in early Q3. Moving forward, we expect FNA to follow the traditional playbook for MedTech growth: continuous new product launches and an expanding sales headcount, all paired with a strong MedEd support system. To that point, FNA currently has ~30 products in development with most expected to launch in the next 24 months — something that we expect will support +20% top-line growth over the next 5 years.”

Back in January of this year, Paragon 28 announced that it had acquired Disior Oy, a Finland-based company with a focus on 3D pre-operative planning and analytics for foot and ankle procedures. The deal was for $18M in cash at close with an additional $8M in future contingent consideration based on tech advancements/commercial milestones. With Disior’s anatomy-specific surgical modules, surgeons will be able to access important data for diagnosis and development of patient-specific surgical plans, as well as an assessment of an individual patient’s postoperative outcomes.

Canaccord Genuity added that this deal is not only synergistic with P28’s Additive Orthopaedics acquisition, which occurred back in May 2021, but it also adds Disior’s patient outcome assessment which is a step towards building out Paragon 28’s future post-op capabilities.

CEO Albert DaCosta, during the Q&A session, would say, “We’re actively using Disior meaningfully in our development process and integrating it into even some of the new products we have under active development today. We’re also integrating it with the additive orthopedics line. So a lot of internal work being done there. And one of the comments I made in the prepared remarks is that we’re overwhelmed with how quickly we could answer questions given the 3-dimensional visibility that Disior or software platform like that gives us to — deformities and planning. I would expect to see something later in the year ’23 on the commercial side. And there’s a really nice pipeline of opportunities for us to start integrating Disior into some of the products we’ve got today on the market, including some of the new products that are being developed today.” 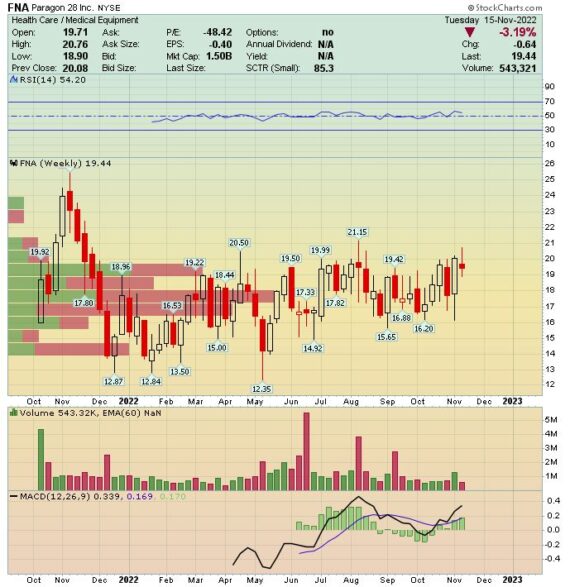