Behind The Numbers – Perspecta (PRSP)

Perspecta, which was spun off from DXC Technology (DXC) in 2018, delivers information technology, mission, and operations-related services across the U.S. Federal Government to the Department of Defense, the intelligence community, Homeland Security, civilian and health care agencies, as well as to certain state and local government agencies through its two reportable segments: Defense and Intelligence & Civilian and Health Care.

Shares are trading higher today by 9% after their Q1 earnings were released after the close yesterday:

Awards – CEO Mac Curtis went over a handful of specific contracts it had recently won, including a $100M Other Transaction Agreement, or OTA, modernizing the IT systems that support background checks and insider threat programs. It also won a 5-year, $162M award from the Air Force to develop and operate a modernized enterprise infrastructure for SIPRNet, the secret Internet protocol router network. Lastly, it was awarded a 5-year, $824M contract by the National Geospatial Intelligence Agency to perform full lifecycle systems engineering and integration work. “This is our largest program in the intelligence community and the new contract significantly expands the ceiling value and the scope.”

Knight Point Systems – Management announced their $250M acquisition that was originally announced last August is now complete and would highlight that they Knight Point has a heavy mix of fixed price contracts and an IP portfolio that differentiates them in the marketplace, including Zeus, a managed services automation tool that allows full visibility into public, private and hybrid cloud instances, and CloudSeed, a FedRAMP-authorized cybersecurity-as-a-service offering, with 24/7 SOC operations, certification and accreditation, ISSO and vulnerability management.

Stifel analyst Joseph DeNardi was out with a post-earnings note highlighting that the company’s commentary around its qualified pipeline and proposals under evaluation was bullish. Perspecta’s pipeline was $77B at quarter-end, an increase from $66B last year and $68B the prior quarter. The value of proposals under evaluation was $24B at quarter-end vs. $17B the prior quarter.

Commentary would then switch to the U.S. Navy’s Next Generation Enterprise Network program, or NGEN. Under the current NGEN contract, Perspecta operates the Navy Marine Corps Intranet and provides IT and network security services for the Navy and the Marine Corps.

According to a July 19th GovConWire report, the Navy announced plans to award Perspecta a contract extension to continue to provide IT services. A FedBizOpps notice that was posted says Naval Information Warfare Systems Command will extend for another six months the current contract’s end-user hardware portion, which will run between October 2019 and March 2020. The network services part will be extended for another four to seven months, which will run from June 2020 or September 2020 through December 2020.

But, on the conference call, Perspecta’s CEO said, “They’ve given an extension. We’ve talked about from mid-2020, could be to December. I’m not sure it’s going to go that far.”

Stifel’s analyst would then speculate that if Perspecta loses NGEN, it’s likely to lose it to Leidos (LDOS). If Leidos takes NGEN from Perspecta, that would represent the clearest and most public signal to date that Leidos’s scale is a clear and present danger to other smaller government services providers. Based on that, we view a Leidos win on NGEN as a potential catalyst for fairly rapid consolidation within the market. In such a scenario, Perspecta would be a sought-after asset – just like CSRA was – which limits downside risk should PRSP lose NGEN. If PRSP wins NGEN (and maintains margin/sales guidance), the stock should re-rate to some degree and close some/all of the multiple gap (~30%) between itself and peers. If PRSP can win NGEN, and/ or another large opportunity, and/or begin outperforming very low revenue growth expectations, additional upside exists.

Finally, while the NGEN opportunity exists, there are other large opportunities expected to be awarded over the next few months which would be additive to our estimates and consensus. “The two largest contracts would be DEOS and GSM-O II which combined represent potential annual revenue of ~$1.5B, albeit at lower than corporate average margins likely.” 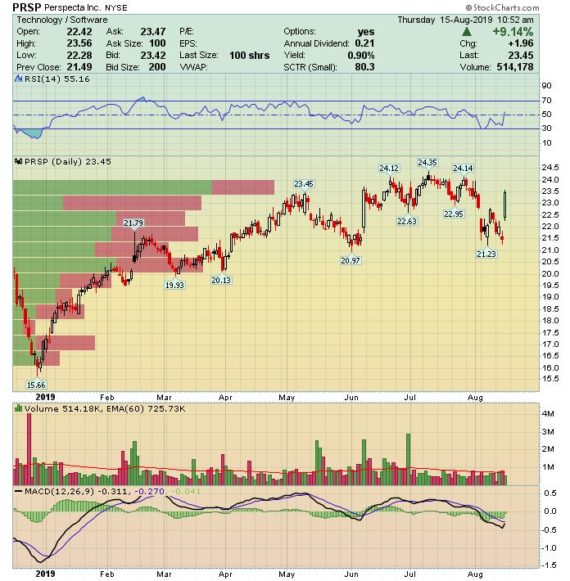