Behind The Numbers – Sherwin Williams (SHW)

Sherwin Williams, the global coatings producer, closed higher yesterday by nearly 3% after reporting its Q3 numbers in which it beat on both the top and bottom line:

In addition, here was the breakdown by segment followed by additional commentary:

The America’s Group – This segment increased 8.7% while comparable store sales in the U.S. and Canada increased 8.1%. Management noted that regionally, their Eastern Division led all divisions, followed by Southwest, Southeast, Midwest and Canada. “Sales were positive in every division in the quarter.”

Consumer Brands Group – This segment decreased 11.9%. Management indicated that of the 11.9% decline in Consumer, over half was tied to the Guardsman divestiture and tough comps from the Lowe’s (LOW) load-in. The remainder was tied to weakness in international, specifically Asia and Australia. That said, according to BMO Capital, based on management’s 4Q guide for consumer to be up modestly, they expect business to turn positive.

Performance Coatings Group – This segment decreased 0.3% with management still seeing significant room for improvement with long-term margin potential of high teens/low twenties. The levers to pull include: 1) Continued pricing to catch up to raw materials (management has moved slowly on price to help their customers manage their way through the inflation, but remains steadfast), 2) Synergies, 3) Growth in the core business, and 4) Further cost cuts/efficiency moves.

With 55% of total revenue coming from its TAG segment, Credit Suisse noted that most bulls were not expecting SHW to post SSS comps >8%, solidifying their belief that SHW’s stores network is well positioned to gain share and deserves its recognition as one of the highest quality compounders in the space.

However, they note that Q3 included a confluence of factors that led to the solid print, such as: (1) Poor 1H weather (creating pressure for contractors to complete jobs before the end of painting season), (2) clear Q3 weather (customers “caught up” on backlogs), (3) incremental constructive housing data points (permits, starts, and turnover inflected positively), and (4) general rate-driven optimism. “We urge investors to note that SHW appears to be easing on its price initiatives moving forward and to set expectations accordingly.”

BMO Capital noted that the contractor market has a full backlog both on the residential and non-residential side, which is helping to drive SHW’s 4Q TAG sales guidance of mid-/upper single-digit growth but also sets the stage for relatively solid growth in at least 1H20 (as pent up demand lingers from the wet 1H19 season).

Raw materials Y/Y were lower in absolute terms as the prices of propylene, solvents, titanium dioxide, and polyethylene have all moved lower, and so cost of goods sold decreased ($74M), leading gross profits to increase by about $210M, or by more than 10%. BMO would comment saying that those raw material tailwinds will continue in Q4 and should also serve as solid lift in 2020. That said, management seemed more poised to push at least modest price (more so than investors we have spoken to had believed), in part owing to labor and freight inflation and also given that in some businesses they have not caught up to raws yet.

Finally, in their note yesterday, Credit Suisse analyst Christopher Parkinson said that in their view, M&A is not necessary for the SHW story to work, but nonetheless is part of the thesis. “We don’t rule out SHW as a “partial” bidder for Axalta Coating (AXTA) (focus on Industrial, but NA Refinish still a possibility, albeit less likely), but “the price needs to be right.” Outside of AXTA, they believe there is a healthy pipeline of tuck-in and bolt-on deals (focus on tech and industrial consolidation). 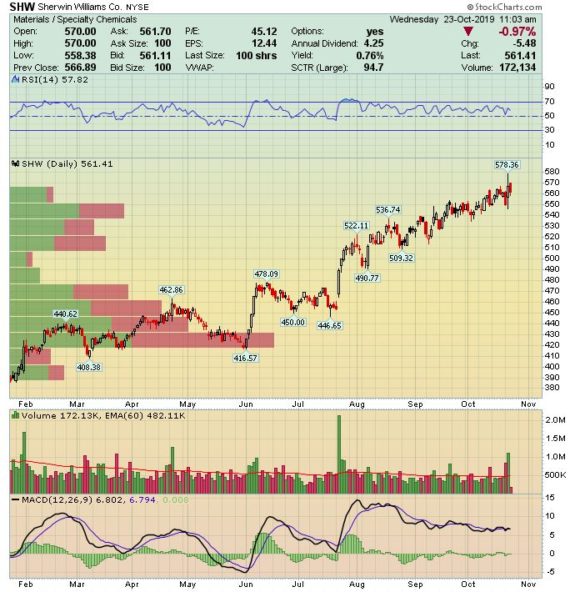