Behind The Numbers – VOXX International (VOXX)

Yesterday, after the close, VOXX International (VOXX), who designs, manufactures, and distributes automotive electronics, consumer electronics, and biometric products in the United States and internationally, reported its Q2 earnings and saw its stock surge over 30% today.

Consumer Electronics Commentary – With the segment up over 50%, management believes the outlook for the second half of the year is even better. Within their premium audio operations, Klipsch branded products did exceptionally well, growing close to 90% Y/Y which was driven by higher sales of home speakers, subwoofers, products for home theater, and ProMedia Speaker Systems. They also saw an over 40% increase in the German premium audio products sales with Magnat and Heco as the drivers.

At the same time, their core distribution for premium audio grew by over 40%. When combined, this led to a consolidated sales increase of over 80%. “Keep in mind, Best Buy (BBY), a key customer only reopened at the end of June and we grew in spite of this. They are now back up and we have several programs slated in the second half of the year.”

Also, at the end of July, the company finalized their partnership with Onkyo Pioneer Corporation to become the exclusive distributor of Onkyo, Pioneer, Pioneer Elite, and the Integra-branded audio products in the Americas. They would set up a new subsidiary, 11 Trading Company, which will market and distribute these products as well as sell their Magnat and Heco German brands in the Americas.

“Keep in mind, our 2Q results do not include contributions from this alliance. We will start delivery in Q3, ramping up next year and contributing to overall premium audio revenue. Without giving a firm number on guidance as we all know things can change, I do feel confident in saying that our Premium Audio product sales should see growth well over $100 million in fiscal 2021 versus last fiscal year.”

Automotive Electronics Commentary – Overall sales, as mentioned above, were up 21% with OEM product sales down $1.1M while aftermarket products sales were up approximately $7M. The aftermarket business was aided by the acquisitions of DEI and VSM.

Meanwhile, their 50-50 joint venture with ASA is doing well and building momentum. “Last quarter, I talked about some of the weakness brought about by COVID and while the business was down in Q1, they remain profitable. We are now seeing stronger results driven by the RV and Heavy Duty markets. Momentum has carried through into September and looks to be promising in the second half.”

Also, in the quarter, the company was awarded approximately $30M of new OEM business building upon the $375M it announced last quarter. “Our collaboration with Amazon to integrate Fire TV into our rear-seat entertainment systems has been a key driver in securing the major portion of our future OEM business and has put VOXX Automotive significantly ahead of the competition.”

Biometrics Commentary – Finally, although the quarter was essentially flat, the company said it is seeing increased interest in EyeLock’s iris technology driven by the difficulties of the other modalities created by COVID. Meanwhile, it announced a number of new partnerships over the past quarter and have begun receiving some of the new products that were in development, ramping up production based on increased demand. As a result, they expect to see higher sales but more importantly more consistency in sales of our secure solution applications and some good news to report. “In the second quarter, we were advised that we were awarded the program that we have discussed in the past within the health care space. We are in negotiations on final terms. And when the contract is signed, we will have more liberty to discuss the positive impact this will have on EyeLock.” Finally, management would remind investors that they hired an investment banker, Imperial Capital to look at alternatives to enhance EyeLock’s position. “We have had a number of interested parties and are evaluating several to determine the best fit for VOXX and its shareholders.” 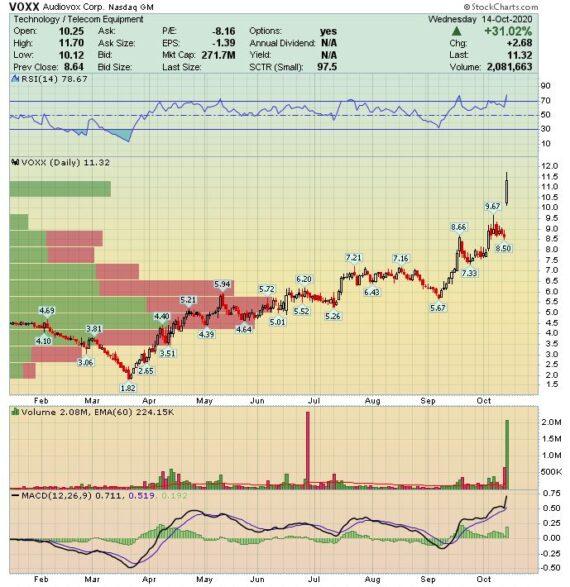