In early November, special purpose acquisition company SilverBox Engaged (SBEA) announced it had agreed to enter into a business combination with Black Rifle Coffee Company. In the press release, SilverBox said that based on four months of exhaustive analysis and diligence, they firmly believe Black Rifle can be a source of “exceptional long-term returns” as well as a catalyst for positive impact within the often-underserved veteran and first responder communities. Once the merger closes, it will trade under the symbol “BRCC.” The merger is expected to close sometime in Q1 2022.

Onto Black Rifle Coffee Company, they are a premium coffee company that was founded by Evan Hafer, a former Green Beret, back in 2014 with the goal of supporting veterans, active duty military, and first responders. It should be noted that a portion of BRCC’s profits on select products are donated to law enforcement, firefighter, and first responder causes directly.

Evan Hafer has said, “From the time I was a one-man operation in my garage with nothing more than a 1-pound roaster, I wanted to use coffee as a means of bringing people together around the common idea of honoring those who serve this great nation. We founded Black Rifle Coffee to serve the highest quality coffee while supporting Veterans and their families. As a company founded and led by Veterans, serving these communities drives everything we do.” 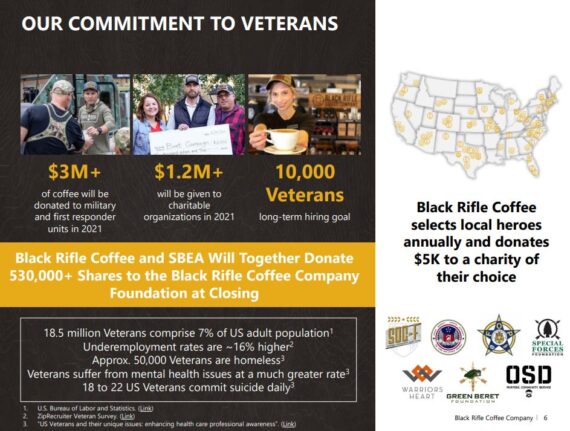 Direct-to-Consumer: This segment includes both subscription and non-subscription sales via the company’s website, as well as sales through third party digital marketplaces. According to the filing, the subscription business has grown at a 218% CAGR since inception and includes 270,000+ active coffee club subscribers as of June 30th. The subscription business obviously provides a recurring revenue stream with strong customer retention, as evidenced through a monthly subscriber churn rate of approximately 3.5% which is well below the industry average of approximately 10%.

Wholesale: Black Rifle’s wholesale business includes sales of coffee products, including the rapidly growing ready-to-drink (RTD) coffee beverage product, available through major national outlets such as Speedway, 7-Eleven, Sam’s Club, Walmart, Publix, Casey’s General Stores, and others. BRCC’s ready-to-drink coffee beverage product has grown to be a top 4 brand in its $4 billion category since its launch approximately 18 months ago. You also have sales of merchandise and gear through lifestyle retail outlets, such as Bass Pro Shops, Cabela’s, Scheels and 5.11 Tactical.

Outposts: Finally, Black Rifle’s Outpost business includes sales through both company-operated and franchised retail coffee shops (i.e. physical locations). As of June 30th, the company had seven Outposts, including three company-operated and four franchised locations, with nine additional locations expected by fiscal year end 2021. Outposts provide an immersive retail experience to BRCC customers, including showcasing its brand and premium products and building a community around the commitment to the active military, Veterans, first responders and those who “Love America.” Per their investor presentation, priority markets for expansion include Phoenix, Dallas, Houston, San Antonio, and Salt Lake City. 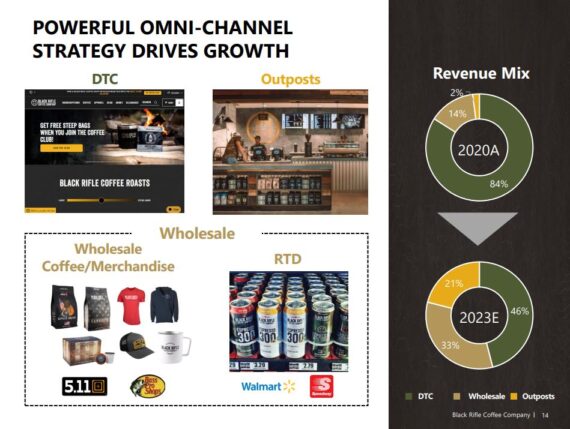 BRCC in the News – John Egan of CultureMap Dallas wrote in an article on November 10th that given its conservative “American way of life” mantra, Black Rifle has attracted both admirers and critics. Back in July, The New York Times published an article with the headline: “Can the Black Rifle Coffee Company Become the Starbucks of the Right?” The company gained fans in conservative political circles during the administration of President Donald Trump. “Before long, Black Rifle became the unofficial coffee of the MAGA universe, winning public endorsements from Sean Hannity and Donald Trump Jr.,” the Times reported.

Meanwhile, InvestorPlace reporter Ian Bezek noted that it hasn’t been all smooth sailing for Black Rifle. The company has sought to distance itself from certain people on the right. More specifically, Black Rifle famously came out against Kyle Rittenhouse, as back in November 2020, he was pictured wearing Black Rifle merchandise and then, as most know, got involved in fatal shootings in Kenosha, Wisconsin. At the time, CEO Evan Hafer estimated that the company had lost between 3,000 and 6,000 subscribers due to its disavowal of Rittenhouse.