Blog Post: What Will It Take For Me To Turn Bullish

I see the same S&P chart with 200-day moving average as everyone else. Like it is some sort of magic line which suggests that if we decisively breakout above, it would mean bull market and below means continuation of bear market. Every technician has his/her eye fixated on that one line. Trust me, I get it. Technically, this market indeed looks very good with bullish bias to trade opportunistically many breakouts happening all around us from semis and industrials to cryptos and memes. There is something here for everyone to be positive about in high beta and just the mere confirmation with breakout in QQQ vs SPY ratio chart is quite amusing. Regarding big cap tech stocks:

The breadth signal has improved tremendously as well which is hard to ignore. For example, the 10-day NYSE Advancers to Decliners ratio registered 2.10 last week. The last two times this happened was in April 2020 and January 2019, both of which marked significant bottom in the market. The ratio is good, if you ignore the fact it also gave many false alarms during 2008. US Dollar decline continues nonstop, which means risk-on for emerging markets so all of Latin America and Pacific Asian countries are ripping higher lately. EEM has outperformed the SPY by 650 bps YTD. On Jan 17, the NYSE registered +116 New Highs minus New Lows reading, which is the highest since this entire bear market began in November 2021 so another breadth signal confirming the rally. Looking at sector performance to gauge risk-appetite, XLP, XLU and XLV ratio charts vs SPY all three broke down last week, indicating money is rotating out of defensives and into risk.

Fundamentally, what if lets say in 3-6 months we see headline CPI inflation print of 3% or lower driven by services disinflation (which is the last piece remaining that hasn’t rolled over yet), while labor market data from ADP, NFP and Weekly Claims remain as strong as they are now? Arguably, in this scenario, the “soft landing” crowd would be perfectly correct. Could we get to +200 or +300 real rates in 6 months while at the same time New Orders in ISM Manufacturing and Services recover from current 45 level (contraction) to expansion territory given easing supply chain pressures without any deterioration in labor market? Single family Housing Starts are already down -32% from the peak, so is this the bottom?

On other hand, all “leading” economic data points are flashing red signs everywhere, exactly like how it plays out in a typical recession playbook. The HOPE Framework from one of my favorite follows, Michael Kantro of Piper Sandler, continues to suggest increasing number of corporate warnings in coming months. This has already started. Market has never bottomed when the Fed is still tightening. That’s just a hard fact. We still have another 75 bps of rate hikes coming to take the terminal to 5%. Beyond that everyone sees rate cuts in 2H23, while the Fed keeps warning it won’t happen, setting the stage for serious disappointment. See Waller speech HERE from last week as just one example. Separately, for those who keep hoping for a pivot, be careful of what you wish for. As explained in Jaguar 1Q23 Outlook, the worst type of equity market sell off (which I would label as Elliott C-wave) happens when you have the following two conditions: 1) The Fed is “cutting” rates and 2) financial conditions are “tightening.” That phase hasn’t happened yet.

While equities rally, the bond market refuses to budge. The 6-month, 1-year and even 2-year UST yields aren’t coming down as fast as we would have seen by now already if inflation was truly decisively rolling over. The biggest driver of disinflation in the past 3 months has been crashing energy prices, while services ex-shelter inflation has remained very sticky. Since bottoming in mid-Dec, RBOB gasoline futures are up +31%, copper up +14%, iron ore up +9%. The CRB Commodity Index broke out last week from 5-month downtrend. This will gradually start to impact Prices Paid with upward pressure in ISM Manufacturing Index in coming months which is currently very depressed at 39. So there goes out the window any excitement about continued disinflation in goods. The point is, the very thing which has helped bring inflation down is now contributing to upside, while services remain sticky. Since Powell’s 8-minute forceful Jackson Hole speech last September, he has pressed the on the idea of “need to be restrictive” 37 times and yet their own National Financial Conditions Index (NFCI) is back to 11-month high. Conditions have materially eased!

So, I find myself at the crossroads of what could potentially be a big turning point for market, just as the wedge and Bollinger Bands in the S&P keep tightening, which often means a significant decisive move is coming soon in either direction and it could be violent. Feels like perfect time to buy 2 to 3 month out strangles in SPX with realized volatility near 52-week low. See the S&P chart below.

Now, regarding the main question: What will it take for me to turn bullish on market? I am hard wired to do sanity fundamental checks by keeping my focus on leading data. The answer is when Conference Board Leading Economic Index (LEI) starts moving higher. Long term Jag clients know very well it remains my favorite indicator of all time with perfect track record. When this goes below zero, I turn bearish. Plain and simple. We started to point out to clients sharp deterioration in LEI “rate of change” in summer 2021 and since then we’ve been bearish. 18 months later it still hasn’t improved. Never in history since 1960, this indicator has posted 6+ consecutive months of m/m decline without the US going into a recession. The last reading was 9 consecutive monthly decline as shown in chart below. The GDP deterioration will eventually follow with a lag and currently it is pointing to -2% or worse in coming months, which remains our base case scenario for 1H23. Whether it be hard or soft landing will depend on labor market, but there will be a landing of some sort. Bottom line is my favorite indicator is giving me red hot flash warning which keeps me on sidelines, while everyone is fixated on breakout through 200-day moving average. 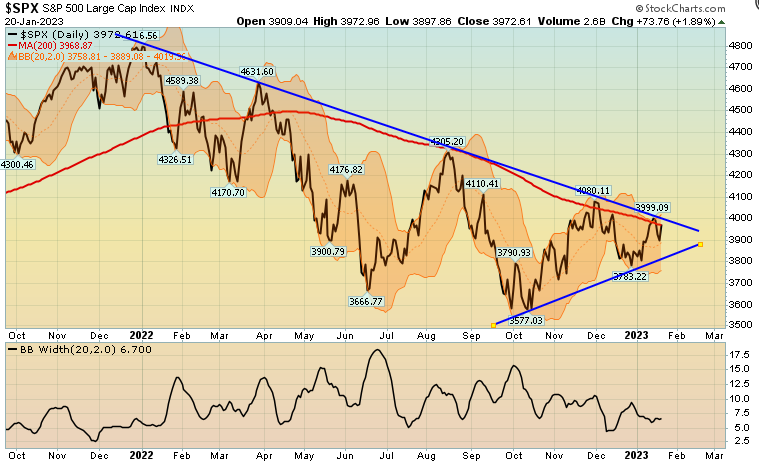 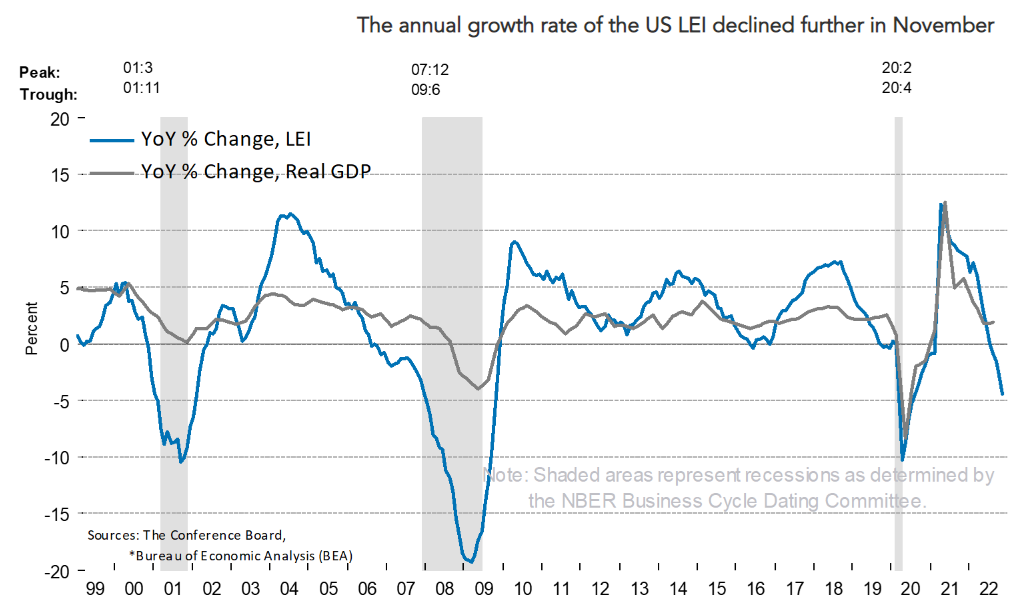