Brinks, the world’s largest cash management company, spoke on its Q2 conference call saying that as they begin their seasonally stronger second half, they’re confident that they’ll achieve their full year 2019 guidance, which includes operating profit and earnings growth of around 20%, albeit despite currency headwinds and the previously disclosed addition of $20M – $30M in operating expenses to support IP upgrades and the development of its next leg of their strategy, referred to as Strategy 2.0.

With regards to currency headwinds, management highlighted that in 2018, the Argentine peso lost about half of its value to the U.S. dollar. “We expect the peso to continue to devalue, but the impact of that devaluation, as you can see on the chart should decrease each quarter versus prior year comparisons.” 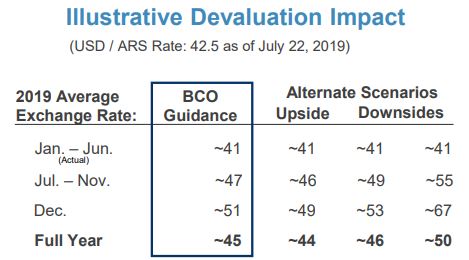 Unfortunately, on August 26th, Brink’s filed an 8-K and prepared a slide presentation to update investors and analysts with respect to the recent developments related to the Argentine peso, which had devalued 23% since the company’s Q2 earnings release.

As part of the presentation, Brink’s noted that based on an external independent forecast of peso devaluation to 70 per USD (full-year average of 50), the estimated impact on forecasted non-GAAP operating profit and adjusted EBITDA for full year 2019 would be a decline of $8M.

This morning, Buckingham Research analyst James Clement would issue a note reducing his estimates and price target after the Argentine government’s announcement of currency controls to stem the tide of eroding foreign reserves to protect the value of the peso. “Generally speaking, we view these kind of measures as terrible public policy that will likely impact BCO’s ability to repatriate dollars from the struggling country.”

The analyst had encouraged investors to look at last week’s updated disclosure from BCO about the summer devaluation of the Argentine peso for more-detailed financial assumptions but, big picture, “We now estimate Brink’s Argentina will generate about $72M of EBITDA in 2019 (versus our prior estimate of about $85M). This estimate assumes an average 2019 peso-to-USD rate of 55 versus management’s initial assumption of 45.”

In Buckingham’s view, sell-side estimates need to come down. In less than a month, BCO has lost about $700M of market cap. Assuming prior EBITDA assumption of about $85M for Argentina and that investors have marked BCO ARG to zero, the lost market cap (assuming the sell-off was all ARG-related, which is probably true) implies that investors had been valuing BCO ARG at about 8.2x EBITDA, which is far too high, in Buckingham’s view, for a stock that’s been valued in the 8x and 9x neighborhood. Brink’s Argentina should have been valued far less–probably more like 6x, in their view. 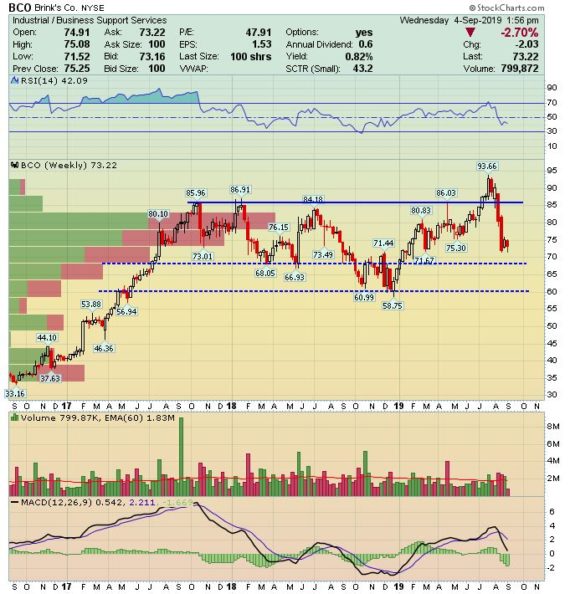