Operating largely in Northern Alberta’s oil-rich areas, Canadian Natural Resources (CNQ)  is one of Canada’s largest energy companies by revenue, and the largest by oil and gas production volume. CNQ trades on NYSE and TSX with a very liquid 1.069B share float as well as Options on both sides of the border.

Horizon oil sands expansion is nearing its next  completion phase which  will add 45,000 bbl/d to production in 4Q16. The final phase of completion is slated for 4Q17 and that will add another 80,000 bbl/d. Once complete, production life- rate will be 250,000 bbl/d for approximately 40 years.

Once Phase 2B is completed in 2018, CNQ expects production costs to be below $25/bbl. Industry estimates for WTI are for $60/bbl in 2017 and 2018, although these numbers get revised periodically. 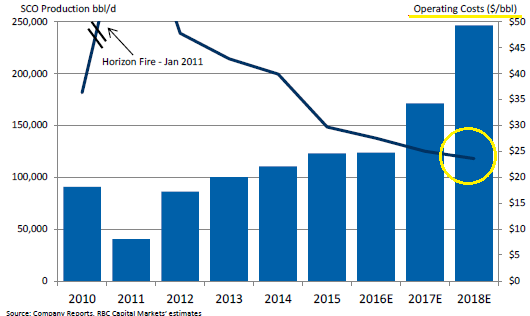 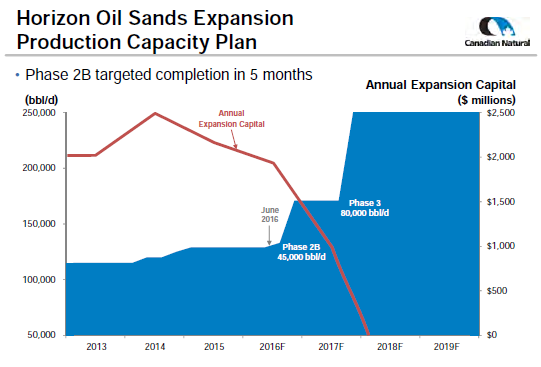 CNQ pays out a quarterly dividend of $0.23, yielding 2.5%. The company has never cut its dividend, one of the very few exceptions to the trend that saw a  multitude of energy producers slash their dividends over the past year to preserve operating cash flow to remain operational.

RBC Capital forecasts fcf of $3.1B and $3.0B for 2017 and 2018 respectively, and notes that the company’s main objective is to improve their balance sheet and pay down debt. Dividends, further development and acquisitions round out the list. 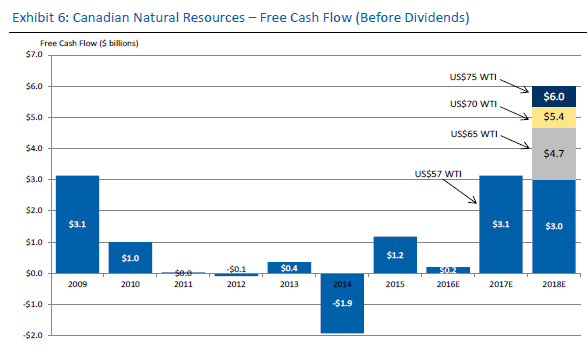 There are other projects currently producing oil and natural gas in Alberta, and many that are awaiting development.

In November 2015, CNQ sold its royalty production to PrairieSky (PSK.to) for $1.8B, $680MM in cash and 44.4 million PSK shares. In early June, distributed 21.8 million of those shares as dividend. The remaining shares have a market value of nearly $540MM which the company plans to deploy at some point in the future, either as a liquidity lever or yet another dividend.

In February 2011, CNQ entered into a 50/50 joint venture partnership with North West Upgrading, a private entity, to build, manage and operate a new bitumen refinery Northeast of Edmonton. Starting in 4Q17, Phase one of the project will process 50,000 bbl/d of bitumen, 37,500 for the Alberta Petroleum Marketing Commission (APMC), and 12,500 for CNQ.

Shares have recently pulled back about 5% after a 100% rise and have dropped slightly below the steep uptrend line. MACD could come down a little more. Support at $28.46. 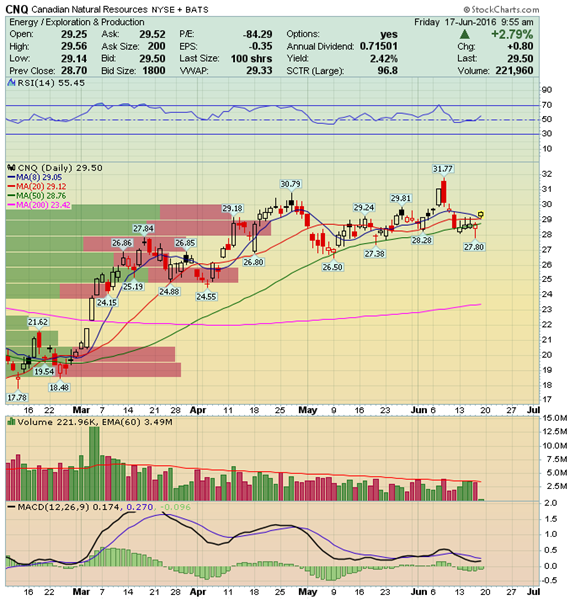 There are many more reasons to like Canadian Natural Resources: growth potential, rising cash flow, capital spending reduction, deleveraging of balance sheet and dividend payouts are just some of the key reasons. Add to that the entire energy sector’s convincing rebound since crude’s February bottom, plus industry analysts’ forecasting WTI to balance around $60/bbl, and it gets very hard to look past CNQ’s potential.