Myovant Sciences (MYOV) is a biotechnology company focused on innovative treatments for women’s health and prostate cancer. Its lead investigational drug candidate is called Relugolix, which is for the treatment of heavy menstrual bleeding, endometriosis-associated pain, and advanced prostate cancer.

The company has five international Phase 3 clinical trials, two in women with heavy menstrual bleeding associated with uterine fibroids (LIBERTY 1 & 2), two in women with endometriosis-associated pain (SPIRIT 1 & 2), and one in men with advanced prostate cancer (HERO). 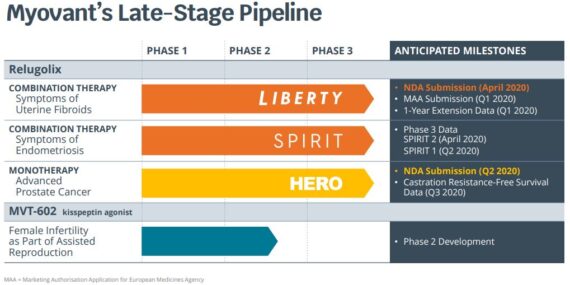 Before highlighting the company’s next catalyst, here were a couple of notable events from the past year:

-Back in November 2019, Myovant announced that its Phase 3 HERO study of once-daily, oral relugolix (120 mg) met its primary efficacy endpoint and all six key secondary endpoints in men with advanced prostate cancer. 96.7% of patients achieved and sustained testosterone suppression vs. 88.8% of leuprolide patients. Key secondary endpoints were also met that demonstrate relugolix suppresses testosterone and PSA more quickly and deeply than leuprolide.

-In June, the company announced that it has submitted a New Drug Application (NDA) to the U.S. Food and Drug Administration for its once-daily relugolix combination tablet for the treatment of women with heavy menstrual bleeding associated with uterine fibroids. The NDA submission in uterine fibroids is supported by positive results from the Phase 3 LIBERTY program, which included two multinational replicate studies and an open-label extension study through one year.

Holding Out for a HERO

The next catalyst investors will be keeping an eye out for will be taking place in Q3 (so anytime this month), and that is the castration resistance-free survival (CRFS) data from the HERO trial.

Evercore ISI analyst Josh Schimmer was out last month providing a deep dive into relugolix for prostate cancer and how their confidence shows that MYOV is one of the most undervalued companies in biopharma. They therefore see the CRFS data readout as a “heads you win, tails you win” setup. Now, it should be noted that CRFS data is not a critical component for adoption, and it is admittedly a somewhat challenging endpoint to hit. Nonetheless, it is the next MYOV catalyst.

What else do we need to know about the upcoming CRFS data? In addition to the cohort of 934 patients for the primary endpoint (including 295 metastatic patients), Myovant enrolled an additional 139 metastatic prostate cancer men to get a total of 434 men in the metastatic CRFS endpoint cohort. The reasoning for this was that the event rate would be too low to test for statistical significance in the non-metastatic population alone. Myovant will be testing the CRFS endpoint separately in both the 434 metastatic patient cohort, and the ~1,100 entire study population.

The analyst was also able to get specialist feedback from community urologists and the message was rather consistent:

-Almost every patient would prefer an oral option over an injection
-View the rapid onset/offset and oral profile favorability, would use relugolix over degarelix
-Anticipate relugolix being preferred GnRH agent, esp. if able to dispense from their pharmacies
-Comfortable switching stable patients to relugolix; would expect to do so broadly

Finally, as highlighted earlier, Evercore admits that this will be a challenging endpoint to hit, but shares aren’t likely to be punished if the results aren’t favorable. In fact, here is their Risk/Reward setup: 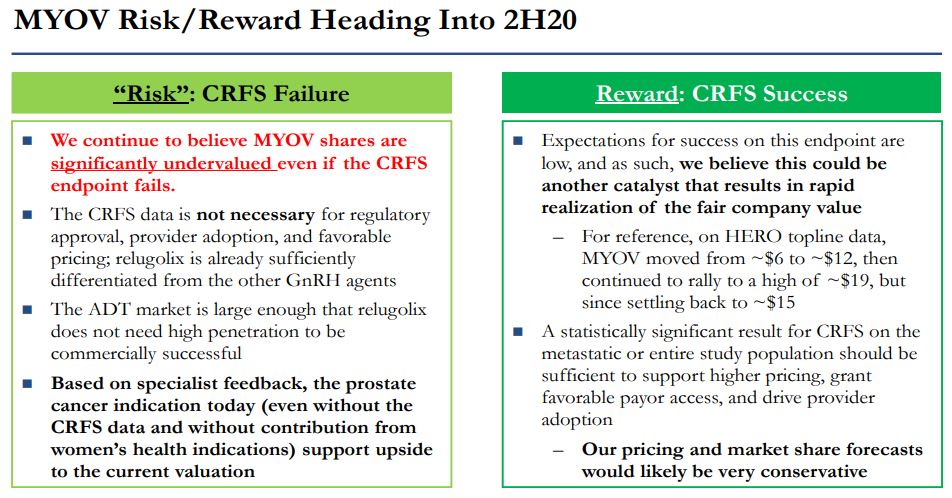 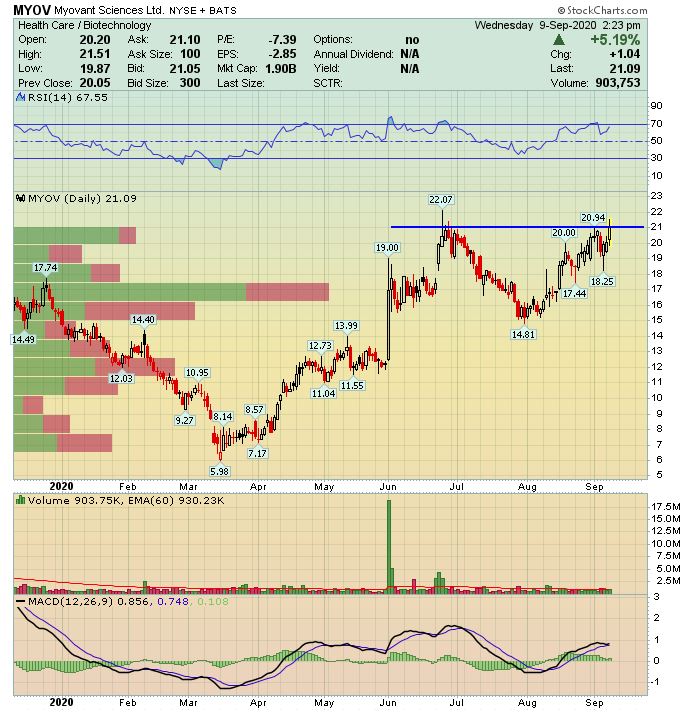