On August 12th, the first round of elections in Argentina produced a shock result in which current President Mauricio Macri (who is perceived to be market-friendly) received only 32.1% of the vote. Meanwhile, 47.7% of the vote went to Peronist opposition candidate Alberto Fernandez, whose running mate happens to be former leftist President Cristina Fernandez de Kirchner (known for her frequent use of state interventions). When the news broke, the Argentinian peso and stock market sold off 25% and 35% respectively within a matter of minutes. With the presidential election coming up this weekend on October 27th, we would like to take a close look at a skewed risk-reward opportunity on the long side, which could either become permanently worthless or turn into a phenomenal multibagger depending on how the situation plays out going forward…

Central Puerto is a conventional and renewable energy generator based mainly in the central regions of Argentina. Their shares trade as an NYSE-listed ADS and are currently down a staggering ~70% from where they were before the first-round elections. A general overview of the company can be seen below:

Judging by the huge selloff, both on an absolute and relative basis, the market clearly views utilities as being a sector that’s going to be right in the crosshairs of what is looking likely to be a more authoritarian leadership after the weekend (the latest polls this week have Fernandez winning by anywhere between 16 to 22 percentage points). With inflation currently at 53.5% as of September and the economy having failed to record a positive quarterly GDP growth rate since 4Q17, market participants are rightly fearful of seeing an introduction of populist, interventionist policies not unlike those of the 1940s-50s Peronist years.

At the heart of the bearish concerns is the possibility of FONINVEMEM program (aka “FONI”, which stands for “Fund for the Investment Needed to Increase the Supply of Electricity in the Wholesale Market”) receivables getting modified or even cancelled altogether. According to the latest corporate presentation, the company has $512M in receivables (paid in USD) from FONI and they reported Power Generation EBITDA of nearly $300M with a net debt of $470M for the 12 months ended June 30th 2019. It is because of this debt to EBITDA that it is highly crucial the government abides by its contract. If we take away those receivables, and possibly add strict interventionist policies and currency controls into the mix, then Central Puerto will be in hot water (hence why the stock is currently “cheap” on a market cap of ~$550M and could go even cheaper).

During 2Q19, machine availability of thermal units reached 92%, and it was this segment’s 16% increase in generation that drove overall energy generation to grow from 3,145 GWh the previous year to 3,256 GWh (or +4% YoY). The company recently acquired 3 heavy-duty gas turbines totaling 969 MW, which can be used in potential new combined cycle projects for up to 1,456 MW. On October 8th, two of those turbines were put to work (under a 15-year power purchase agreement) when the new Lujan de Cuyo cogeneration plant commenced operations by an impressive 7 weeks ahead of schedule. Currently, there is one additional thermal project to come online in May 2020 (also a 15-year contract): 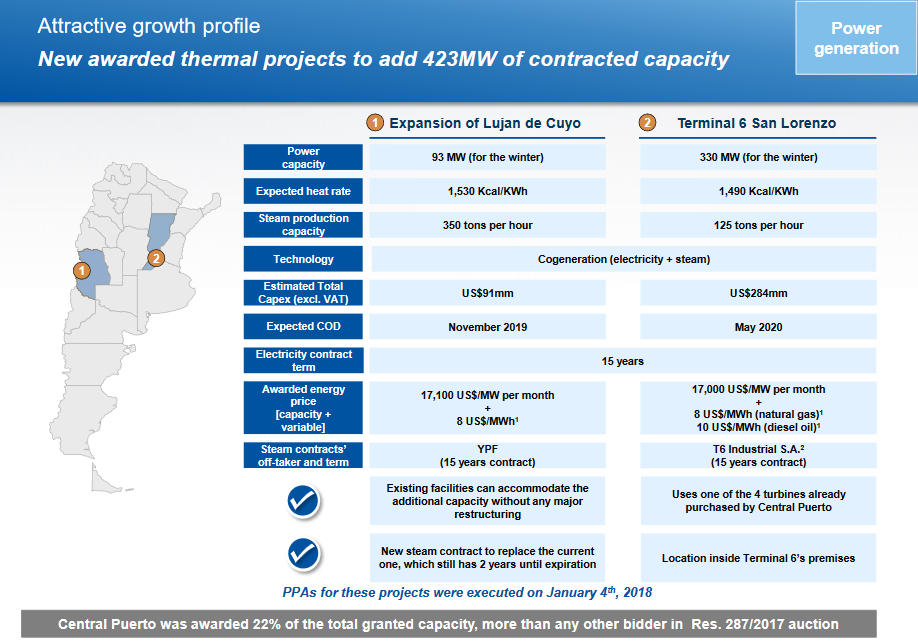 Additionally, back in February, the company acquired the Brigadier Lopez plant from government-owned IEASA for an estimated $165M (while taking on $161M in debt, so they may be regretting that slightly now). They plan to increase the unit’s capacity by 50%, and at the end of construction, the plant will have 420 MW of installed capacity: 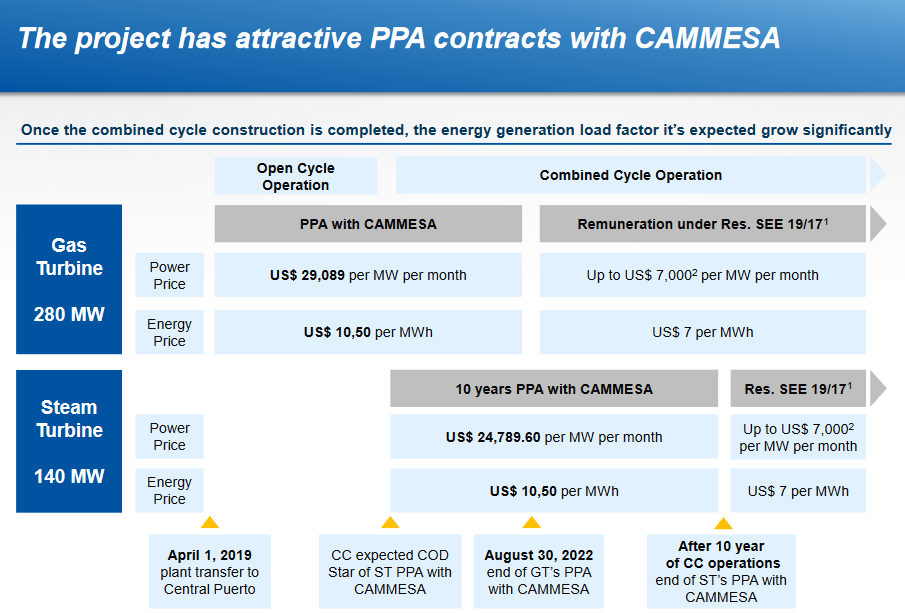 There are also several other smaller projects the company is working on, including the La Genoveva II wind farm announced on September 14th (which forms part of the 180 MW currently under construction and expected to start operations during 2019 and 2020). All in all, current projects in the pipeline are forecasted to grow total MW capacity by 19.2%: 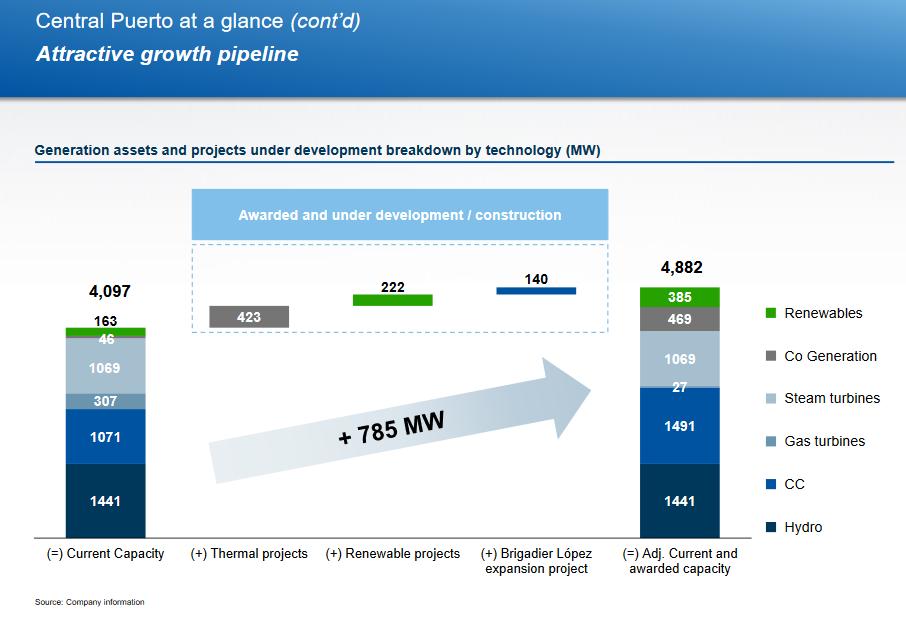 Looking at the transcript of the most recent conference call, CEO Jorge Rauber had this to say about the political situation and the FONI program:

“The first thing to say is that we assume ⁠— our expectation is that the government if changes, it’s expected will not change the regulation regarding the PPAs which are currently setting us. All our expansion planning is based on PPAs paid in dollars and we don’t expect any kind of change. Why because it’s what they did in the past, in fact they were in power for a long time and would comply with the rules regarding the PPAs… Partly the regulation will change or this ⁠— for the existing plants perhaps there is some risk of pacification. But that will just target the ⁠— which is called the legacy capacity and not the expansion of all the units of the system. Change in regulation regarding the PPAs will have a very bad impact on the market. There are a lot of projects under construction and the changed regulation regarding this will be very bad signal for the market. And we don’t expect them to take this kind of measure.”

He went on to point out that the FONI program was created by the leftist former President Cristina Fernandez de Kirchner’s own administration:

“No, for sure, they created that scheme. So, this ⁠— I mean our contract was signed with them. And for the years that we were related to that kind of program, with that government they always comply with the installments. They duly paid all the amounts that were agreed. So, we don’t expect changes regarding this. I mean it was a project created by them.”

So, if management is to be believed, then even if we assume Macri loses (a high probability outcome), the incoming regime isn’t going to repeat any of its past antics or renege on its own past contracts. This would be a highly bullish scenario; in which case we’d be looking at tremendous upside even if we slap the most conservative of multiples on earnings due to the current battered market cap. On the other hand, if the new administration starts tearing up contracts, imposing tighter controls, or perhaps even seizing companies, then a 100% loss is absolutely possible. Thus, in a sense, CEPU shares have become effectively a call option on rational governance (strong risk tolerance required!) 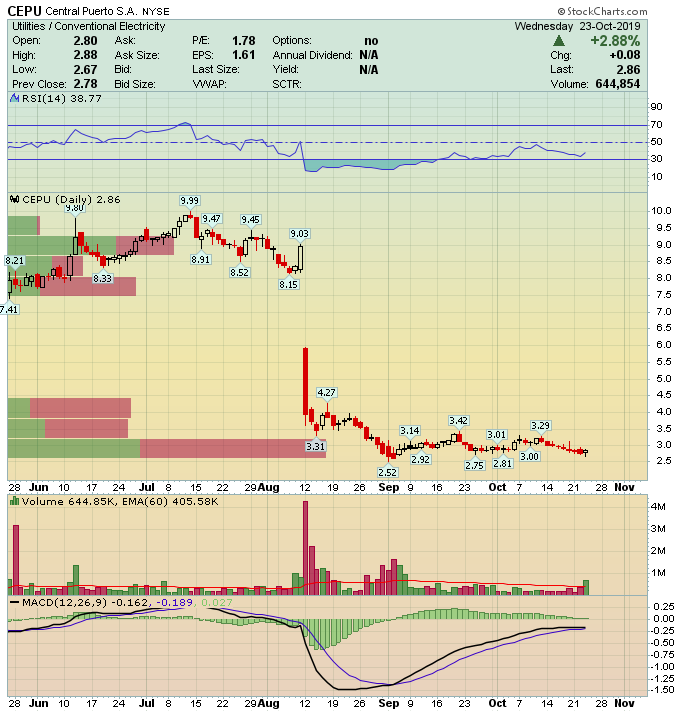