At 1:26 pm ET today, a buyer of 181 September 115 calls paid $6.20 to $6.70 asking price. Aggressive bull on a wide spread with the stock currently at $110. About $112,000 bullish bet. Perhaps too small for many to care, or perhaps some short is hedging a position considering there is 13% short interest here. But here is an interesting note from Leerink on June 15:

“AGIO presented a substantial update on all three of its clinical-stage programs, AG-221 (IDH2 inhibitor), AG-120 (IDH1 inhibitor) and AG-348 (pyruvate kinase activator) at the 2015 EHA conference in Vienna. Overall, the very encouraging early data on AG-221 appear to be replicated in a much larger cohort of patients (n=177), in additional hematological malignancies beyond AML, and with a duration of response that appears to extrapolate to approximately 1 year, which we would consider to be impressive if confirmed. On the other hand, additional AG-120 data look numerically slightly worse as compared to AG-221 data but it is still in the early days. Looking ahead, given relatively mixed expectations, we believe AG-120 solid tumor data in 2H:15 could potentially be a positive catalyst even if it fails to show robust activity in brain cancer but data in other solid tumors are supportive. Additionally, we expect continued high interest in the name heading into the first Phase II data in patients for wholly owned orphan disease drug AG-348 (pyruvate kinase activator) potentially in the next 6-12 months. We remain OP-rated with a $124 price target.”

The catalyst is expected during the second half of 2015 with no clear date provided. Perhaps it is coming soon, and could be somebody out there has better research and they are positioning for a coming rally via September 115 calls. 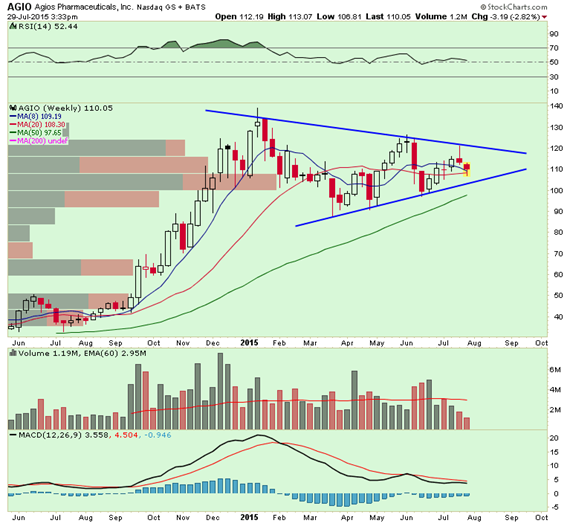