Companhia Paranaense de Energia (ELP), or more commonly known as Copel, is an integrated utility and telecoms provider based in the state of Parana, Brazil, which has a population of just over 11M. They are a relatively small player in the country compared to giants like Electrobras, but they have gradually expanded their operations across 9 additional states in recent years. Currently, they have a total installed capacity of 6.30GW (12,806 GWh sold in 3Q19) with another 692 MW estimated to be added in 2020. The latest summary of the company’s assets can be seen below: 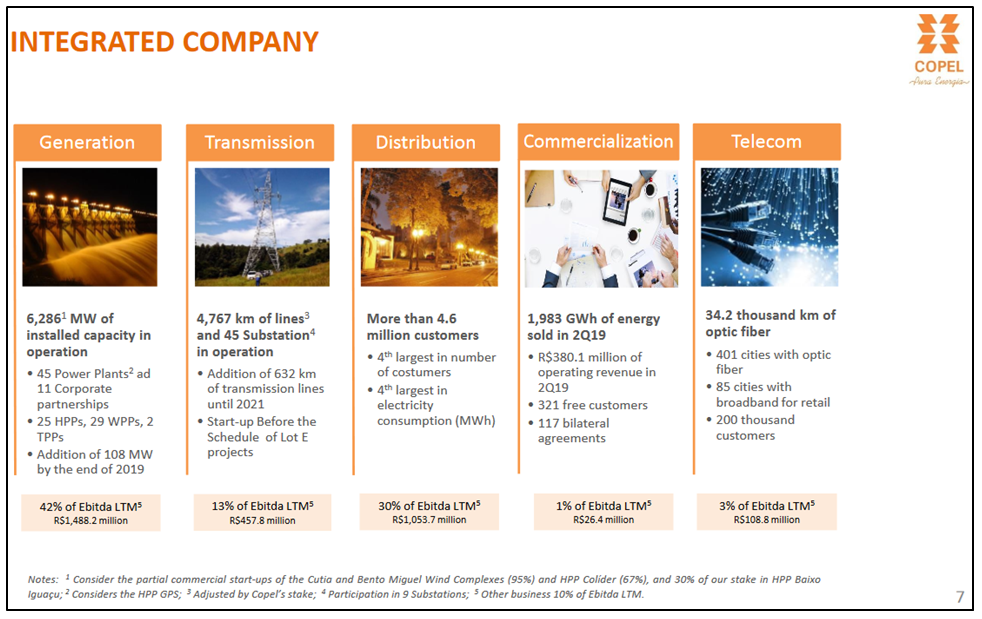 The company has significantly invested in growth in past years, and is planning another R$2.09B of capex in 2020 (down slightly from R$2.12B in 2019). This has increased their debt burden (more on this shortly as it is an important part of the long thesis), but has improved the future growth outlook tremendously, and should consequently lead to many years of safe cash flows from their Power Generation and Transmission segments: 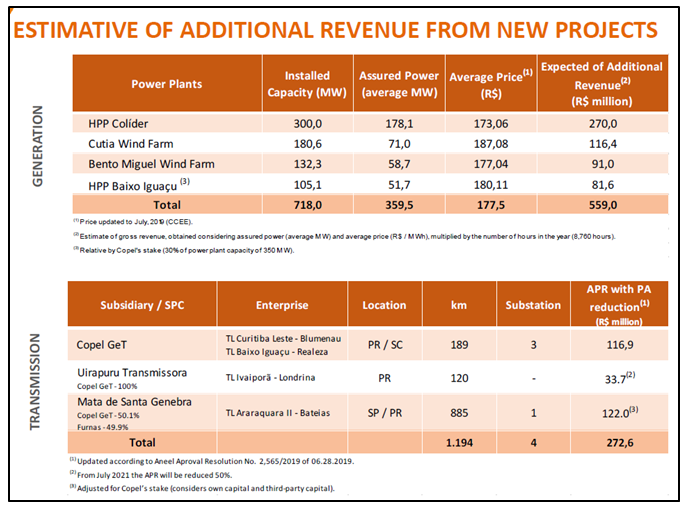 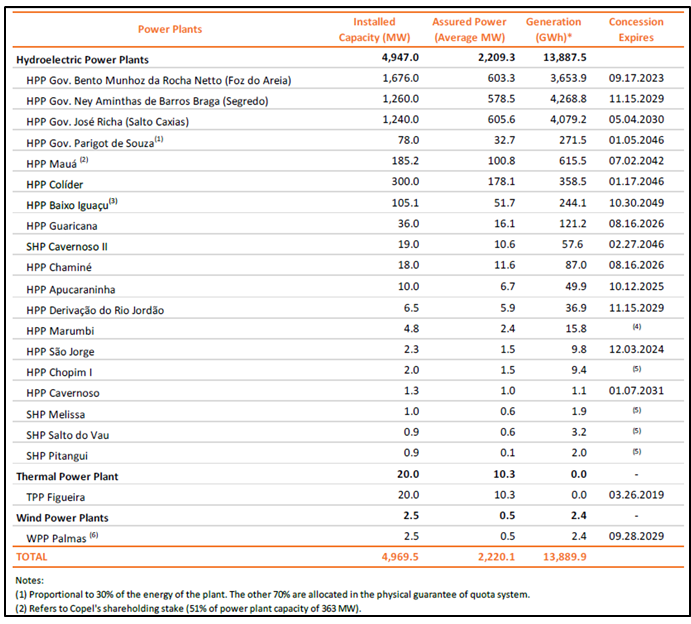 What’s key to note here is that while Copel has invested a staggering R$15.5B over the last 6 years (inclusive of 2019), the vast majority of generation projects have already been launched in late 2018 and 2019. In fact, in their most recent presentation, the company has already given the signal that the heavy capex cycle is coming to an end even if new potential projects are announced. This bodes well for shareholders. 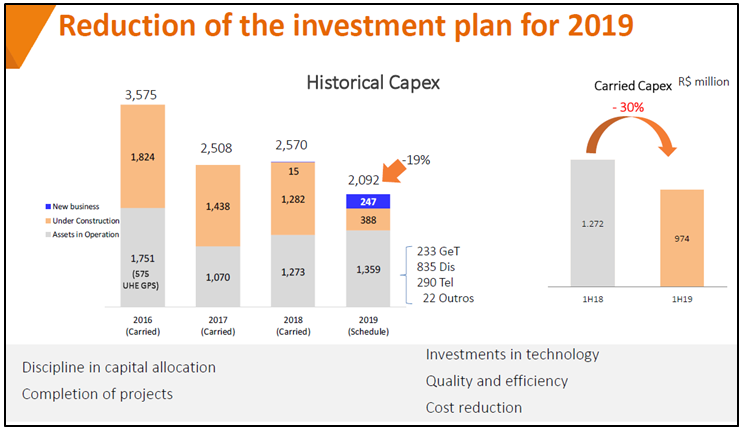 In addition, during the Q3 earnings conference call on Nov 13th, CEO Daniel Slaviero highlighted the sort of restrained spending we can expect going forward:

“Another highlight in this quarter is that we were awarded the new energy generation auction A-6, which happened in October… The amount of sold energy represents 30% of assured energy, and the remaining energy would be commercialized by 3 environment contracts. The complex will be built in Rio Grande do Norte, which is a region Copel already knows. And we have other wind generation assets there, and that will allow us to have operating synergies with undertakings already in operation. And that is fully in line with our strategy to expand with synergies and also with capital allocation discipline. The estimated investment for this project is R$400M. And in 2020, it will start with a share of 10% at total installed capacities of an average of 90MW. This is a project that is relatively small. But I should say, this is a good example of the new era of Copel, with a strict discipline in capital allocation. And in this specific project with the return rate over to the EGF. Apart from projects, we’re still moving forward, looking for good investments that are profitable and sustainable.”

In essence, management recognizes that debt was the biggest factor which has held back Copel shares throughout the period of 2013 to 2018. Since late last year, the debt burden has been carefully managed, and 98% of the debt is in the domestic currency. They are now standing at 2.9 Debt/EBITDA, down from as high as 4.1 at the start of 2018. This reduction has coincided with most of the plant projects commencing operations in 2018 and 2019, which makes sense. Moreover, levered free cash flow on a TTM basis has most recently turned positive for the first time since the capex cycle began: 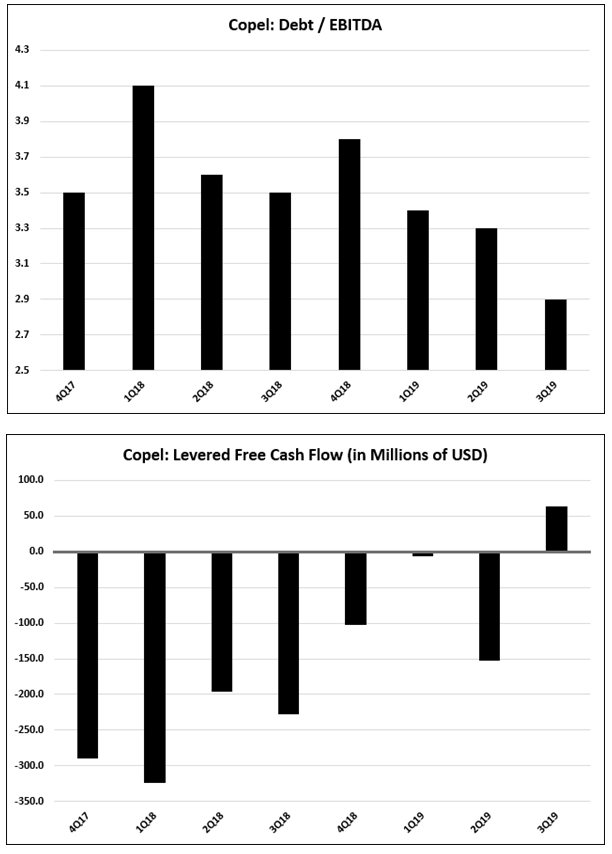 The company reported the following numbers in 3Q19, blowing EPS and revenue estimates out of the water:

Regarding the results, BAML’s Murilo Freiberger and Arthur Pereira had the following to say:

“Copel reported good and above estimates 3Q19 results, with adj EBITDA (ex-VNR) at R$928mn (vs R$680mn in 3Q18 and +21% vs BofAML estimates). Copel once again delivered an improving performance in the distribution segment, which came ahead regulatory levels by 3.5% (EBITDA LTM) despite uninspiring volumes (-1.2% YoY). In our view, the beat to BofAML estimates on 3Q19 results show the continuous improvements on company’s operations and good cost control…”

However, that still wasn’t enough to turn the analysts bullish as they kept their Neutral rating:

“While we surely welcome solid operational trends, we rather wait for more clarity regarding Copel’s long-term strategy before becoming more constructive on the investment thesis. We maintain our Neutral rating… Despite most-welcomed improvements in the distributor’s operations, we think further outperformance relies on more evidences of Copel’s capital discipline.”

My view is more in line with Goldman’s, who initiated Copel with a Buy on Nov 14th, citing “cost-cutting initiative to drive improving efficiency going forward.” I think continued reduction in debt covenants (with Net Debt/EBITDA now at 2.2 vs 3.1 in 2018) and the free cash flow’s recent inflection into positive territory is already proof of Copel’s commitment to discipline. In fact, one could argue that the company’s debt reduction plans were already well underway when shares bottomed in 4Q18 and Debt/EBITDA stopped rising. Therefore, unlike BAML, I think back then would have been the period to wait for a buy confirmation; not now. Essentially, it’s a situation where we’ve avoided buying a rumour too early, but we also don’t want to be buying a solidified fact. 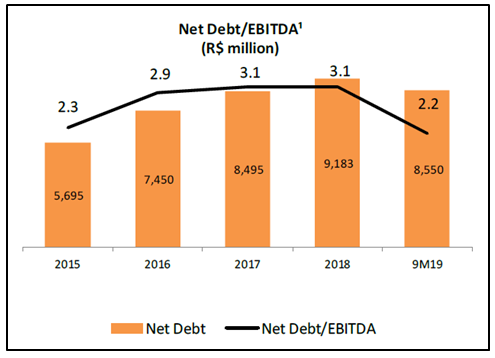 An important factor to keep in mind is that most of Copel’s energy will be sold on the spot market from 2020 onwards, due to state rules. The figure below shows a breakdown of the company’s future sales: 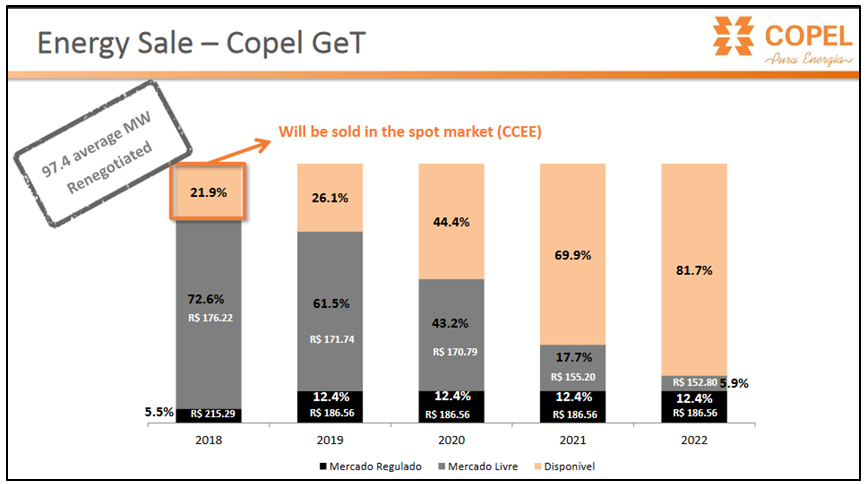 CEO Slaviero has talked about their recent efforts in reducing decontracted energy as a way to mitigate the effects of unpredictability:

“One of our actions since the beginning of the last quarter that is always in order to review the amount of energy, decontracted back-up power generation and transmission has and to run this project also in our commercialization company. So, we are looking for a reduction of the decontracted energy for the next few years, so that we can have more predictability and a greater assurance to the company as well as to our shareholders, avoiding, therefore, to be exposed to the oscillation of the spot price… And for 2020, we are already at our minimum needed, which is financial hedge lower than 15% in 2021, ’22, and ’23. It is around 50%, a little bit less in ’21 and a little bit more in ’22 and ’23. So, there is an effort of the company here towards that.”

Historically, spot prices have tended to be extremely volatile. However, the long-term average is in the ballpark of what Copel gets from the regulated and free markets (“Mercado Regulado” and “Mercado Livre” in the figure above). Thus, while we can expect a stable long-term price, there will be times when Copel will have to sell energy below R$100/MWh vs the historical average of ~R$150/MWh. Below is a graph of the spot price, with figures taken from the website of Câmara de Comercialização de Energia Elétrica (CCEE). Note that we are currently in a period where spot prices are headed upwards, partly helped by separate ongoing issues with reservoir storages at the Cantareira and Pimental dams: 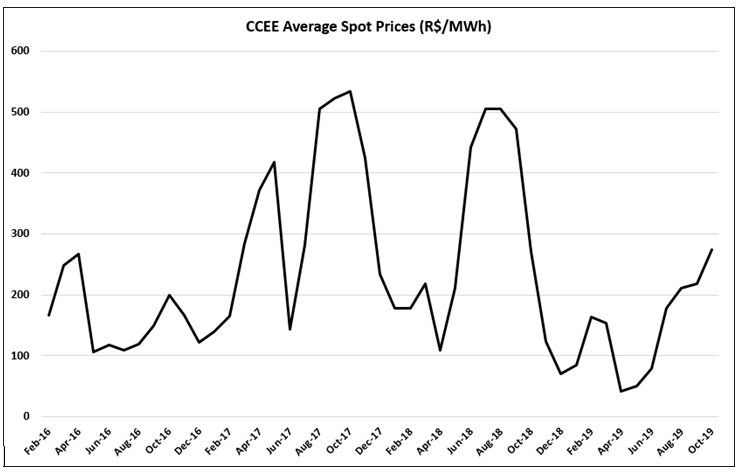 Apart from spot prices, Copel also has the renewal of their concession on their biggest plant in 2023 (refer to the 3rd image above) to be concerned about, although I suspect the market won’t worry about this too much perhaps until a couple of years down the road.

Lastly, it needs to be said that the company is shareholder-friendly and stable. Although the dividend yield has come down quite a bit due to debt management (as traders, we’re not actively seeking dividends anyway), pay-out ratios have managed to stay above 25% and there has been no dilution over the last 10 years. This is mainly because the state of Parana, who owns roughly 60% of shares, reportedly dislikes dilutions (especially when below book value). So while we anticipate free cash flows continuing to grow after recently turning positive, we also won’t have to worry about any negative surprises on this front. 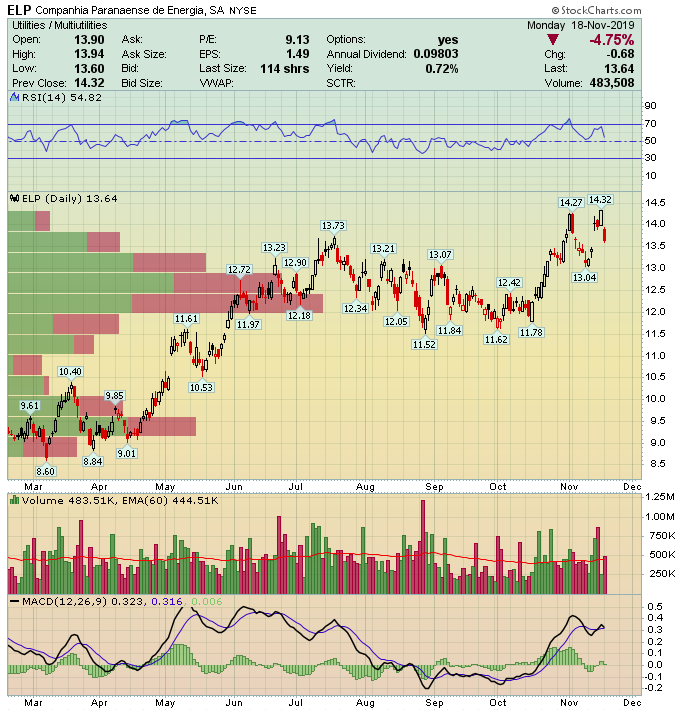