Monster Beverage (MNST) will be reporting its Q1 earnings on Thursday, May 5th after the close and RBC Capital is currently modeling EPS of $0.62 vs $0.61 estimate, Net Sales growth of +13.8%, which is in-line with consensus, with potential upside in the U.S. based on their channel checks.

According to IRI, Monster U.S. net sales increased +5.8% Y/Y in Q1, which would be below the +9.2% in Q4, which based on the historical spread over the past 8 quarters, should result in high-single-digits growth. RBC’s channel work suggests overall U.S. trends are stronger than in scanner data, with several bottlers citing low-double digit growth. “We note IRI data is not capturing strong growth in untracked channels (online, home improvement stores, club), where MNST is gaining share, as evidenced by strong January trends.”

Meanwhile, Stifel was out with a note on May 1st highlighting that Monster Green and Zero Ultra, the company’s two largest SKUs comprising 42% of U.S. sales, have accounted for 5pts of Monster’s 7% YTD U.S. sales growth. Additionally, Ultra Peachy Keen and Aussie Lemonade have added 4pts to U.S. sales since their mid-February introductions. “Collectively, we think this indicates end-demand for Monster’s core SKUs remains robust, while innovation is additive to growth.”

On the topic of aluminum prices, which is Monster’s largest input at 25% COGS, they are currently 10% below levels when the company reported its Q4 results in late-February, though still up 35% Y/Y. Stifel would add, “Extrapolating current levels, including the Midwest Premium, we now estimate aluminum will increase 29% Y/Y in 2022, compared to a 41% Y/Y increase at early April levels. Over the balance of 2022, we estimate aluminum to be 22% higher in 2Q22-4Q22, compared to 33% higher at early April rates. We continue to think Monster, and other industry participants, should increase prices to offset cost pressure rather than reduce promotional expenses, as has happened since Fall 2021, though we also do not anticipate industry or Monster-specific pricing to occur until Fall 2022 at the earliest.”

Other Topics of Conversation

M&A – While I doubt the company will be providing any specifics, it should be noted that a couple of months ago, Constellation Brands (STZ) and Monster were reportedly discussing a potential merger but the deal talks were moving slower than the original Bloomberg report implied, CNBC’s David Faber reported. It also remains unclear how Coca-Cola (KO), which owns a 19% stake in Monster, would view the potential tie-up.

Arbitration – Last month, Monster and orange-drink maker Orange Bang were awarded approximately $175M in damages from Vital Pharmaceuticals for violating “Bang” trademark rights. The arbiter found that Bang’s product could not be proven to be creatine-based, which was mandated in VPX’s settlement in question. In addition to damages, the arbiter awarded a 5% royalty on all future sales of Bang Energy and other Bang products (split between Monster and Orange Bang was not provided) unless Bang only markets and sells its products to niche venues such as gyms and grocery store vitamin aisles and stops using the Bang name altogether in 12 states. Evercore ISI analyst Robert Ottenstein estimates a potential 1-2% EPS tailwind for MNST from the royalty stream assuming the ruling holds (assuming 50/50 royalty split with Orange Bang). 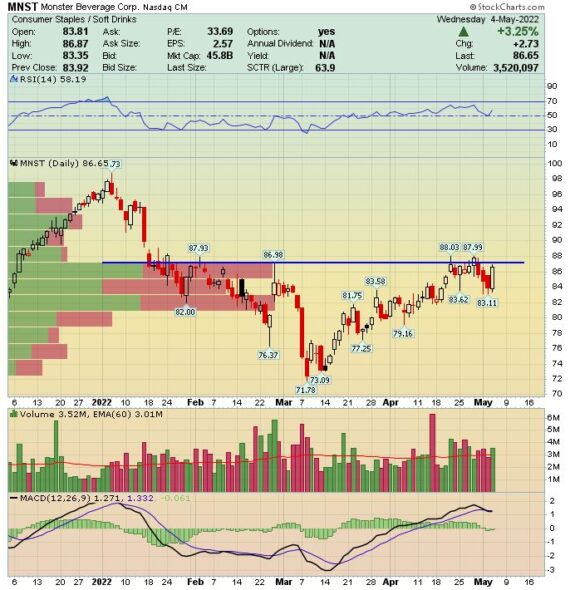