Other than earnings in the middle of February, what other events are on the horizon? In a couple of weeks down in Orlando, Florida, the 2023 ICR Conference will be taking place. While I don’t have the specific date yet, Crocs is listed as one of the companies presenting. It should also be noted that last year at the 2022 ICR Conference, Crocs pre-announced their Q4 numbers. Are we in for the same in 2023? We’ll have to wait and find out.

In the meantime, we can look back at last earnings and see that shares popped nearly 15% after a beat on both the top and bottom line. More specifically, EPS came in at $2.97 vs $2.61 estimate and Revenue came in at $985.1M vs $944.18M estimate. Consolidated revenues of $985M grew 63% on a constant currency basis.

By brand, the company said the Crocs brand saw North America revenues increase 1.8% to $445M while the North America DTC channel was up 13%. Turning to Asia, Crocs revenue grew 82.3% to $138M. The strong growth was broad based across India, Southeast Asia, Japan and South Korea. Additionally, management noted that the green shoots in China continued despite headwinds from the continued lockdowns with revenues increasing more than 30% compared to last year. Finally, Crocs brand revenues for EMEALA were $132M, growing 45.6% with distributors, brick and mortar wholesale partners and e-commerce driving the growth. Momentum continued from Q2 with strong growth in their top direct markets, the UK and Germany.

The other brand for this company, and the focal point of this write-up, is known as HEYDUDE. Back in December 2021, Crocs announced it was acquiring this privately-owned casual footwear company for $2.5B. In the most recent quarter, HEYDUDE brand revenues came in at $269M, representing revenue growth of 87% versus the prior year. With the addition of HEYDUDE, Crocs has now been able to better diversify their portfolio. For Q3, clog penetration was just over half of total revenues while the casual silhouettes of HEYDUDE diversified their overall revenue base to constitute 27% total revenues and sandals were approximately 9% of revenues.

With continued optimism, management announced that they now expect HEYDUDE revenues to exceed $1B in 2023, a full year earlier than previously committed.

Based on Piper Sandler’s recent “Fall Taking Stock with Teens Survey,” HEYDUDE ascended to the number seven favorite footwear brand among teens, up from number nine in the Spring of 2022.

CEO Andrew Rees commented, “We’re also seeing early evidence of success with our marketing campaigns, as the Piper study noted increased HEYDUDE mindshare in the Northeast and the South regions of the United States. We’re excited about the rebrand that went live in July. And we’ve seen consideration increase by 5 percentage points in our recent brand study.” 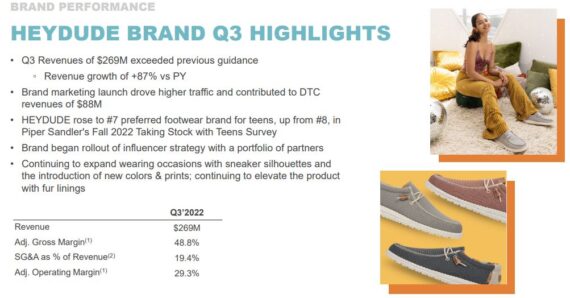 CEO Andrew Rees would say, “So I think it shows up differently from HEYDUDE, Sam, but in a way, yes. So I think personalization behavior is more around kind of SMUs and getting short run special product either for wholesale customers or for particular consumer segments that we want to target through our direct to consumer. So we will definitely make product and market it to discrete segments. There’s not a sensible vehicle to sort of put a divot on. We do think there’s opportunities with laces and things like that, but that’s a little bit down the road. And then I think the other way that we can create kind of short-term demand for specific styles within HEYDUDE is collaborations, right? And we will have a cadence of collaborations and an opportunity to use the HEYDUDE brand in that fashion over time. That will take a little time to work out.”

Sam Poser would also ask about expansion noting that he heard there’s new HEYDUDE stores that opened down South and was wondering what the company’s plans are there?

Management would say that for HEYDUDE, in the last six months since they’ve owned it, they’ve actually expanded distribution quite a lot already. “But there is clearly more to come in 2023 and beyond, and there is international on top of that plus is also share a shelf. Like the places where we’ve expanded distribution, we really have minimal shelf presence and we envisage a lot greater shelf presence for the brand in the future.”

“And then from a HEYDUDE perspective in terms of international, we’re going to sort of put our toe in the water next year with international. We think it’s an important part of the long-term growth trajectory for HEYDUDE. But we’re going to start with some presence in Europe. We’re going to focus on really two major countries, the UK and Germany. Those will be direct markets where we’ll go direct to two major brick and mortar wholesalers. And we will also start a number of major distributors out of our kind of European headquarters. So that’s really our toe in the water for international.”

CEO Andrew Rees would comment, “I think I talked a little bit about this maybe last quarter. As we look at — if you look at the HEYDUDE consumer, they clearly have Crocs in their closet, right? So there is definitely a customer overlap. But they are buying the shoes for a different purpose, right? They see the wearing occasions as distinct. So we don’t today see a lot of tradeoff between the brands and consumer purchasing. But the HEYDUDE customers do own Crocs. They have a higher share of their closet than the average consumer. As we look at where we think HEYDUDE is taking share from, because obviously it’s taking a lot of share in the marketplace, there are discrete brands that we can see that are clearly losing share. And then we also think that there is a little bit kind of in lower end athletic when you look at the $60 price point for sort of an athletic shoe, which is really just a casual shoe from the consumers’ perspective, we think we’re taking share of that. So yes, there is overlap but the consumer is purchasing for different wearing occasions.” 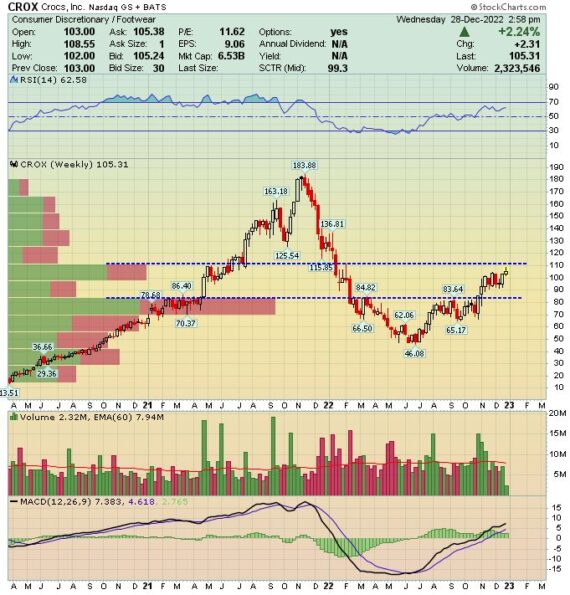