Macy’s (M) reported lower than expected sales for the last two months of 2016, sending shares 9% lower after market close on Wednesday. Similar to peers, CEO Terry J. Lundgren attributed Holiday season performance on changing shopping habits and behavior of their clientele. He further expanded this reasoning by referring to the double-digit gains shown at both of their digital outlets, macys.com and bloomingdales.com. Some bright spots were mentioned for in-store sales, those being active and cold-weather apparel, fine jewelry, also furniture and bedding. However, overall numbers were negatively impacted primarily by continued poor sales in watches and handbags.

Management expects these actions to result in yearly expense reductions of approximately $550 million as of 2017, of which $250 million is planned to be invested in further growing their online business segment, bluemercury luxury beauty and spa retail locations, Macy’s Backstage outlet stores as well as their Chinese joint-venture virtual store.

Following the press release, RBC revised their outlook by lowering their price target from $43 to $35. Notably, they point out that the tailwinds that contributed to Macy’s success in fending off market share loss to Amazon (AMZN) and off-price retailers over the past five years are now in downtrends challenging further growth, particularly watches and handbags. Macy’s is now considered in a precarious position led in part by reduced tourist spending and continued weakness in accessory brands such as  Kors (KORS) and Fossil (FOSL), and especially with Amazon pushing more aggressively into the apparel sector from which makes up Macy’s core customers. BAML likewise lowered their price target, from $45 to $38.

Similarly, Kohl’s (KSS) released disappointingly low Holiday sales figures and cut guidance. Despite stronger sales for Black Friday and the week leading up to Christmas, it could not make up for weaker receipts for November and December. Likewise with Macy’s management, Kohl’s indicated the decline stemming from accessories while home, footwear and men’s categories stood out as strong spots. Shares traded down 11.5% in extended post-market hours.

RBC also revised their price target for Kohl’s, reducing it from $48 to $42 and acknowledging the secular bear case that is affecting department stores is also likely to impede Kohl’s comp acceleration beyond 1%. With 90% of stores being in off-mall locations, off-price and Amazon are again expected to present headwinds in the coming years. A decline in operating margins is anticipated from 8.1% in 2015 to 7.2%.

Inevitably, Kohl’s could also plan on reducing retail locations and workforce as 50 leases come up for renewal for 2019.

On the positive side, the analyst is keeping a more optimistic outlook for 1H2017 when Kohl’s will face easier gross margin compares, could benefit from a new CFO with the current one departing in the spring, and lastly, the partnership with Under Armour (UA) which launches on March 1st could add $300 to $400 million to revenues in its first year.

L Brands (LB) following KSS and M this morning also with disappointing holiday same store sales and chart is setting up for breakdown. 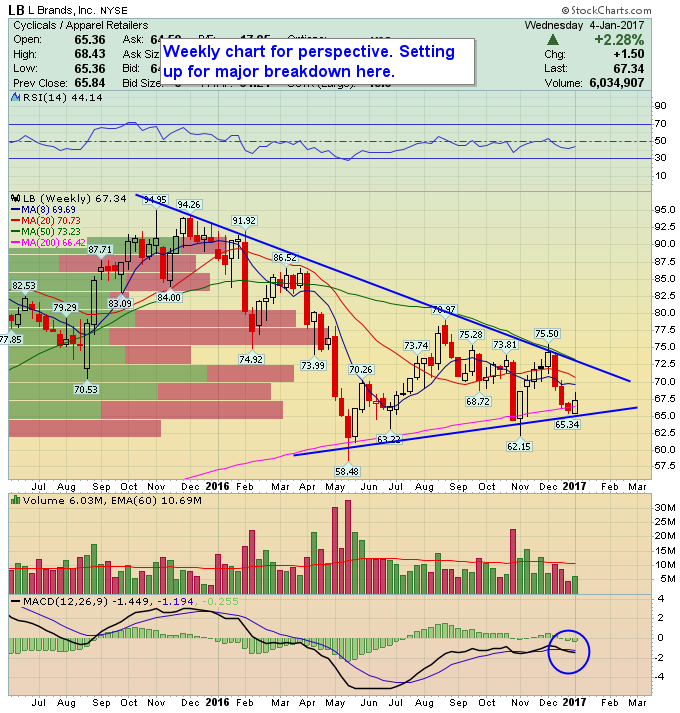