Deutsche Bank – On November 15th, analyst Paul Trussell upgraded DG to Buy while raising his price target for the shares to $93 from $79. Dollar General’s “long-term profit algorithm” will return in 2018, Trussell tells investors in a research note. He sees the company sustaining at least mid-2% comps over the long-term and finds the valuation attractive at current levels.

The analyst would go on to say that when looking at the best related industry data (shaded below and detailed in Figure 9), their correlation analysis supports their expectation for 3Q comp of 3.1% (if not higher), with U.S. retail sales specifically pointing to 3.0% or better.

MKM Partners – On November 20th, analyst Patrick McKeever raised his price target to $96 from $83 and kept his Buy rating ahead of earnings, saying both Dollar General and Dollar Tree (DLTR) saw significant comps improvement in the second quarter. McKeever expects more upside going into the holidays as a result of wage gains for the core dollar store customer. The analyst adds that he prefers Dollar General to Dollar Tree due to more attractive valuation as well as his view that its 2.5% SSS forecast may be conservative.

UBS – On December 4th, UBS analyst Michael Lasser reiterated his Buy rating and aised his price target on Dollar General to $99 from $85 as he views the top and bottom line growth prospects as attractive. The analyst believes margin pressures likely moderated in Q3 and sees the macro backdrop and management initiatives as helping support the company’s comps.

BAML – Back on November 3rd, analyst Robert Ohmes was out with Food Retailer note/video that said he would be a buyer of DG ahead of earnings. Specifically, he would say:

“In fact, we think both stocks (DG and DLTR) will post strong fundamentals over the next 3 quarters against easy comparisons and as they continue to benefit from what I call the “Revenge of the Everyday Low Price Leaders.”

Mr. Ohmes would go on to highlight two specific charts and provide his commentary: 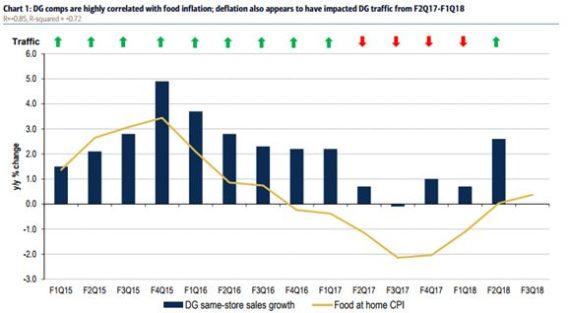 “Here’s what I want you to look at: The blue bars are Dollar General’s quarterly same-store sales. As you can see, they were trending nicely in 2015 and 2016 and then dropped off in fiscal 2Q17 and remained weak for 4 quarters.”

“Now the yellow line is the food at home consumer price index. You can see from the chart that Dollar General’s same-store sales slowed as food deflation set in. But what’s really interesting is that it wasn’t lower in-store prices at Dollar General that caused the sales slowdown. In fact, it was driven by a sudden slowdown in traffic same-store sales, which turned negative in the second quarter, and stayed that way until the most recent quarter, as you can see in the green up arrows turning into these downward pointing red arrows.”

“What’s interesting is that this period of heavy food deflation was led by the meat, poultry and seafood category, which we show in Chart 2. But what’s more interesting, is that Dollar General doesn’t even sell fresh meat, chicken or fish.”

So what happened here? BAML thinks the magnitude of the deflation in the proteins category, and deflation in some other key traffic driving categories like dairy and produce supported a highly promotional environment across the US food retail industry that diverted customer traffic and fill-in trips away from every day low price retailers like Dollar General for a period of time. 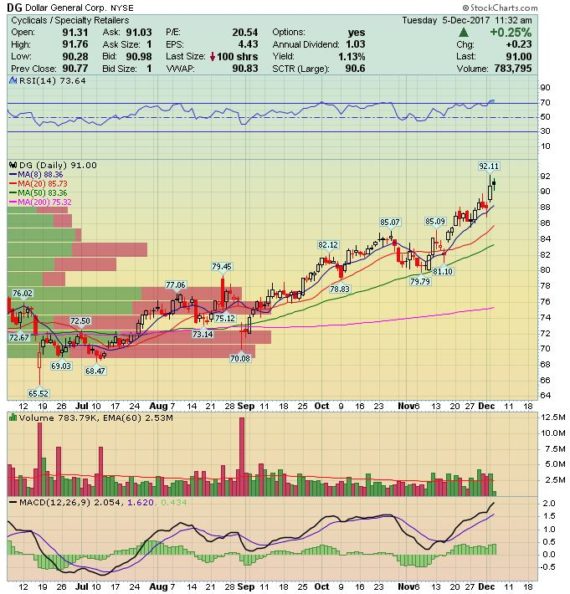