Ulta Beauty (ULTA) will be reporting its Q4 earnings today after the close and based on analyst commentary, the obvious consensus is that it is a favorite reopening play and could continue to catch a bid over the next couple of quarters.

In a note on February 28th, UBS Analyst Michael Lasser February 28th is modeling a comp decrease of 10%, which compares to the -11.8% consensus estimate and the -12% to -14% guidance. Transactions probably continued to be pressured as consumers remained hesitant to visit stores. This was likely partially offset by an increase in average ticket. The company noted it started Q4 with encouraging sales trends in November. UBS thinks trends accelerated from October as it started its holiday promotional slate early. Though, trends likely moderated as the quarter progressed with tougher holiday compares. They believe its in-store comp decline was partially offset by continued strength in eCommerce (it saw a 90% eCommerce comp increase in Q3). They note its peers reported strong online sales growth in C4Q’20 (Sally Beauty saw a 48% increase & Estee Lauder experienced a DD e-Commerce growth).

Also, Census Bureau Retail Sales for Cosmetics, Beauty Supplies, and Perfume Stores accelerated in Q4. Notably, Cosmetics, Beauty Supplies, and Perfume Stores decreased 11% for first two months corresponding with ULTA’s Q4. This represents an improvement from the -12.6% decrease in Q3. On a monthly cadence, November was down -12.6%, while December was down -9.8% (January data not yet available).

Meanwhile, JPMorgan analyst Christopher Horvers was out on March 8th raising his Q4 comp forecast to -8% from -13% based on their work and data checks. In 2021, they are currently modeling 27% SSS (22% per Consensus Metrix), $11.13 in EPS (vs. $10.50), and a 10.4% operating margin (vs. 10.5%). The number one inbound investor question on ULTA since the fall has been whether it can guide to a double digit operating margin (vs. 12.2% in 2019 and 4.4%e in 2020). Historically, ULTA guided more aggressively. However, the past two quarters have indicated a newfound penchant for being conservative, which makes sense given the environment and comes on the heels of a wide range of guidance types that range from highly explicit and to quite nebulous and flat out below the Street. Hence, while JPMorgan expects an annual framework, it is unclear to unlikely that ULTA explicitly endorses a DD operating margin (and they believe most investors expect that to be the case).

Skincare – From a category standpoint, Oppenheimer was out with a note recently highlighting that Skincare has represented a bright spot in beauty in recent quarters and has remained resilient even during the pandemic. As they highlight in Exhibit 10, ULTA’s skincare, bath & fragrance category has outperformed its other categories. In recent quarters, ULTA has been increasingly focused on driving growth in skincare, including expanding its assortment and allocating more space to the category (See Exhibit 12). “We believe ULTA’s stepped up efforts in skincare could suggest a stronger base business post pandemic.” 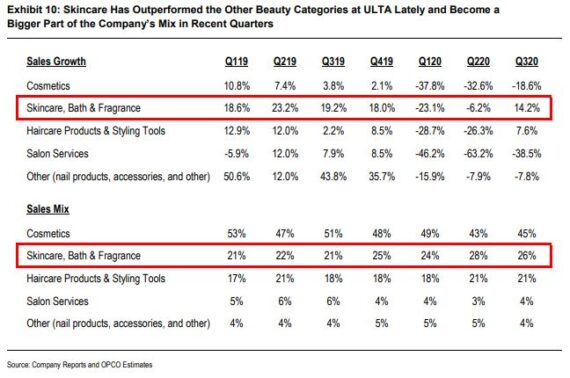 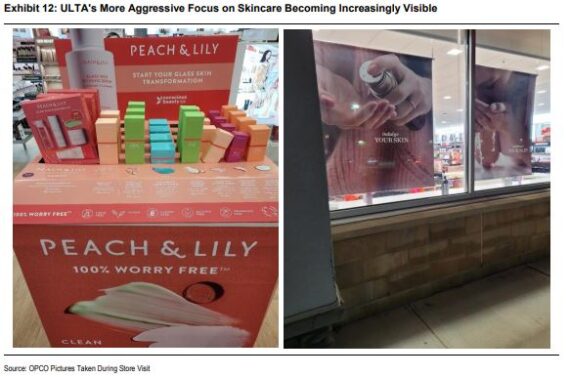 Target Partnership – Finally, another area on the earnings call that investors will want to pay attention to is any commentary surround the company’s partnership with Target. For those that do not know, back in November, the company announced a “shop-in-shop” concept with Target. Now, in a note to clients on March 3rd, Oppenheimer analyst Rupesh Parikh would highlight that Kohl’s recently revealed the initial 200 locations that will be receiving the Sephora store-within-store concept. In the note, the analyst completed a proprietary mapping analysis comparing expected KSS locations with Sephora inside to ULTA to better understand the store overlap. “Consistent with our initial expectations, our analysis suggests a meaningful overlap with ULTA locations. We continue to view this partnership as more of a negative for ULTA given the strength of the KSS enterprise vs. J.C. Penney. We await to see the in-store rollout and interplay with the ULTA and TGT partnership.”

Now, at this point, they have not assumed any royalty contributions from the ULTA/TGT partnership in their model so any benefit from the partnership would lend upside to current forecasts. 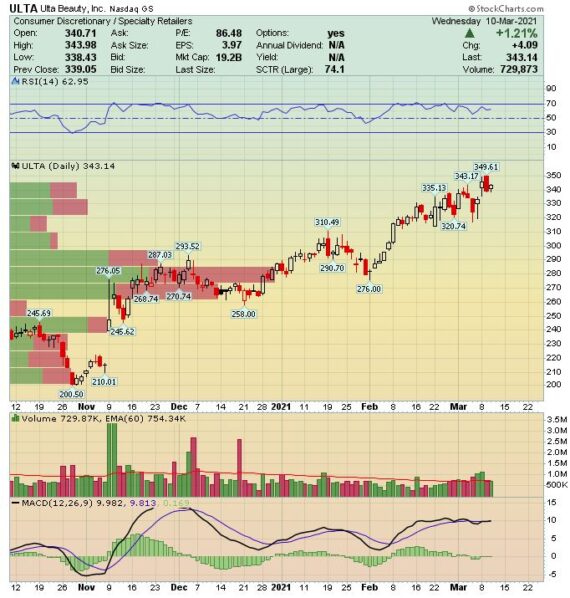