According to the company’s recent Investor Deck, CEO Grant Johnson founded the company in 2014 after attending a StarCraft championship and recognized the gambling potential in esports. The company, which came public last year, focuses on esports entertainment, esports wagering, and iGaming. Let’s take a look at each of these segments:

This segment, as you can probably guess, includes online and in person leagues and tournaments for gamers.

Noble Capital, in their initiation note, highlights that revenue per esports viewer is lower than other sports, but growing. What esports lacks in revenue per viewer, makes up for with a larger viewer base. Notably, lower revenue per viewer is a reflection of the relatively young industry and traditional advertisers are just now moving into its direction. Advertisers of traditional sports will allocate more resources to attract this largely unreached market. Esports fans skew heavily male and are 18 to 34 in age, representing 32% of the fan base, with 23% of fans age 35 to 44. Marketers have long advertised on traditional sports, like football, golf, racing and baseball, to reach the male demographic. A March 2020 Morning Consult survey found that only 34% of esports fans are fans of traditional sports.

According to Noble Capital, industry sources estimate that esports advertising would reach $196M in 2020. The total includes advertising and sponsorships from organized esports competitions on digital platforms. This estimate excludes revenues from esports competitions on linear TV, merchandise and ticket sales, as well as ads within the games. As the following chart illustrates, looking out to 2021, advertising revenue is expected to increase 15% to $226M. 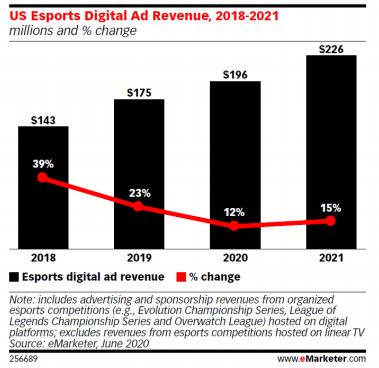 Switching back to GMBL, one thing that immediately stands out pertaining to this segment is the number of partnerships and acquisitions it has done. Here is a list:

-Partnered with esports brand, Dignitas, which is owned by Harris Blitzer Sports and Entertainment. HBSE is the owner of leading global brands and sports properties including the Philadelphia 76ers, the New Jersey Devils and the Prudential Center in Newark, New Jersey.

-In August 2020, it partnered with Allied eSports.

-The company announced an agreement with AEG, a leading sports and live entertainment company, to become the official esports tournament provider for the LA Kings of the National Hockey League and LA Galaxy of Major League Soccer.

-The company recently announced the most transformative acquisition of its young history, according to Noble Capital analyst Michael Kupinski, with plans to purchase Helix eSports and ggCircuit for $43M. Management indicated on this week’s earnings call that the acquisition is expected to close in early Q2.

Helix eSports has state of the art esports centers that allow gamers to compete on modern, high end gaming equipment. The company currently has two locations, with additional locations coming soon. The average cost of the facility is $500,000 and are expected to be profitable within 18 months.

In addition to the esports facilities, the company will own ggCircuit, a cloud-based management system, tournament platform, and point of sale solution for enterprise customers. Notably, the ggCircuit network has more than 1,000 locations, with clients ranging from Dell, Best Buy, and Lenovo. The acquisition also includes Genji Analytics, an analytics and scouting information company, as well as LANduel, a player versus player wagering platform. Noble Capital added, “We believe that these platforms provide relationships that may cross pollinate to its other business lines and attractive opportunities for growth.” 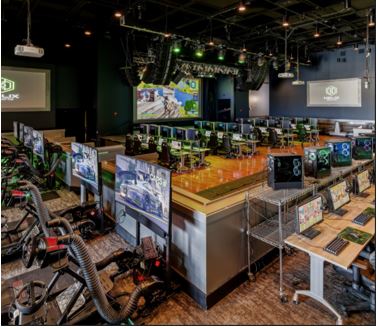 That last comment from Noble leads me into the company’s esports wagering business, where it offers a platform for esports betting called VIE.GG.

The company, in an effort to grow this business, is developing its esports wagering business internationally and attempting to obtain licenses in the United States. On August 20, 2020, the company entered into a multi-year partnership with Twin River Worldwide Holdings, now known as Bally’s (BALY) to launch VIE.GG in the state of New Jersey.

Earlier this week, on the company’s Q2 conference call, management said, “We plan to launch our VIE platform in New Jersey this spring, early April. After that rollout, we explore market access for expansion into additional U.S. states. We also look forward to working with proposed new regulatory framework in Canada as provinces there begin to offer single-event sports wagering in the near future.”

In July 2020, the company bought AHG Entertainment, which included Argyll Entertainment and Nevada Holdings. This allowed the company to enter the sports betting market for sportsbook and casino. Noble Capital believes that the acquisition was designed to cross pollinate its esports wagering business with traditional gambling in markets that provide jurisdiction approval. AHG is licensed and regulated by the UK Gambling Commission and the Irish Revenue Commissions to operate an online sportsbook and casino sites in the United Kingdom and Ireland. The Argyll flagship sites include www.SportNation.bet and two white label brands including www.RedZone.bet and www.uk.Fansbet.com.

In Q2, the company said it delivered $2.4M of revenue, principally from their flagship SportNation.bet brand in the U.K. This represented a $2.1M increase over the prior quarter, which was materially impacted by their decision to [cross] marketing spend whilst they integrated a new customer affordability tool into their platform.

During the past quarter, GMBL also announced the acquisition of Lucky Dino, an established Malta licensed online casino operator with its own proprietary casino software platform. “In addition to further strengthening our tech stack, what the Lucky Dino asset gives us is a substantial foothold in multiple new jurisdictions across Europe and Scandinavia, where esports are extremely popular.”

CEO Grant Johnson added, “The Lucky Dino transaction is a great blueprint for our strategy of acquiring profitable iGaming operators that provide us with strategic licenses, pools and players that we can efficiently cross-sell our other offerings into. We expect this transaction to close prior to the end of this month, February.” 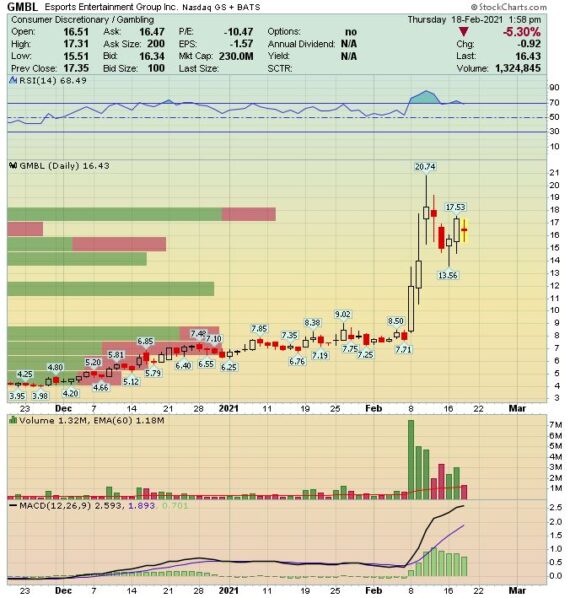