Everi Holdings (EVRI) provides gaming equipment and technology solutions to the casino gaming industry. They operate through two segments: Games (53% of Revenue) and FinTech (47% of Revenue).

Per their recent investor presentation, the company generates revenues: 1) From sales of gaming machines to commercial and tribal casino operators, 2) In gaming operations through placement of recurring revenue gaming machines on casino floors, as the operator of New York State’s video lottery terminal central system and from digital iGaming, and 3) Gaming other, which primarily includes operating the TournEvent of Champions®, the gaming industry’s largest annual slot tournament.

To kick things off, on January 26th, the company pre-announced Q4 results where they said that net revenues came in between $117-121M, which was ahead of analyst estimates at $112M, and up +4-8% Q/Q. The company’s “geographically diversified revenue mix likely helped mitigate the impact from select state re-closures and restrictions.” We will await further developments when the company reports its full results early next month (date not confirmed).

Then, in yesterday’s session, we started to see a pickup in call activity, ranging from the February 15 Calls, March 17.5 Calls, and finally the June 15 Calls where 2,000 contracts were bought for up to $2.30 offer side, approximately a $460,000 bullish bet that is now reflected in open interest. 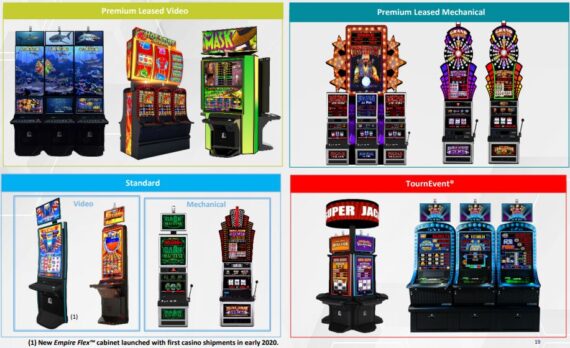 Even though the company pre-announced last week, we have gotten additional channel checks. Specifically, this past Sunday, Stifel was out with a note highlighting that Eilers-Fantini recently published their Q4 slot survey. For those that do not know, the Ellers-Fantini Slot Survey is the leading quarterly survey for slot manufacturers. The Q4 report surveyed 150 gaming operators (131 across U.S. & Canada), capturing an estimated 35% of total U.S. & Canada slot machines. Overall, the data showed market-wide slot shipments trending potentially better than expected. Stifel added:

“The survey noted participants expect to replace 5.9% of owned units over the next twelve months, a sequential improvement above the 5.3% reported in the Q3 survey. While still meaningfully below pre-COVID purchasing levels, we think this is an encouraging data point nonetheless and could show operators are open to deploying some capital as the outlook/timeline into a vaccine-led recovery improves. However, we continue to expect any meaningful inflection in slot replacement rates will likely come towards the back-half of 2021, though we think this risk is well understood by investors at this point and believe Consensus estimates are appropriately measured in the near term.”

Those were your high-level checks on the industry. But what does survey show for EVRI? Stifel says that survey results imply EVRI shipped 660-720 units during Q4, +27-39% ahead of Consensus and +32-44% ahead of their model. Participants expect to allocate 10% of NTM shipments to EVRI, the highest level ever recorded and in-line with management’s long-term aspirational ship share goal. The survey suggests EVRI added +106 net new units to their install base during the quarter, vs. Stifel’s +50 units estimate and Street’s +11 units. Survey results are encouraging, and they think underscore the strong operating momentum underpinning their high conviction in the stock. “Specifically, 10% expected NTM ship share is highly impressive, and we believe suggests EVRI could be a share winner as the market recovery plays out.”

Finally, back on January 6th, in a Gaming & Leisure 2021 Outlook note, Stifel analyst Steven Wieczynski highlighted Everi’s other segment: FinTech and how they see a compelling and somewhat misunderstood cashless gaming growth opportunity. While still early, initial market share indicators are encouraging with EVRI announcing installations of their mobile wallet solution at the WinStar World Casino and Resort and Seminole Hard Rock Hotel & Casino, as well as a rollout to other Seminole locations, including Hard Rock Tampa, in Q1:2021. These are among the largest and most profitable casinos in the U.S., which we think speaks to the merits of EVRI’s mobile wallet solution, which is fully integrated with EVRI’s broader FinTech capabilities (player loyalty, compliance, etc.) and compatible with various slot systems. Feedback from initial installations is largely favorable, and believe the prior market forecast framework, by which they estimated a $20-200M revenue opportunity is still reasonable, if not potentially conservative. “We expect to hear more on this on the Q4 earnings call.”

Thus, Stifel believes the market has yet to ascribe any material credit for the long-term growth opportunity for cashless gaming at these levels. 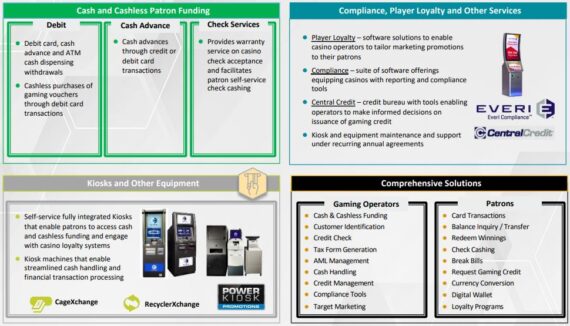 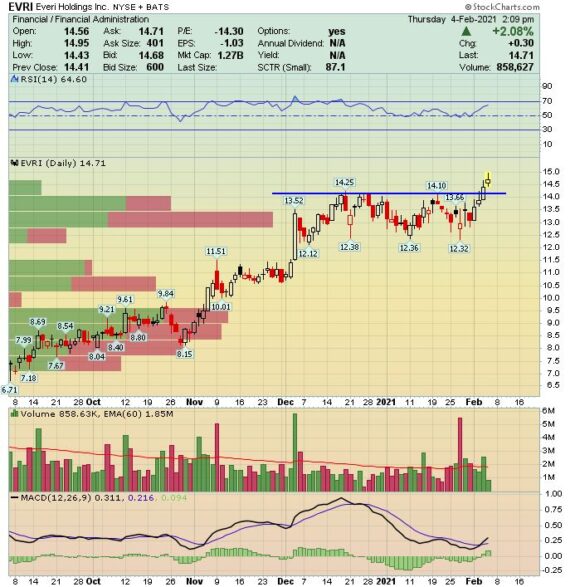