Following a client question in yesterday’s JaguarLive session, I wanted to provide a quick update on one of our favorite pet stocks. The bulk of this update will be focused on commentary at the ICR Conference last month. But, before commenting on that, Stifel was out with a note recently highlighting that recent data collected by the analyst as well as from company reports showed that Freshpet’s growth in scanner data tracked channels, which represent approximately 80% of total sales, has accelerated, with approximately 32% growth in the most recent 4-week period, excluding the discontinued baked product. Sales growth has largely been driven by velocity gains, with growth for dollar per store selling in tracked channels increasing 13%, or a 30bps sequential acceleration on a two-year basis. In addition, Freshpet outgrew the category in all classes of trade (9% growth in pet specialty, 34% growth in grocery, and 31% growth in mass), with accelerations on a two-year basis for all channels except for Pet Specialty.

At the ICR Conference in Orlando, Florida last month, Freshpet was one of many consumer/retail stocks presenting to analysts, private equity, and institutional investors.

JPMorgan analyst Ken Goldman would raise his price target to $72 from $62 saying that management’s optimism about revenue growth was as strong as they have ever seen, with terms such as “once-in-a-lifetime opportunity” being used. “FRPT remains arguably the best fundamental story in our coverage universe. Our model may be conservative: note that the company believes sales can potentially exceed $500MM by 2022 (our model calls for only $460MM) and $1B by 2025 (we model under $700MM).”

Credit Suisse analyst Robert Moskow would raise his price target to $68 from $58 highlighting a “Blockbuster 4Q.” More specifically, management said that its ACV distribution grew 6.7% points to 52.3% in Q4 as the company added 791 new stores. It finished the year with 2,071 new stores on a net basis, well ahead of its target of 1,500—1,600. The company also increased its depth of distribution by upgrading 249 fridges and introducing 29 “double-chillers.” Retail consumption is growing at a 27% pace with velocity up 11%.

Advertising – The company indicated it plans on investing more heavily in advertising in 2020 than originally planned. In the U.S., ad spending will be modestly higher than projected to drive awareness and growth, while the company continues to make significant ad investments internationally to stimulate expanded distribution. 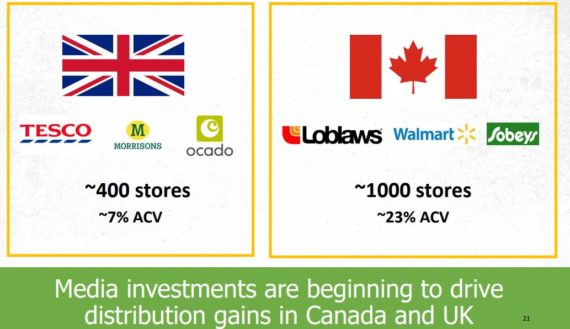 Bags – Stifel would highlight that management noted that its adjusted gross margin is expected to be slightly lower than previously anticipated due to a mix shift towards bags. “Small Dog has been the most significant growth driver, and that shift to bags reduces the gross margin percentage but improves gross margin dollars per pound. In addition, the specialized production line for small piece size products for small dogs and cats is margin dilutive in the near-term, but will increase capacity and long-term efficiency.” 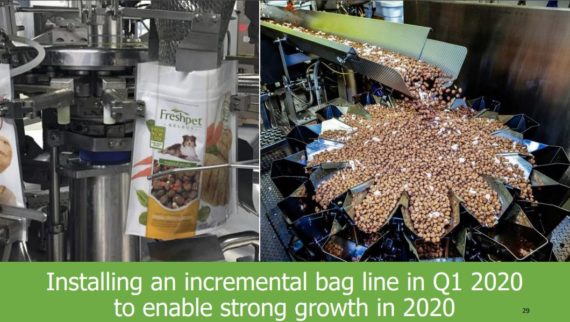 Construction – Finally, Freshpet reaffirmed its F2019 net sales guidance of >$244M and adjusted EBITDA of >$29M. They added that the Kitchens 2.0 construction remains on track and management expected to be under roof in late January/early February. The company also remains on track to acquire land for its Midwest Capacity Expansion in F1Q20, with further details regarding the site location, timing, and preliminary costs to be announced at its February Investor Day (Date not Confirmed). 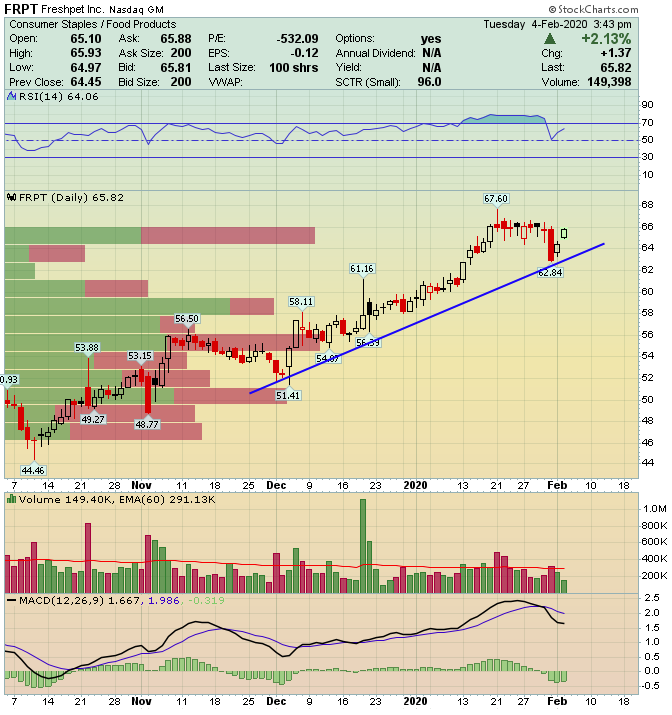