San Diego-based Gossamer Bio (GOSS) is a clinical stage biopharma with four pipeline candidates in development that currently target seven indications. The company was founded in 2015 and completed its IPO in February 2019.

Gossamer has four candidates undergoing clinical testing and evaluation. Of those, three studies will have data releases in 1H2020:

Gossamer’s main targeted indication is moderate-to-severe eosinophilic asthma for which interim Phase II data is expected in 2Q2020. The results will determine if evaluations will need to wait for topline readouts that will be gathered from all the patients and released in 2H2020, or move on to a Phase III trial if sufficient information is present.

GB001 is an oral, once-a-day DP2 antagonist treatment designed to block the underlying mechanism of asthma. The intent of this administration route is to fill the gap between conventional therapies that are either inhaled corticosteroids or injected long-acting beta-agonists and biologics. The focus is on patients with high level of eosinophils (a variety of white blood cells and one of the immune system components).

To date, Gossamer itself hasn’t produced results for GB001 as it is a pipeline addition that was obtained through the acquisition of Pulmagen Therapeutics which had initiated earlier studies of the therapy. Separately, Tokyo-based Teijin Pharma had previously conducted a small, 158-patient study that met its 4-week primary endpoint measuring peak exploratory flow from baseline evaluating lung volume, tested in the morning. Teijin also has exclusive rights to market GB001 in Japan.

Patients dosed 5mg of GB001 showed 53% greater results than placebo-control group, while the 20mg dose GB001 recipients showed 58% greater volume, along with 71% reduction of asthma worsening risk. Although the lower, 5mg dose did not show statistically significant effect versus the placebo-control group, it did demonstrate a clear, dose-dependent response to the therapy.

In the high eosinophils patient group, there was an 84% reduction in the risk of asthma worsening for patients receiving the 20mg dose, and compared to the placebo group, GB001 recipients scored a statistically significant improvement in Forced Expiratory Volume (FEV1) capacity.

There have been other pharmaceutical companies that have studied DP2 potential trials previously, the latest of which was Novartis (NVS) that conducted trials with fevipiprant, another DP2 antagonist.

Back in late-December 2019, it was announced that pooled analysis from their LUSTER 1 & 2 Phase III trials had not met statistical reduction compared to placebo over a 52-week period for any dosage levels. Consequently, Novartis decided to discontinue further development of the therapy. While the news did not affect their own stock price due to their sizable portfolio, Gossamer’s shares declined by 40% following the news release and, as of yet, have not regained their precious levels.

Although the news was certainly not supportive, there are some differences between the two companies’ treatments and some analysts are of the opinion that GB001 is a superior DP2 antagonist.  Furthermore, while Novartis’ primary endpoint did miss its goal, it did post a 33% reduction in the rate of moderate-to-severe asthma aggravations in the high eosinophil patient population, a group that GB001 had shown success with from Teijin’s higher dose administration. As well, key opinion leaders have noted that a 30%+ reduction is “clinically meaningful” and this could bode well for Gossamer as GB001 is 2.5x-5x more potent than fevipiprant, with a slower observed dissociation rate.

GB002 is administered by inhalation, in dry powder form. This method delivers the dose into deep lung location which is where the disease lies, potentially increasing lung exposure ratio and improving efficacy of the drug.

A different formulation was tested by Novartis which established mechanistic proof of concept, although ultimately Gleevec’s Phase III trials led to serious adverse events in patients leading to high discontinuation rates. However, Novartis did observe improvements in walking distance compared to placebo, and also registered 33% reduction in pulmonary vascular resistance relative to placebo-treated patients which, together, suggest that imatrinib resulted in improved blood flow and exercise capacity, both of which are meaningful to patients according to key opinion leaders.

GB002 is anticipated to achieve similar improvements in trials while achieving safety and tolerability requirements to be considered for regulatory approval. In non-human testing, GB002 demonstrated greater efficacy that Novartis’ imatrinib and also was able to restore BMP2 gene expression. 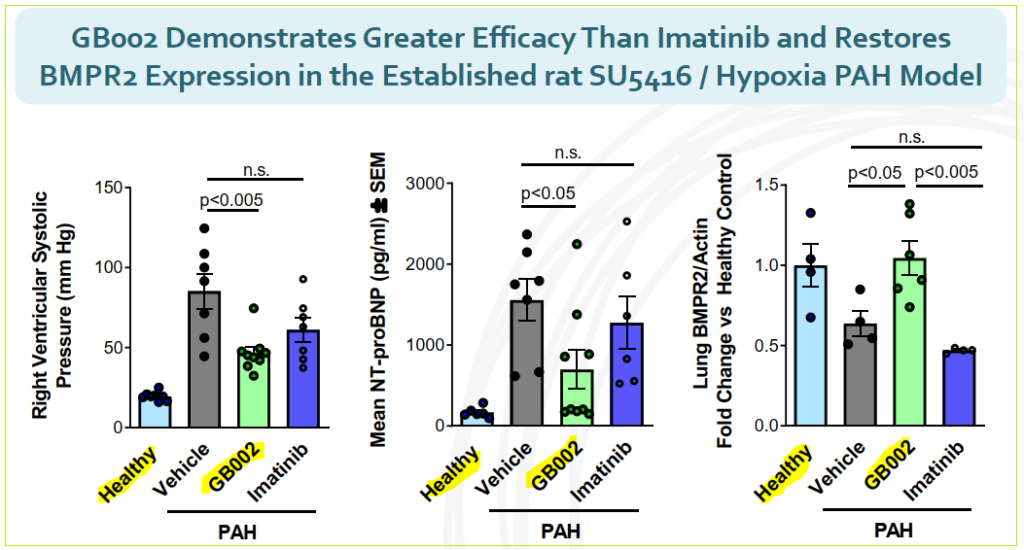 Gossamer’s third product candidate with upcoming data release is for inflammatory bowel disease (IBD) conditions, including ulcerative colitis (UC) and Crohn’s disease (CD). Result for Phase Ib trials are expected ‘imminently’, likely prior to the two others discussed above.

GB004 has a differentiated mechanism of action which key opinion leaders believe could have the potential to be used as monotherapy, or in combination with existing treatments on the market today. To date, preclinical evidence has shown GB004 promotes gut healing in colitis in mice and the evaluations have since moved to human subjects for a study that will assess the safety and pharmacokinetic profile of high and low doses, as determined from a completed Phase Ia trial.

Altogether these trials could set a positive tone for Gossamer going forward, especially if GB001 results are supportive of further phases. There are three readouts already expected in 2H2020, two in Phase II and one in Phase I. At this time management hasn’t indicated whether COVID19 related issues have caused disruptions in testing or recruitment, we are likely to get an update during their 2Q earnings conference call on May 12th. 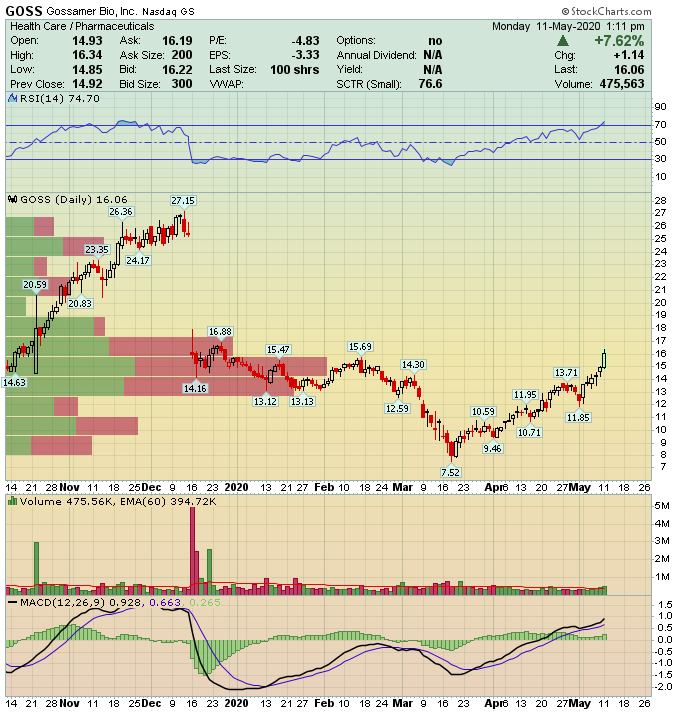