Headquartered in Houston Texas, Group 1 Automotive (GPI) retails new and used vehicles primarily in metropolitan areas of the US. As with other dealerships, it also arranges related vehicle financing, service and insurance contracts along with automotive maintenance and repair services.

Group 1 owns and operates 240 franchises at 180 dealership locations and 49 collision centers. Most of its US operations are in southern states with the highest concentration in Texas, namely 17 in Houston – 50% of all sales are also in The Lone Star State.

The company’s new car sales account for 55% of total revenue while used vehicle sales account for 32%, the rest is derived from services and parts. In 2018 (latest full-year data available), used car segment increased by 10.5% while new car segment was flat showing a shift in consumer spending as the retail price of new cars continued to increase: in January 2020 the average light vehicle cost $37,851, up 3.5% year-over-year.

It is unusual to see options activity in Group 1, early this week though there was bull risk reversal trade initiated with the following structure:

This is likely targeting the company’s 2Q20 earnings due to be released on July 30th before the market opens. 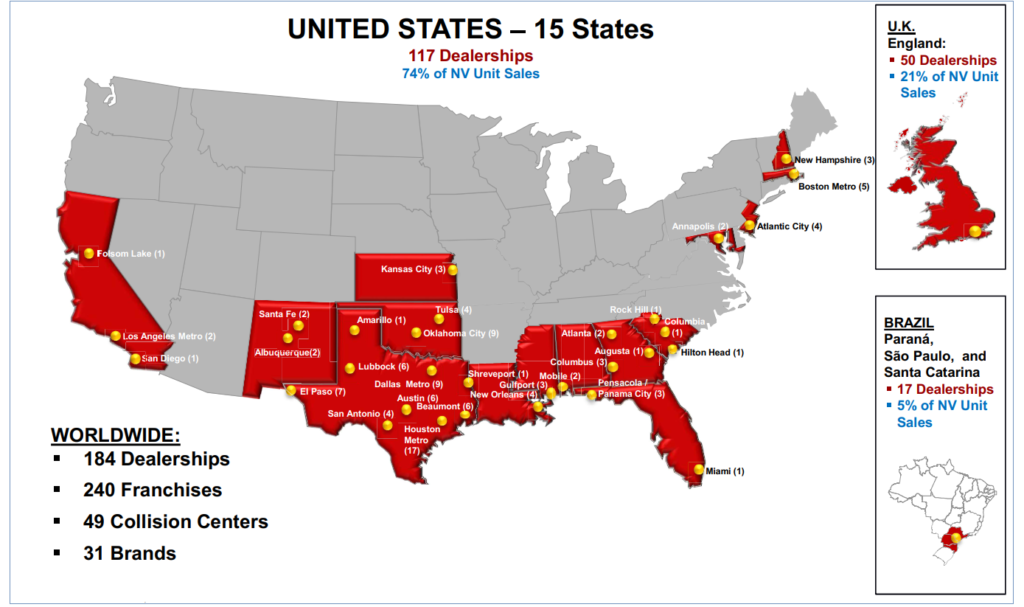 One June 25th management provided an operational update for the quarter noting “significantly improving market conditions” in May, and also in June leading to the report date. At that point, nearly all US retail operations had been open since early May and there have not been any new closure announcements since. In addition it was said that “revenues for new vehicle sales and service have increased at a much faster rate than associated costs”, resulting in faster U.S. operating profit improvement.

UK operations were re-opened on June 1st after a near 6-week shutdown, preceded by service departments that opened in mid-May. Management expects to see a profit for June as used vehicle sales and overall service had already improved faster than anticipated.

Brazil operations remain challenged though by the end of June all dealerships had re-opened.

After a rather drastic drop in April, Manheim Used Vehicle Index has now recovered and actually posted a new all-time high in June. In March, pre-lockdown era, the Index was trending in the 139-143 range, followed by a drop to 125.8 in April. The ensuing swift recovery has resulted in a 149.3 print as demand for used cars has been very strong, most likely associated with reluctance to travel by public transport and also with domestic travel being prevalent in a time when international flights and entry permissions are restricted if not outright denied. 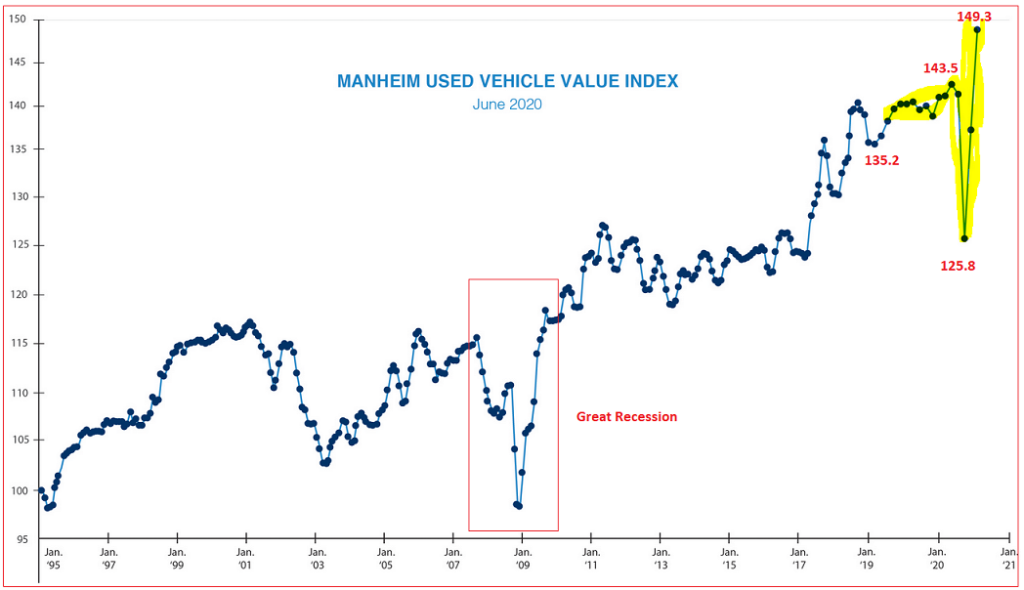 Weekly auction figures as reported by the National Automobile Dealers Association (NADA) (also referred to as JD Power) have shown sales for vehicle models 2012 or newer having regained the 100,000+ mark in early June after declining to just 18,000 in April. The latest period still held the 100,000 level although it was shortened by Independence Day holiday. 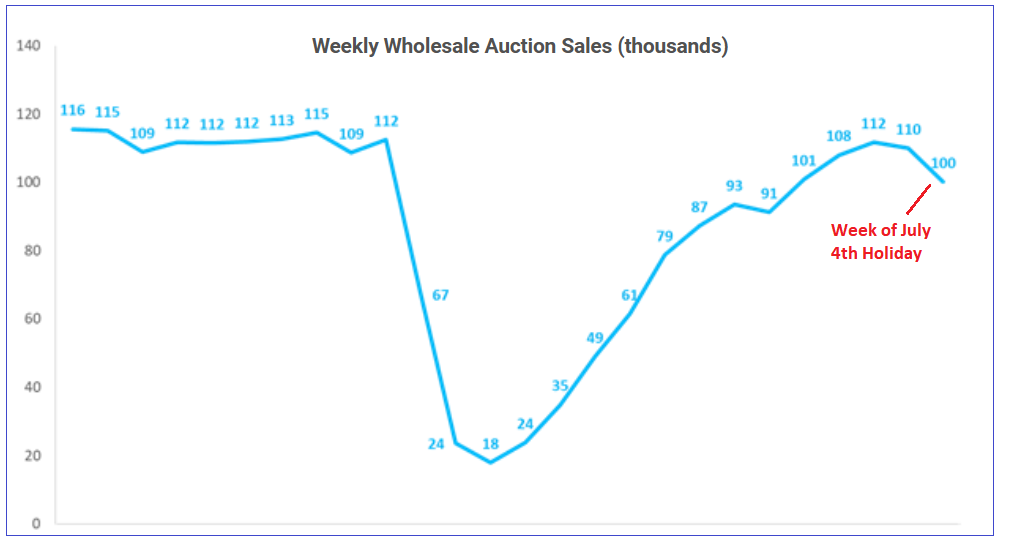 Weekly wholesale prices have continued to improve, recording 11 consecutive weeks of index increases out of April’s lows that reached 84.8. For the week ending July 5th the price index recorded 108.4 which is above what was forecast for the year, pre-COVID19.

The data is supportive not just for Group 1 but also to its peers which  include Penske Auto Group (PAG), Sonic Automotive (SAH), Autonation (AN) and Carvana (CVNA), to name a few. 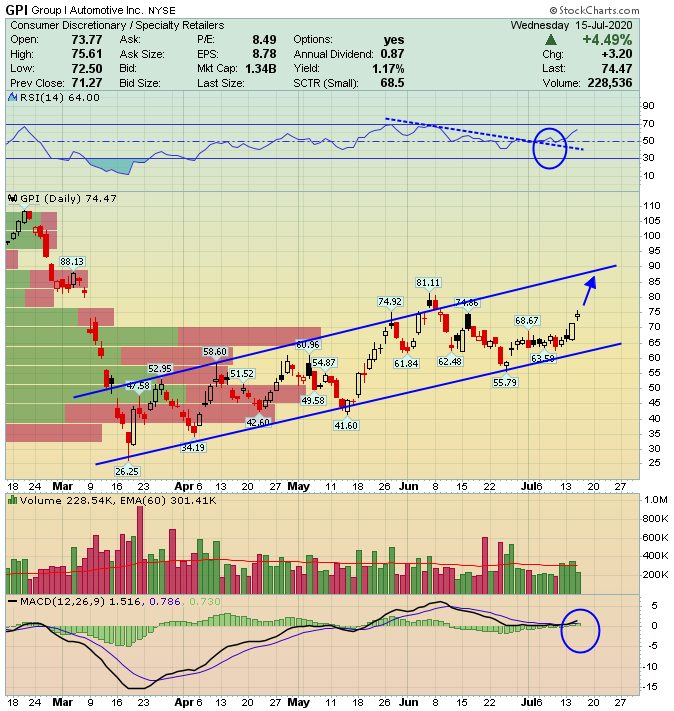