From February 18th – February 21st, new trends descended upon the Toy Fair in New York City with many high-level companies showing off their future toys and gadgets. One of these companies was Pawtucket-based Hasbro (HAS).

After earnings, the following sell-side actions were taken:

It should also be evident, based on the below figures, that Hasbro has been the clear and dominant toy maker for some time now.

Getting back to the Toy Fair event, Hasbro held an Investor Presentation where it provided business updates along with a preview of the company’s product lineup for 2017 and beyond. Here were some of the takeaways coupled with management and sell-side commentary:

– Star Wars: The Last Jedi is scheduled to hit theaters on December 15th. Management thinks performance (toy sales) should be similar to 2015 and 2016 (approaching $500 million).

– Spider-Man: Spider-Man Homecoming will be released on July 7th. According to Stifel, they thought management was particularly upbeat on the prospects for this toy line.

– Noticeably absent from the 2017-’18 line-up was a Frozen sequel, although this December, Disney will launch a new animated short on ABC entitled Olaf’s Frozen Adventure. In addition, Beauty and the Beast (live action) will debut in theaters next month.

– Nerf: Management suggested Nerf has seen $320 million in incremental sales since 2011 ($410 million; implies ’16 = $730 million) and is on its way to becoming Hasbro’s first billion dollar brand. In addition, the company is entering the $3.5 billion vehicle category with a line called NERF Nitro.

– Transformers: There is a lot of depth of content that’s planned in support of this franchise, including 3 major motion pictures with Paramount (2017-’19), content on YouTube (Transformers Rescue Bots), mobile games with Backflip Studios, and Kabam (Transformers: Forged to Fight), more short-form/episodic content with Machinima (Prime Wars Trilogy, Titans Return), and the 3rd season of Transformers: Robots in Disguise (on Cartoon Network)

– Magic the Gathering: 2016 marked the 8th consecutive year of growth for this brand and management seems confident ’17 will be the 9th, while the company continues to make investments in its digital initiative here (called Magic Digital).

The global gaming market is currently $100B and projected to grow to $119B through 2019. As Stifel put it, “We’ve probably not been appreciative enough on how Hasbro has embraced the concept of, “making games famous” through social media/digital marketing/audience expansion.” Pie Face Game has generated over 1 billion views to date! Other examples include Pie Face Showdown! (110 million views on Facebook), Speak Out (44 million views), and Monopoly Token Madness (2.2 billion impressions).

The company went on to reveal several new games at the Toy Fair including Pie Face Sky High!, Speak Out Kids vs. Parents, Toilet Trouble, Fantastic Gymnastics Game, and Egged On.

According to Hasbro, its new brand, Hanazuki, which was launched through digital episodic shorts, in a little more than a month has generated 55 million+ views on YouTube, while Mattel’s “You Can Be Anything” Barbie television ad has 50 million views life-to-date. 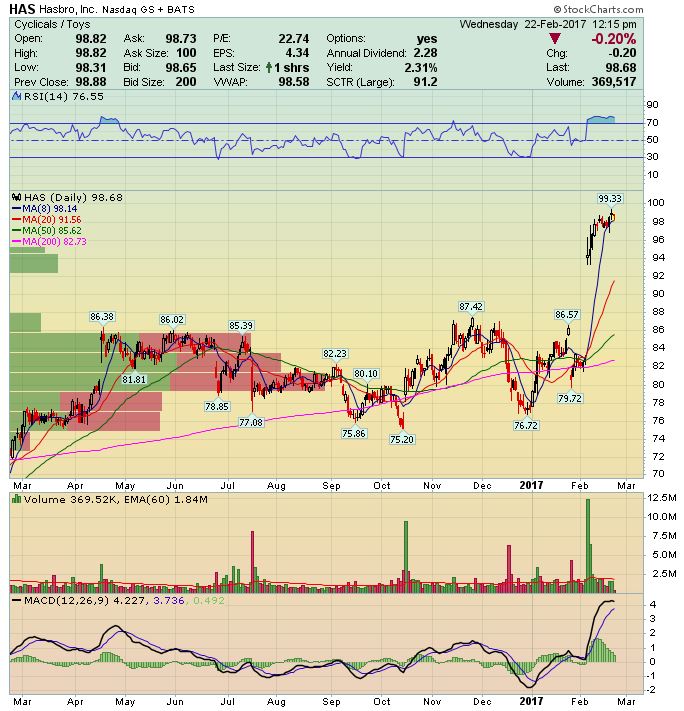