HeadHunter is a leading online recruitment platform in Russia focused on connecting job seekers with employers. It offers potential employers and recruiters paid access to their extensive curriculum vitae (CV) database and job postings platform. It also provides job seekers and employers with a value-added services (VAS) portfolio centered around their recruitment needs. 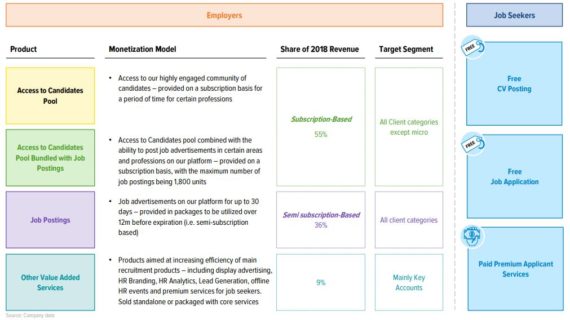 Last earnings, the company reported total revenue increased 30% Y/Y with its Russia segment up 29.1%. This was driven by an increase of 39.7% in the number of paying customers in Small and Medium Accounts (SMA) as well as an increase of 19.9% in the average revenue per customer in Key Accounts (KA) in Moscow and St. Petersburg.

Credit Suisse would highlight that given that Q3 had one more business day (66 versus 65 in Q318, or ~1.5% impact), the normalized growth rate was 28.5%. The updated guidance implies Q4 revenue to meaningfully decelerate to 20.2% Y/Y, due to tougher comparisons from the cancellation of free tier job posting packages in some regions that drove a step up in paying users.

Management would also offer an initial look of pricing increases for 2020 that will drive monetization for its products. The price for CV Database Access is expected to increase 16% for its Moscow Region and 10-20% for Other Regions of Russia. The price for single job posting will increase modestly by 5% to encourage SMA customer intake while the large package price could increase as much as 56% in the KA segment. Despite the relatively large increase, management expects immaterial impact to churn given it still accounts for a small portion of corporate budget. Unfortunately, JPMorgan believes that this price increase strategy may backfire leading to market share losses as competition looms.

On the most recent earnings call, management confirmed that its closest private competitor, SuperJob, introduced unlimited tariffs into the market boosting job posting activity on its platform. HHR also confirmed signs of more aggressive performance from other market players such as Avito (owned by Naspers), Rabota.ru (owned by Sberbank) and Youla (owned by Mail.ru).

JPMorgan would comment that they have seen a similar scenario unravel in the Russian seaport industry. While they acknowledge significant/major differences to HHR, they note that Global Ports lost market share as it was being under-cut by competitors (GLPR’s share went from 35% in early 2016 to ~28% in 2018). While GLPR eventually gave in and began providing substantial price discounts to its clients, to date it has not been able to recover its market share losses.

Fast forward to January 21st where VKontakte, or VK, (Russia’s largest social network owned by Mail.ru Group) announced deeper integration with Worki (a product of Youla also owned by Mail) in the job classifieds division. The social network reportedly launched an “interview functionality” within the so-called “Worki Mini App” inside VK instant messenger. The interview with a potential candidate will reportedly be conducted in a private messenger dialogue window inside VK, once both sides agree to proceed. The interview chatrooms will be clearly separated from regular user chats to avoid confusion. More importantly, VK promises to ensure that user privacy is protected by restricting access of the employer to the VK profile of the prospective applicant. 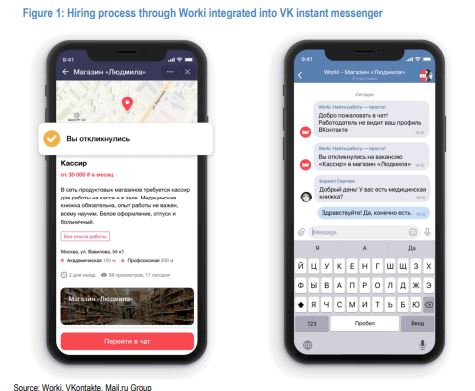 According to a study done by Worki, 70% of sourcing of prospective applicants in the blue-collar segment is done through various forms of messaging. Another study suggests that 60% of jobseekers prefer to communicate with potential Employers via instant messengers. With the newly introduced functionality Worki hopes to ease and expedite the hiring process for potential corporate clients.

JPMorgan analyst Alexei Gogolev would say in his note, “The abovementioned effort by Worki, which will most likely be supported by traffic originating on Mail.ru Group sites, confirms tightening competition among classifieds platforms on the Russian jobs market. We therefore think HHR’s pricing power may be limited by rising competition and worry that the company may be forced to review its aggressive pricing strategy over the next 12M in order to defend its 50%+ market share.” 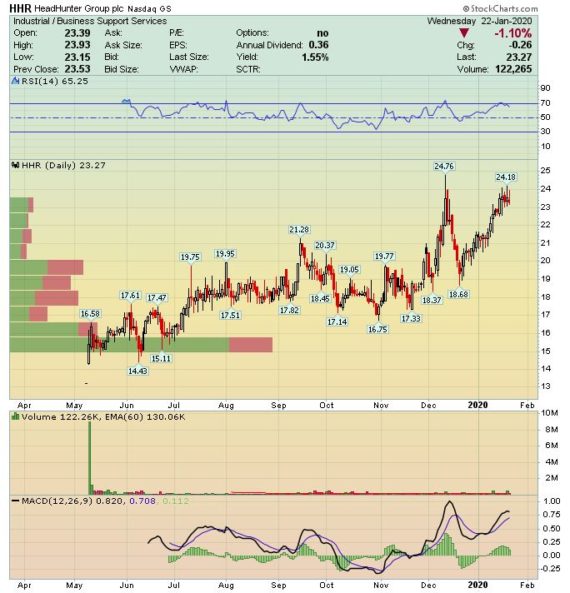