Discussed this morning in Conversations, Inari Medical (NARI) is a medtech company focused on products for patients suffering from venous diseases. The company’s main products include ClotTriever for treatment of deep vein thrombosis and FlowTriever, a thrombectomy system for treatment of pulmonary embolism.

In early August, the company reported EPS of ($0.19) vs ($0.23) estimate along with Revenue of $92.7M vs $87.8M estimate. Revenues increased 46% Y/Y and 7% Q/Q. Management did say that they saw additional revenue based on more rapid than expected stocking and adoption of their entry sheets, essentially transferring some of their Q3 expected revenue into Q2. Despite the revenue beat, the company only re-affirmed its previous FY22 revenue guidance in the range of $360-$370M. Canaccord Genuity believed that since a majority of the Q2 beat was mostly a function of stocking revenue in the quarter, there was no justification for raising revenue estimates at this time. Inari also noted that it continues to see hospital staffing issues impact procedure volumes. In particular, it sees impact from less interventional capabilities at hospitals with staffing shortages, as well as hospital censuses being lower due to less staffed beds.

Also, in conjunction with its Q2 results, the company issued a press release announcing the transition of the CEO role to Drew Hykes, current COO, from Bill Hoffman, effective January 1st, 2023. Mr. Hykes has been with Inari since 2017, joining as CCO and then becoming COO in 2020. Mr. Hoffman has no professional plans, saying the transition is because of personal matters, and plans to continue to serve on NARI’s Board of Directors.

BofA was out with a note this morning highlighting their checks with one doctor who is using Inari’s new products. Initial feedback suggests they will likely be competitive against the likes of Penumbra (PEN) and Surmodics (SRDX). More specifically, analyst Travis Steed would say:

For Artix…”The doctor has been really impressed with Artix and the distinguishing features were things that really sold him with the balloon being the biggest selling feature. The doctor believes the chances of distal embolization is a lot less and maintaining guidewire access is huge. On feedback for Inari, the doctor talked to Inari about maybe considering an even smaller device for the tibials. The Artix device goes to 3mm but tibial arteries are smaller around 2mm or even smaller and this device isn’t technically designed for vessels that small. He mentioned Inari could also consider a larger device for aortic, which would be in a minority of cases but tibial is very common so would be good to have device for that. The doctor noted Artix would mostly be for femoral popliteal arteries and maybe proximal tibial disease.”

For ProTrieve…“The doctor has used Protrieve in a case and said the device is awesome. When doing complex DVT cases, especially those involving inferior vena cava (“IVC”), one of the things doctors worry about is PE. He said there are various things one can do like an IVC filter to prevent PE, but it is always something of concern. This device is one of Inari’s t24 devices, which is a FlowTriever catheter, but it opens up like basket. You put it up from the jugular vein and open a filter, which remains in place through procedure. Through the device one can also introduce other catheters. The doctor gave an example of a 6 hour case on a patient that was very complex case with multiple clots in different veins and he had serious concerns that he would cause PE which could kill the patient, so he placed this device from the jugular vein and said it was easy to use and it worked exactly as Inari described.”

A few days after the company’s Analyst/Investor Day, the Transcatheter Cardiovascular Therapeutics (TCT) Conference will be taking place. Per management commentary, the in-hospital and 30-day results from the fully enrolled 800-patient U.S. cohort of its FLASH registry will be presented on September 18th. The study evaluates short and long-term clinical outcomes of patients treated with the FlowTriever system, including safety results, on-table hemodynamic improvements, and hospital resource utilization.

Then, at the end of October, the VEINS Conference will be taking place in Las Vegas where the company’s in-hospital and 30-day outcomes of the fully enrolled 500-patient, multi-center CLOUT registry will be presented. CLOUT is the largest prospective mechanical thrombectomy study ever conducted in the field of DVT. The study evaluates the safety and effectiveness of the ClotTriever system including thrombus removal, hospital resource utilization, and long-term clinical results.

Lastly, also to be presented at VEINS, is a propensity-matched comparison of patients treated in the CLOUT registry versus patients treated with pharmacomechanical thrombolysis from ATTRACT, an NIH-sponsored randomized controlled trial. Outcomes include procedural metrics, effectiveness of thrombus removal, and clinical results through 30 days. 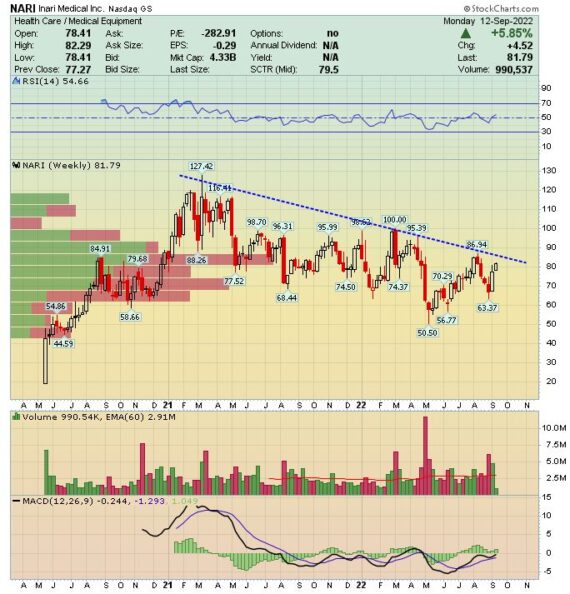