We haven’t covered this name in a few months, but last week, primary shareholders Frank (the CEO) and Lorenzo Fertitta purchased just over $37M worth of stock ranging between $18.65 and $18.71. As BAML wrote, this is a significant purchase and an important signal for the company, validating their faith in Red Rocks’ direction and the value proposition of about $1B in re-development projects at the Palms and Palace Station. The purchase increases their ownership stake to just over 40% from 39% previously.

While shares started the year off well, the stock is now down 5% YTD and is coming off what Stifel called a “messy” Q2 earnings that saw:

Management would mention that they saw an impact of approximately $11.3M of one-time expenses related to the Palms grand opening weekend in April and the property’s national branding and marketing campaign. Excluding this impact, adjusted EBITDA for the Las Vegas operations was effectively flat at $113M while margins decreased 390 basis points. The net revenue performance was driven by significant growth of the Palms and Palace Station across both gaming and non-gaming segments of their business.

CFO Stephen Cootey would remind everyone that both of these completely transformed properties are still in the process of ramping up, and they continue to expect these investments to generate significant returns for the company over time.

More specifically, “And the key and final components of Phase 3, Michelin-starred dimsum restaurant, Tim Ho Wan from Hong Kong and the addition of 16 new gaming tables in the west expansion area are expected to finish in mid-September. Once fully complete, this one of a kind reinvestment will touch nearly aspect of the iconic property, and we are confident that the Palms will be one of the premier gaming and entertainment destinations in all of Las Vegas.”

In a post-earnings note, Stifel analyst Steven Wieczynski would comment that management remains confident in the property’s ability grow at a pace of double the market and bring margins back up over time, reaching an inflection point in September where free cash flow growth should begin to accelerate.

In addition, regarding the potential for cannibalization at the Palms due to the property’s “hybrid” customer mix, management noted they had actually seen the opposite effect. Since the launch of the Palms, cross-play has increased, driving organic growth to “second stop” properties.

Lastly, management reeled off a litany of statistics arguing in favor of the strength of the Las Vegas Locals market, and considered alongside competitors’ recent quarterly results in the region, Stifel is inclined to agree with their assessment. “Along with favorable macro tailwinds such as employment and wage growth, $20B of new capital investment in the area, including projects such as the new NFL stadium and convention center expansion, bodes well for RRR’s Las Vegas assets.”

Finally, with regards to its Native American segment, it delivered strong results with management fees of $22M, an increase of 10.9% over the prior year, driven by solid performance at Graton Casino and Resort.

However, management would comment on its North Fork project, where they continue to see progress, but note that there are a few remaining litigation-related items.

More specifically, the company indicated it is still waiting for the California Supreme Court to rule on a similar situation involving another tribe before it will hear the North Fork case. 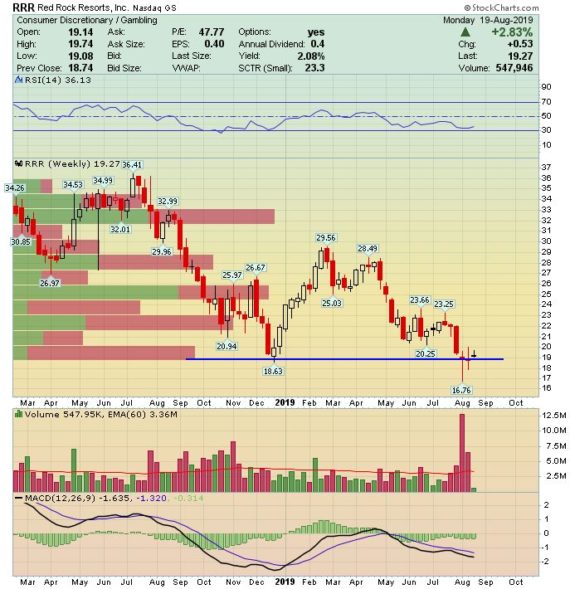